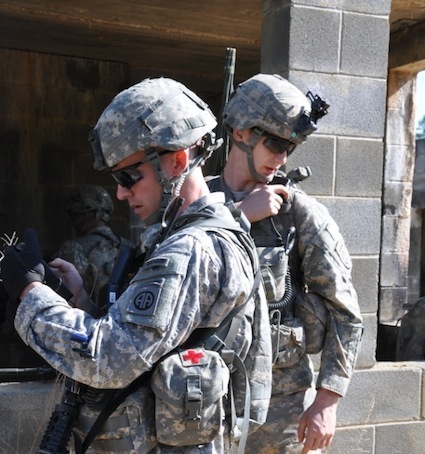 Paratroopers from the 3rd Brigade Combat Team of the 82nd Airborne Division use radios and smartphones to communicate during a recent field exercise at Fort Bragg, N.C. Photo Credit: Ashley Blumenfeld, JPEO JTRS.

He pulled a smartphone from his uniform and entered the information into an app, immediately transmitting warning graphics to his buddies and higher headquarters.

“If we see an enemy up front, we could put it in the GPS system,” said Bui, a member of the 3rd Brigade Combat Team of the 82nd Airborne Division. “Even though they (fellow Soldiers) can’t see it, you can mark it for them.”

The device, known as a Joint Battle Command-Platform, or JBC-P Handheld, is the first developed under an Army effort to devise an Android-based smartphone framework and suite of applications for tactical operations. The government-owned framework, known as Mobile /Handheld Computing Environment, or CE, ensures that regardless of who develops them, applications will be secure and interoperable with existing mission command systems so information flows seamlessly across all echelons of the force.

This framework, originally prototyped by MITRE, is now being developed at the Software Engineering Directorate in Huntsville, Ala., with the JBC-P family of systems and is aligned with the Assistant Secretary of the Army for Acquisition, Logistics and Technology Common Operating Environment, or COE strategy.

“Using the Mobile /Handheld CE Product Developers Kit, we’re going to allow the third-party developers to actually develop capabilities that aren’t stovepiped,” said Lt. Col. Mark Daniels, product manager for JBC-P. JBC-P, which will be fielded to both the Army and the Marine Corps beginning in fiscal year 2013, is the follow-on program of record for Force XXI Battle Command Brigade and Below/Blue Force Tracking, or FBCB2/BFT.