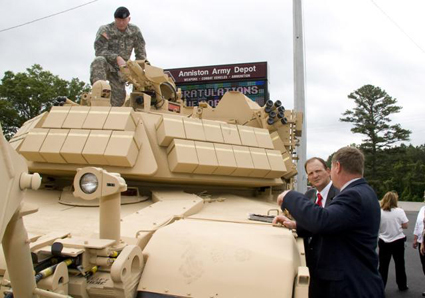 ANNISTON ARMY DEPOT, Ala. — During a joint roll-out ceremony here May 14, Department of Defense program managers commemorated the production of two vehicles intended to help the U.S. military travel in battle at a faster, safer rate.

The Joint Assault Bridge and the Assault Breacher Vehicle are tracked vehicles both manufactured at the depot by government civilians for use by the U.S. Army and the U.S. Marine Corps. These two programs are successful because of the partnering efforts of the depot, U.S. Army Program Executive Office and Marine Corps Systems Command.

The depot serves as the prime systems integrator for both the ABV and JAB vehicles, introducing a manufacturing process unique for depot employees, as they are most often known for upgrading, overhauling and repairing tracked combat vehicles and Strykers.

Prototypes for both vehicles were designed by the Marine Corps. The hulls for each system are from the chassis of refurbished M1 tanks. All other parts and components mated to the hull are new to the DoD inventory. In other words, turrets for the ABV and JAB are made from new materials and not from used tank parts.

“Anniston can do what industry can do and do it at a better price, saving the taxpayer a lot of money,” said Joseph Augustine with the Marine Corps.

Leaders here said the depot workforce is to be commended for its willingness to adapt to new production processes and for its intensity in knowledge and skill when it comes to vehicle manufacturing.

Already about 30 ABVs have been fielded to Marine units for training purposes. It’s designed to breach minefields and complex obstacles and provide a deliberate and in-stride breaching capability for the Marine Air Grounds Task Force and the Army Heavy Brigade Combat Team.

Production of the JAB is still in the testing phase; only five have been completed for design evaluation.

The JAB has atop it a 60-foot bridge that can be launched when other tracked vehicles like the M1 main battle tank need to cross wet or dry terrain.

“These vehicle capabilities help guarantee the lethality of the Soldiers and Marines,” said Depot Commander Col. S. B. Keller.

ANNISTON ARMY DEPOT, Ala. -- During a joint roll-out ceremony here May 14, Department…