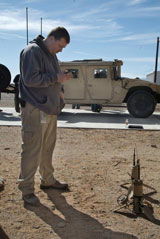 Soldiers — along with technicians for the companies that produce the various systems that make up FCS — are loading up vehicles with data collection equipment that will be used to test the systems later this year.

Armored and un-armored Humvees are getting Network Integrations Kits and data recorders installed that will allow them to communicate with unmanned ground sensors, aircraft, and man-portable robots and record the data that the systems will share with each other. Technicians then test the connections and ensure that all the different systems will be ready when put in the hands of the Soldiers that will be testing the new equipment.

The test itself will have Soldiers use FCS’ networked systems to share information.

“We’re taking all this data and information and putting it all together to create a common operating picture,” said Capt. Marc Cervantes, assistant program manager for FCS’ Spin out 1.

The systems that will be involved in the test include:

• Tactical and urban unattended ground sensors, which are small easy to conceal pods loaded with various detection equipment, and wirelessly connected to the FCS network to allow Solders to monitor large areas with fewer troops.
• The Class I UAV, a remotely operated flying vehicle smaller than a foot locker, equipped with various cameras and designators,
• The Small Unmanned Ground Vehicle, a man-portable remote-controlled robot, also equipped with cameras and designators.

Using wireless technology, all these systems will connect together, giving the Soldiers using them a larger and clearer picture of the battlefield than each system would provide by itself. It is this connection and integration of different components acting as one that officials say makes FCS a “system of systems.”

Though designed to connect and work together, many of FCS’ different systems are made by different companies, so preparing for tests requires coordination between the different military, government and civilian entities involved in the program.

The intent of networking all the FCS systems together is to give the war fighter a better ability to communicate and share information. Providing Soldiers with the ability to access multiple sources of information about the battlefield aims to give them an increased sense of situational awareness, or knowledge of where they are and what is around them.

“Anytime a Soldier is in any environment, his life could be on the line, and a Soldier is the greatest asset that the Army has,” Cervantes said. “To give the Soldier what he needs to be successful in peacetime and in wartime is what we’re working toward.”

Developing FCS during the middle of a war on terror has allowed the program to get input from experienced combat veterans.

“Because of the current situation, we’ve integrated a faster line of communication from what the war fighter is doing to what we’re developing… while we are producing this new technology, we have Soldiers giving us direct feedback, and the majority of those Soldiers have been in combat,” Cervantes said.

Before testing on this new equipment can begin, however, the Soldiers that will be conducting the tests will have to be trained to use it. Soldiers will begin training on the use of the unmanned systems and the control and networking equipment mounted in the Humvees so that they will be fully prepared to it in the test with the same level of proficiency they would in the field.