The US Army Rangers is the oldest special operations force in the United States military, dating to before the American Revolution. Rogers Rangers, the forerunner of today’s Rangers, were an elite light infantry unit during the French and Indian Wars. Other units have borne the title “Rangers” over the last 250 years including Mosby’s Rangers during the Civil War and the World War II Rangers. Today’s 75th Ranger Regiment dates to 1974 when the 1st and 2nd Ranger Battalions were reactivated. 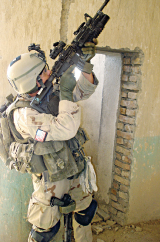