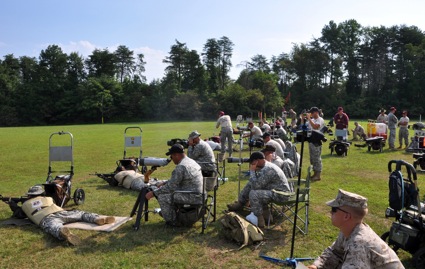 MARINE CORPS BASE QUANTICO — Soldiers, Marines, Airmen and Sailors fire on their targets during the 10-man Intereservice team championship match July 27. The Soldiers from the U.S. Army Marksmanship Unit won the match and swept every major award at the 49th Interservice Rifle Championships, giving the Army victories at every Interservice marksmanship competition in 2010.
(Photo by Michael Molinaro, USAMU PAO)

Soldiers with the U.S. Army Marksmanship Unit’s Service Rifle team braved the heat and stiff competition to uphold the Army’s reputation as the military’s best marksmen and came out on top at the 49th Interservice Rifle Championships.

With their accomplishment, the USAMU enabled the Army to complete a sweep of all Interservice marksmanship championships in 2010-Soldiers and teams from the USAMU previously won the shotgun and pistol Interservice competitions, as a team and individually.

“We know that the Army expects us to be the best,” said Lt. Col. Daniel Hodne, commander, USAMU. “The USAMU’s Service Rifle section has maintained a cumulative string of victories at the Interservice Rifle Championships since 1995, when the USAMU Custom Firearms Shop introduced the accurized M16A2/A4, which replaced the M14, as the USAMU service rifle for competition.” 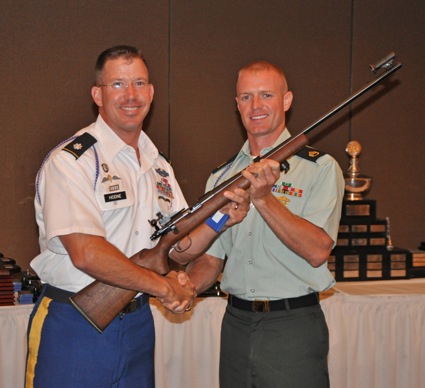 Two newcomers to the USAMU service rifle team had outstanding results at their inaugural interservice championship. Steinbach won the Excellence-in-Competition match with a score of 488-14x. He also won the Air Force match. Elsenboss won the individual long-range championship with the service rifle, scoring a 394-10x.

Ward won the 1,000 yard service rifle match, and Gallagher won the Navy match and overall high woman to round out the individual accomplishments.

The importance of the USAMU’s gunsmith’s efforts to enhance the performance of the M16 should not be understated, said Hodne. That expertise and the lessons learned went into the unique Squad Designated Marksman Rifles designed by the USAMU to enhance the lethality of the warfighter.

“The Army continues to make history in Interservice Rifle competition,” Hodne concluded. “I am extremely proud of our noncommissioned officers, Soldiers and civilians. The Army is the undisputed champion in all aspects of Interservice marksmanship competition because of the capabilities that are unique to this distinct unit.

“With an unbeatable combination of our Shooter/Instructors, our gunsmiths, our ammunition test personnel, and our coaching staff, the Army has been viewed by the other services as the team to beat for several years running.” 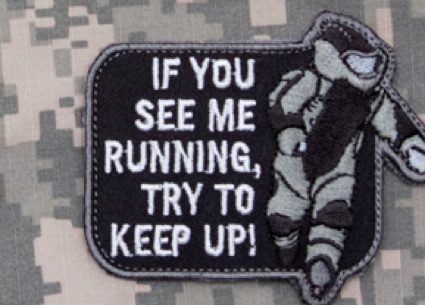 MARINE CORPS BASE QUANTICO -- Soldiers, Marines, Airmen and Sailors fire on their targets…