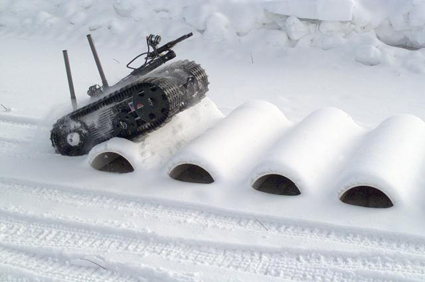 ABERDEEN PROVING GROUND, Md.– The U.S. Army has traditionally acquired weapon systems through a process that can take several years, but the ongoing fight in Afghanistan and Iraq has shortened the time frame considerably.

Robotic systems that can save lives on the battlefield are getting into Soldiers’ hands more rapidly than ever before, and the Army Developmental Test Command is transforming its business practices to support that effort.

James Johnson, DTC executive director, said test and evaluation to support rapid fielding of both manned and unmanned systems have been streamlined in recent years.

“In a traditional program, we would test in a hot, cold and tropical environment, and maybe do a lot of other environmental testing,” he said. “For some of the rapid acquisition programs, we have left out testing in the cold, for instance, and left out the tropics. So we know fairly well how systems are going to behave in Iraq or Afghanistan.”

Developing test reports for acquisition program managers and Army evaluators also has become a speedier process. Instead of issuing a “pass/fail” report for many of the systems the Army needs, ATEC provides reports on their capabilities and limitations. The command also deploys testers to the theater of operations to help the Army Test and Evaluation Command assess how systems perform there, Johnson said.

“Because we are not getting to do as much testing as we would necessarily like on this end, we are sort of catching up to the equipment out in the field,” he said. “We’re seeing how the equipment is operating, and we’re providing expert advice to the Soldiers who are operating that equipment. That is quite different.”

Rapid acquisition is not the only issue DTC is working to address. Keeping costs down for test customers is a key objective of the command, Johnson said, noting that DTC is constantly tackling the challenge of reducing costs to customers.

“We’ve always got to have a reasonable cost, do testing on time and provide a quality product to the customer,” he said. “When you get into these newer commodity areas like unmanned ground systems and aerial systems, that adds to the challenge because we have to learn a new technology, maybe something we’ve never tested before. Then we’re trying to do all of that in a period when budgets are tight. Shrinking budgets are always on our minds, and we’re trying to figure out how we can cut our costs and be more efficient in order to answer budget challenges.”

DTC has the instrumentation and facilities needed to tackle the challenges associated with testing the new unmanned systems, but its test procedures must evolve to be appropriate for them, both on the ground and in the air, Johnson said.

“For those new commodities, procedures are being developed, and it comes down to safety concerns, for example,” he said. “We talk about unmanned aerial vehicles operating in the same airspace as manned vehicles, and we haven’t yet come to grips fully with how we can operate in the same airspace. That’s something we’re working on with the Federal Aeronautics Administration. Right now, it is driving a lot of tests out to our western ranges, where there is a lot of airspace and not a concern with them running into a manned aircraft.”

“If you remotely operate a large vehicle like a Humvee, for example, and the vehicle goes out of control because the remote operator loses contact with it, it could run over and kill somebody,” he said. “So procedurally we’re taking a look at how we test those kinds of things.”

DTC’s test customers for robotic systems include the Army’s Rapid Equipping Force as well as the Defense Department’s Robotic Systems Joint Project Office and the Joint Improvised Explosive Device Defeat Organization. They are all involved in the acquisition of various robotic systems intended to enhance war-fighting capabilities and prevent casualties from roadside bombs and other threats.

The RSJPO is aligned to support, field and sustain ground robots along three primary mission areas: maneuver, maneuver support and sustainment, said Jeffrey Jaczkowski, one of the people working the acquisition of unmanned systems at the Program Executive Office, Ground Combat Systems, in Warren, Mich.

Some of the most urgently needed and fielded systems are Soldier-portable unmanned ground vehicles. Among these are the PackBot, TALON and MARCbot and their variants. These are relatively small robotic systems whose payload and configurations depend on the mission they are used for, Jaczkowski said.

Systems such as these are “tele-operated,” meaning an operator can control them while looking at video feedback for command and control decisions and local situational awareness. The payloads that can be mounted onto system platforms depend on their mission. In the future, some may include weapons, Jaczkowski added.

In the sustainment category, the Marine Corps is developing a tele-operated front-end loader, Jaczkowski said. Another tele-operated system is integrated on a Humvee, designed to be a decoy out front of a convoy, he said. The Defense Department also is looking to field a system called the Saratoga, designed with sensors to detect chemical, biological, radiological, nuclear and explosive threats, he added.

The Multifunction Utility/Logistics Equipment vehicle, or MULE, is another unmanned platform that will require both developmental and operational testing. The MULE variants are designed to transport equipment and supplies in support of dismounted maneuver elements.

“For the robots that we have fielded, the mission application includes surveillance and extended standoff from the Soldier/operator to around the corner, into a building, structure, cave, tunnel or dwelling,” Jaczkowski said. “That basically allows the Soldier or Marine about a kilometer of standoff to go do some surveillance or interrogation.”

Jaczkowski said such systems include the MARCbot and xBot — both are Soldier-portable systems. Larger systems include the MV-4, used for area clearance. The 5-ton MV-4, for instance, is a remotely operated tracked vehicle using a flail and hammer to dig up and destroy or activate mines. Its small dimensions and low track-ground pressure allow the machine to pass over difficult terrain, including steep slopes.

“That is approaching Milestone C, but we have contingency systems in use for both Iraq and Afghanistan,” Jaczkowski said. Milestone C signifies that a system has gone through system development and demonstration and is ready to enter the production phase of acquisition.

Both Jaczkowski and James Van Coillie, chief of the Product Assurance/Test and Configuration Management Division within the RSJPO, said DTC has done a good job of facilitating the fielding of unmanned systems through expeditious testing. They see DTC as a reliable partner in the acquisition process, and it is generally very supportive of fast-track acquisitions, Van Coillie said.

“When we get operational needs statements and joint operational needs statements that are funded through a REF or a JIEDDO initiative, it is a very fast acquisition process to meet some very streamlined schedules,” Van Coillie explained. “We work together with DTC and ATEC, coordinating the appropriate tests in order to evaluate these platforms for users and certify that they are safe and that we acknowledge any kind of limitations they have. We are challenged to perform all necessary tests in order to determine the system’s capabilities and limitations, and meet the Soldier’s needs for urgent fieldings.

The development of military robotic systems is moving from platforms that are tele-operated to those that have autonomous capabilities, meaning they can sense their environment, adapt to it and respond without a command from an operator, Jaczkowski said. Properly testing such systems will require a close collaboration between the acquisition community and testers, he said.

“There are challenges to work through that I see in the future, especially with FCS coming. The test community and the PMs need to start thinking about how are we going to test and get through this together.”

Because the Defense Department still has a long way to go in developing the capabilities of robotic systems, DTC will continue to adapt, to support the testing that future unmanned systems will require, Johnson said.

“The Department of Defense has not tapped into all the capabilities that these unmanned systems can bring to bear,” he said. “That just brings it back to DTC and how we’ve got to make sure we’re progressing along with those unmanned systems, in our expertise, in our capabilities and in our instrumentation, so that as unmanned systems become more and more prevalent, we’re going after that business. It’s an exciting time to be involved in that kind of commodity.”

The stars and stripes have inspired a sense of pride and service in American patriots for almost 250 years. In the same way, the story of Capt. William Driver’s “Old Glory” flag has inspired many Americans during times of trial. Capturing the spirit and history of our stars and stripes is the new Old Glory […]