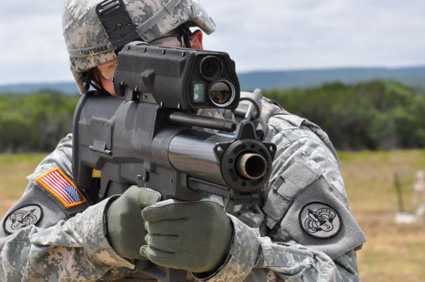 FORT BELVOIR, Va.– A Soldier successfully shoulder-fired a “smart” High Explosive Airburst, or HEAB, round for the first time Aug. 11 from the XM-25 weapon system at Aberdeen Test Center, Md.

The Army plans on purchasing more than 12,500 XM-25 systems starting in 2012, which will be enough to put one in each Infantry squad and Special Forces team, according to officials at Program Executive Office-Soldier.

At first glance, the XM-25 looks like something out of a Sci-Fi movie. It features an array of sights, sensors and lasers housed in a Target Acquisition Fire Control unit on top, an oversized magazine behind the trigger mechanism, and a short, ominous barrel wrapped by a recoil dampening sleeve.

Unlike a Hollywood prop, however, this weapon is very real and designed to accurately deliver an explosive round that neutralizes targets at distances of up to 700 meters – well past the range of the rifles and carbines that most Soldiers carry today.

“What makes this weapon system truly revolutionary is the ability to target the enemy, pass on this information to the sensors and microchips of its 25mm HEAB round, and have that round detonate over the target,” explained Maj. Shawn Murray, a Soldier Weapons assistant product manager in PEO Soldier, the organization responsible for developing the XM-25.

“When the HEAB round explodes, the target is peppered with fragmentation,” Murray said. “Our studies indicate that the XM-25 with HEAB is 300 percent more effective at incapacitating the enemy than current weapons at the squad level.”

Because of the XM-25’s unique TAFC and HEAB round, Soldiers will be able to engage enemy forces located in the open and “in defilade” -behind cover, such as walls, rocks, trenches, or inside buildings. The semi-automatic weapon’s magazine holds four 25mm rounds and can be employed at night or during inclement weather thanks to the XM25’s built-in thermal sight.

After only five minutes of instruction at the Aberdeen Test Center, Sgt. Logan E. Diveley from the 180th Infantry Regiment was able to put his first HEAB round through a building’s window and take out an enemy mannequin at 200 meters.

When asked what he thought of the weapon, Diveley responded, “I’ve been in over nine contacts with the enemy during my two tours in Iraq. Their ambushes were usually initiated with an IED and followed up with small arms fire from behind walls and buildings, places where it was hard for us to get at them. The XM-25 would have taken care of things and made our jobs much easier.”

Once downrange and in the building where the defeated enemy mannequin lay, Maj. Murray noted the limited collateral damage associated with the XM-25.

“Because of its pinpoint accuracy and relatively small warheads, the XM25 can neutralize an enemy without the need to destroy a whole building,” Murray said. “For our counter-insurgency operations to be successful, it is important to keep collateral damage to a minimum and to protect the civilian population. I think the XM-25 will prove itself many times over in Afghanistan,” Murray said.

The XM-25 is being developed by PEO Soldier, the Army acquisition organization responsible for nearly every piece of equipment worn or carried by Soldiers. This includes items ranging from socks, to weapons, to advanced sensor and communication devices. PEO Soldier bases much of its work on the feedback from individual Soldiers, developing or procuring solutions to meet those needs.

The development of the XM-25 is one such a program, designed to provide Soldiers a solution for dealing with enemies in the open and behind cover that is more precise, quicker to employ, and more cost effective than mortar, artillery, or airstrikes.

A Battlefield Scenario for the XM-25

An American patrol nears a walled, Afghan village when an enemy combatant looks over the wall and fires his AK-47 rifle at the oncoming U.S. Soldiers. The Americans return fire with their rifles and maneuver, but find it difficult to neutralize the enemy rifleman who repeatedly exposes himself for only a second, shoots, then ducks behind the thick wall. At this time, the patrol leader calls for the XM-25 gunner to take action.

Immediately, the XM-25 gunner aims the laser range-finder at the top of the wall where the enemy last ducked down. The gunner presses the laser range finder button on the front of the XM-25’s trigger guard and records a distance to the wall of 451 meters. The distance is displayed on the TAFC’s optical lens along with an adjusted aim point, or “cross hair,” to help the soldier better aim the XM-25.

The adjusted aim point takes into account air pressure, temperature, and the ballistics of the 25mm round for the given range of 451 meters. The soldier then uses the increment button on the trigger guard and adds one more meter to the firing solution since the enemy combatant is about one meter behind the wall.

Upon pulling the trigger, the TAFC programs the HEAB round in the chamber of the weapon, telling the round to explode at 452 meters from launch point. The HEAB round departs the rifled barrel, arms at 30 meters, clears the top of the wall at 451 meters and explodes its two warheads at 452 meters, right above the enemy. The entire firing sequence takes the gunner less than five seconds to aim and fire and another 2.5 seconds for the round to fly and explode over the target, thereby clearing the way for the patrol to resume its mission.