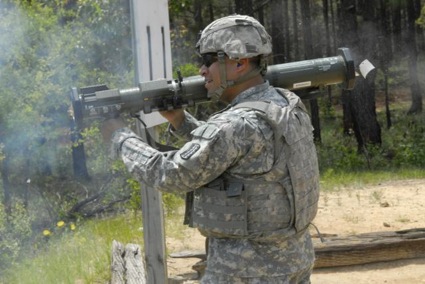 Staff Sgt. Cesar Diaz, of D Company, 2nd Battalion, 29th Infantry Regiment, fires an 84 mm tactical round out of an AT4 Confined Space launcher May 25 during the Maneuver Battle Lab experiment at Duke Range on Fort Benning, Ga.

The Maneuver Battle Lab spent four days evaluating a pair of sub-caliber training rounds for a shoulder-launched weapon used to engage armored vehicles from confined or enclosed positions to identify which one best prepares Soldiers to fire the real thing.

Fourteen Soldiers from 2nd Battalion, 29th Infantry Regiment, fired 9 and 20mm rounds in the AT4 Confined Space launcher and compared their effectiveness and suitability to the 84mm live version. The experiment took place May 24-27 at Duke Range.

The AT4CS is a lightweight, disposable weapon designed for single use, said Steve Howard, a project officer for the Maneuver Battle Lab’s Soldier team.

“It is safely and effectively fired from confined space to defeat various military targets, including light-armored vehicles, at both near and extended ranges,” he said. “(But) currently, there is not a sub-caliber training round for the AT4CS.”

A standard AT4 produces a large back blast. The CS model, however, features a counter mass that could allow troops to fire safely and effectively within buildings in an urban environment.

Justin Strayer, a close combat systems analyst for the Soldier Requirements Division, said the AT4CS can be fired from a 12-by-15-foot room that has a 7-foot ceiling – without triggering any blast overpressure or back-blast hazards.

The Directorate of Training and Doctrine established the requirement for a sub-caliber training round to replicate the actual system’s launch effects and trajectory when fired, Howard said.

“This could provide Soldiers with a more realistic training system,” Strayer said.

The 9mm training round even includes a back-blast charge for added simulation to the live weapon.

“The sub-caliber trainers give Soldiers a duplicate of a live round without having to fire a live round,” said Styles Underwood, a DOTD shoulder-launched munitions training developer. “That’s just going to help the Soldier in combat.”

It could mean considerable savings for the Army, too.

The cost of firing an 84mm tactical round is about $4,500, at least 100 times more than the two trainers, which are $40 to $50 each, said Anthony Sacco, a project officer with Project Manager Close Combat Systems who was among the observers from Picatinny Arsenal in New Jersey.