WASHINGTON– In the past several years, Army efforts to increase safety has decreased the number of Soldier deaths due to off-duty activities such as motorcycling.

“We’ve made considerable progress in the last four to five years — 2005 was probably our pinnacle … in which we had the most fatalities and accidents as a military service,” said Tad Davis, deputy assistant secretary of the Army for Environment, Safety and Occupational Health, during a roundtable with bloggers, June 19.

Davis said that since combat operations began in 2001, the number of accidents resulting in deaths had climbed continuously — peaking in 2005. That year, the Army lost 299 Soldiers due to accidental, non-combat deaths — 144 of those were due to loss of life in personally owned vehicles.

“Subsequent to that, we published the first-ever Army strategic plan for safety and occupational health — bringing together those two important areas for the very first time, (and) establishing long-term strategic goals for the Army in a way that would resonate at every level for the command and require commands down to the battalion or installation level to develop their own safety and occupational health plan to focus on their own particular needs,” Davis said.

“I think we made significant progress, steadily since 2005,” he said. “Areas that continue to be the greatest concern for us in terms of fatalities and injuries due to accidents are off-duty, related to personally owned vehicles and motorcycles.”

Last year, Davis said, the Army lost 51 Soldiers due to motorcycle accidents. This year, the Army has lost 21, where it had lost 33 at the same time last year — he attributes Army efforts for the decline.

“We think we have the right mix of programs, both online and hands-on programs, that our Soldiers and civilians go through to receive certification training on motorcycle operations, as well as mentorship programs and motorcycle clubs that really enhance the skills they learn — so we are making progress in that particular area,” he said.

The Army is also experiencing about 16 percent less fatalities due to sedans, sports utility vehicles and small trucks, Davis said. “I think it’s a good thing, but we don’t want to stop there.”

Davis said in an effort to further curb accident-related casualties and fatalities, the service has put “expanded emphasis” on the battle-buddy concept, and is also working to change cultures in organizations so that everyone in an organization understands their roles in promoting and ensuring safety. The Army also now uses the Travel Risk Planning System, or TRiPS, to help Soldiers plan travel for vacations and extended pass.

“Where are the risks associated with the Soldier who is going on a four-day pass starting on Thursday at midnight and he is going to St. Louis, Mo. from Fort Bragg, N.C. — what doesn’t fit within that picture?,” Davis said. “TRiPS has become an integral part of what we are trying to do to enhance the understanding of some of the risks (taken) by the Soldiers.”

“It’s important, regardless of what we are doing, whether it is a Saturday night or it’s on a deployment, or getting ready to go on an airborne operation at Fort Bragg,” Davis said. 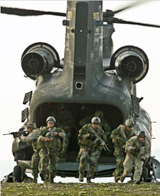 WASHINGTON-- In the past several years, Army efforts to increase safety has decreased the…