The Kalashnikov, easily one of the most prolific and influential firearm designs of all time, has a bit of a tortured history on these shores. Due to the nature of its origin and the realities of the Cold War-era of the 20th century, opportunities for owning a semi-automatic Soviet-bloc variant of this firearm could be few and far between.

With the collapse of the Soviet Union in the early 1990s, many doors were opened to the West in regards to the importation of firearms from these nations. As a result, offerings from countries like Romania and Bulgaria were suddenly available, giving US consumers a chance to own Eastern European Kalashnikov variants. However, due to legal wrangling and the side effects of post-Cold War trade agreements, true Russian Kalashnikov variants in original military-style configurations were practically unavailable in this country.

However, Arsenal Inc., a company known for its line of extremely high quality Bulgarian-based Kalashnikov variants, is now offering a rifle that seeks to remedy this situation. It is accomplishing this by offering a production model semi-automatic variant of a true Russian Kalshnikov, available right here in the United States. The rifle is the SGL20, and it is the result of a joint effort between Arsenal Inc. and Legion Ltd., the custom shop of the Izhmash Arms Factory in Russia.

History
For Soviet firearm enthusiasts, Izhmash is a revered name with its legendary factory logo, the upward pointing arrow, found on a host of Russian arms throughout the nation’s storied history. The Izhmash Arms Factory, located in Izhevsk, the capital of the Udmurt Republic, has the honor of being the largest firearms producer in Russia, dating back to its founding in 1807 by the express order of Tsar Alexander I. Tied intimately to the martial history of the Russian nation, the Izhmash plant produced more than 10 million carbines and rifles during World War II, and has been involved since the end of that war with the production of the AK-47 and its variants. To say that Izhmash knows the ins and outs of Kalashnikov production would be a gross understatement.

Taking the extremely high-quality of the Izhmash products to the next level is the factory’s custom shop, Legion Ltd., Arsenal Inc.’s partner on the SGL20 project. Legion Ltd. has its own production line where it manufactures high-end variants of the factory’s standard production guns, utilizing hand-selected components and employing detailed attention to fit and finish.
So how did a custom shop of a renowned Russian arsenal get involved with a Las Vegas-based Kalashnikov manufacturer? “We pride ourselves as being a manufacturer of the highest quality products,” says Harry Pakhanyan of Arsenal Inc. “This partnership between Arsenal Inc. and Legion Ltd. is the result of mutual goals and shared visions.”

Pakhanyan explained that although Legion Ltd. had a strong presence in the European and Russian markets, they had not managed to gain a foothold in the US market. At the same time, Arsenal Inc. was looking to offer consumers a true Russian Kalashnikov in an original military-pattern configuration. Recognizing their shared interests, the project ultimately resulted in the SGL20.

Known as a Saiga, the Legion Ltd. rifle imported into this country is manufactured in what has known as a “sporting configuration,” the trigger and trigger mechanism moved back to the rear of the receiver and the vertical pistol grip removed. In the place of it is a conventional-style curved pistol grip stock at the rear of the receiver. In addition, the Saiga’s magazine well cannot accept double-stack, high-capacity magazine, and the forend system is redesigned.

To legally reconfigure these Saiga rifles into an original-pattern Kalashnikov, it is required that a prescribed number of parts in the rifle be manufactured here in the United States. However, due to the extensive modifications required in making the Saigas legally importable, reconfiguring them into an original pattern is a little more involved than simply swapping out a few parts. In addition to the US-manufactured pieces, the magazine wells of the rifles must be cut open to accept high-capacity magazines and the triggerguard and trigger mechanism must be moved forward to accommodate the original-style pistol grip.

To make such extensive changes, Legion Ltd. wanted a company with the knowledge, skill set and background to properly do this work. “They were looking for a company that would maintain their renowned level of quality. We were looking for a high-quality product that would serve as a platform for our project,” Pakhanyan explains. He pointed out that Legion Ltd. was happy to learn that Arsenal Inc. had the proper tooling and quality control required to work on their rifles. According to Pakhanyan, the partnership was easily formed. 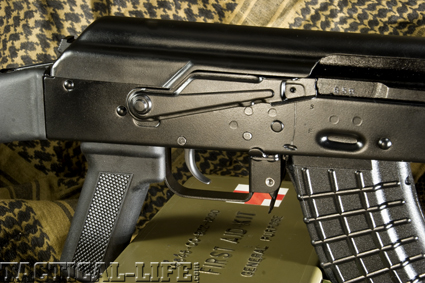 So what is it about the SGL20, whose moniker uniquely identifies the rifle as a high-end Saiga from Legion Ltd. and indicates it is the company’s second offering of this sort (it offered an SGL10 in 2008) that is so special? Offering an original-style Kalashnikov built on a true Russian rifle, Arsenal Inc. and Legion Ltd. have added a unique product to the realm of standard-production Kalashnikov rifles on the US market.

Its overall appearance and general configuration, the SGL20 is quite similar to the 7.62x39mm AK-103 rifle, part of the line of AK-100 rifles developed by Izhmash in the early 1990s for export. The entire series ranged in chamberings from 5.45x39mm to 5.56x45mm to the traditional 7.62x39mm.

The AK-100 series featured all the modern upgrades and tweaks developed in the Kalashnikov over its many decades of existence. This is why, despite its traditional 7.62x39mm chambering, the AK-103 featured ultra-modern AK-74-style features such as a grooved buttstock and large muzzle brake. The only prominent difference between the SGL20 and AK-103 (apart from the semi-automatic operation of the former) is the fact that the SGL20 does not feature the AK-103’s side-folding, full-profile buttstock.

However, it is more than simply the overall look and configuration of the SGL20 that makes it so appealing to Kalashnikov enthusiasts. Sure to enliven purists, the SGL20’s stamped steel receiver sports the renowned Izhmash upward-pointing arrow logo and minimal commercial markings. In addition, the receiver also has the proper dimples above the opening of the magazine well and the correct “X” and “Y” shaped reinforcement stampings for the trigger and hammer pins. Further enhancing its authenticity, the SGL20’s receiver has correctly positioned notches for the safety lever. Inside the receiver, the SGL20 sports a correct bullet guide for a double-stack magazine.

Arsenal, in addition to its extensive modifications regarding the placement of the triggerguard and widening the magazine well, adds several of its own high-quality parts to the rifle to bring it into compliance with US law. These include the polymer stock set, the fire control group and the one-piece-design muzzle brake. To mount the AK-74-style muzzle brake, the SGL20 features an AK-74-pattern front sight block with 24×1.5mm right-hand threads and forward-positioned bayonet lug to account for the brake.

Further characteristics of the SGL20 include a 90-degree gas block with proper vent holes, incorporated into latter-era Kalashnikovs to help prevent bullet shearing, and a metal AK-74-style ribbed buttplate. A 1,000-meter rear sight unit and optic mounting rail on the left side of the receiver rounds out the package. The rifle is supplied with a 30-round ribbed polymer magazine. 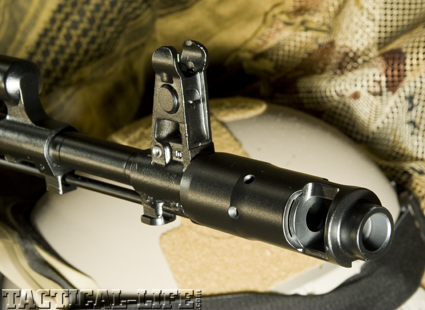 Featuring the upgrades of the AK-74M series of rifles, the SGL20 sports an Arsenal Inc. manufactured muzzle brake and a 90-degree gas block. Also note the bayonet lug at the bottom of the front sight base.

The fit and finish of the SGL20 I received for testing was excellent with no obvious machining marks on any parts, clean markings and an attractive powder-coated black finish on all steel parts. The black polymer stock set is attractive with a matte surface and clean molding lines. Arsenal Inc. also clearly pays attention to the even the smallest of details with the raised portion of the stock featuring the correct small gap between it and the rear of the receiver to allow for recoil forces and prevent undue wear on it.

Although the SGL20 may be a very sophisticated Kalashnikov variant, it still is ultimately a very simple rifle, which is much of the ubiquitous design’s appeal. Operationally, the SGL20 (like all Kalashnikovs) is a gas-operated, rotating bolt rifle. When a cartridge is fired, gas is bled off the barrel through a port in the gas block. This gas pushes back a large, heavy piston attached to the bolt carrier of the rifle. This rearward movement causes the bolt head to rotate and unlock from the barrel trunnion located inside the stamped steel receiver.

Complementing the simple mechanism of the SGL20 is the simple operation of the rifle. To load it, one simply rocks in a loaded magazine from front to back until it locks in place. After sweeping down the large safety lever of the SGL20, the action can be charged by pulling back on the reciprocating charging handle of the bolt carrier exposed through the ejection port and releasing it. The rifle does not feature a bolt hold-open device. Magazines are released by pushing forward on the magazine release paddle located forward of the triggerguard and rocking the magazine forward.

Range Time
For testing, I took the SGL20 out with a selection of Federal, Remington and Winchester ammunition. Over the course of a few hundred rounds, I did not experience a single malfunction. Accuracy of the rifle proved to be quite good, particularly considering I was firing it at 100 yards with iron sights.

Brass was vigorously ejected with a prominent dent showing from where it impacted the rifle during ejection. Perceived recoil, due in no small part to the highly effective muzzle brake, was pleasant and much lighter than a comparable Romanian Kalashnikov I have with the standard slat brake.

For American shooters who have always wanted to own a Kalashnikov that bears both the charms of the lineage and the high quality of Russian manufacturing, the AK-103-style SGL20 from Arsenal Inc. and Legion Ltd. is an irresistible opportunity.