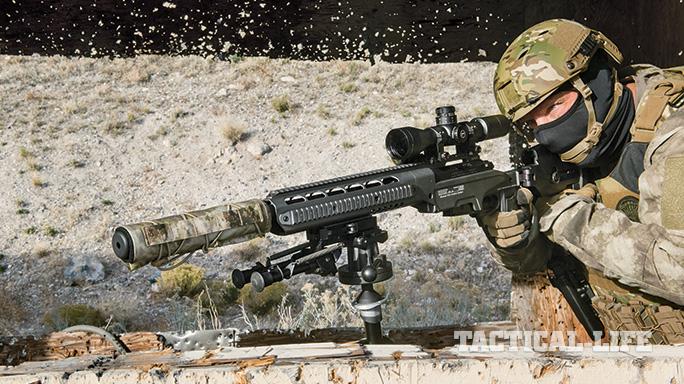 In a press release, Ashbury says the Saber M700 Major E.J. Land Signature Edition Tactical Rifle is built on an accurized Remington Model 700 bolt action receiver. Each receiver is mated to and fitted with a tuned Rifle Basix trigger set to a crisp three pounds. The receivers are then individually hand-fit to a 22-inch, match grade, 416R stainless steel barrel from Proof Research with a medium Palma contour chambered in 6.5 Creedmoor. In addition, the muzzle is suppressor-ready, finished with a target crown, threaded to 5/8-24TPI and fitted with a protective thread cap.

Meanwhile, the Saber M700 accurized barreled action is fitted with a 20 MOA scope base rail. It’s mounted into the Saber RSA-A3 Alloy Series MOD-0 chassis via the Magpul M-LOK attachment system. The included Quattro V17 forend includes rail attachment points at 3, 6, 9 and 12 o’clock. The 6 o’clock position has a bipod stud.

The Major Weighs In

“I’ve spent seven decades involved with firearms,” said Major Land. “From hunting, and marksmanship training, to shooting rifles as a competitor and instructor, to being a sniper in combat. I follow a few simple rules that have not changed over my career. Keep it simple, stick to the basics, and use technology to only supplement the basics. These rules have served me well and I feel we’ve incorporated this spirit in these NRA tactical rifles which bear my name.”

“We are humbled to be selected by the NRA and approved by Major Land to undertake this custom tactical rifle project,” said Matthew Peterson, Ashbury’s Product Development Manager. “It’s an honor and a privilege for Ashbury, and especially our contingent of USMC and Army Veterans, to work under the tutelage of Major Land on this project for the NRA. It’s a rare opportunity to work with such a great American patriot, historic Marine Sniper, firearms instructor and defender of America’s Second Amendment rights.”

Ashbury says the rifle was inspired by Major Land’s leadership and formation of the USMC Scout Sniper program. He conducted the first course since WWII in Hawaii in 1961. He then took the program into combat operations in Vietnam in 1965. While there, he trained, lead and fought alongside other snipers.

“Major Land wanted this rifle to be based on the battle-proven, American-made Remington Model 700 bolt action receiver which has a long and storied history in the Marine Corps,” continued Peterson. “It was important that his tactical rifle be a modern modular design, based on solid, reliable, American made components and be capable of sub 1 MOA or better accuracy chambered for the efficient 6.5 Creedmoor cartridge.”

The custom Saber M700 Major E.J. Land Signature Edition Tactical Rifle is available exclusively through the Friends of NRA National Sponsor Program. To acquire one of these rifles, contact your local Friends of NRA rep.