Austria’s Jagdkommandos function as the country’s special-operations unit. Their designation translates to “hunter commandos,” and they trace their lineage to the World War I Austrian Jagdkommandos and Storm Troopers trained to infiltrate or cross no-man’s land for reconnaissance and raids. The current Jagdkommandos were formed in 1962 by a group of Austrian officers who had attended the U.S. Army Ranger School. Their training and missions were initially similar to those carried out by the U.S. Rangers, but the Jagdkommandos have since evolved with broader special-operations capabilities. However, their training and selection still show U.S. Ranger influence.
Jagdkommando missions include special reconnaissance, hostage rescue, arrest of war criminals, snatch of high-value personnel, VIP protection (though the Austrian Military Police have taken over much of this function), counterterrorist operations, evacuation of Austrian citizens from dangerous areas, raids on high-value targets, and other typical special-ops missions. 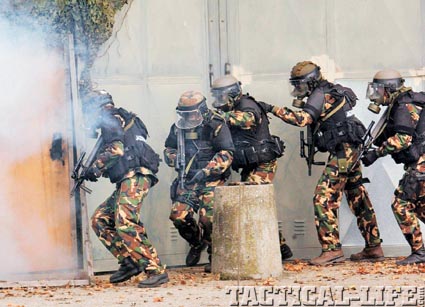 Steyr-AUG-armed Jagdkommandos in a stack as they carry out an entry.

Selection & Training
Candidates for the Jagdkommandos must have completed basic military training, have undergone psychological and physical testing and passed a security check. The physical test to qualify for Jagdkommando selection and training includes a 5,000-meter run under 24 minutes, a 30-meter rope-climb up a slope, a 300-meter swim, a jump from a 10-meter tower into water, completion of the standard Austrian Armed Forces obstacle course under 4.5 minutes, and a 15-mile march with a 22-pound backpack under 3.5 hours. Those who qualify and pass initial selection can begin the 26-week Jagdkommando basic course. But before that a 48-hour endurance and navigation exercise similar to that used by the SAS and other units must first be successfully completed.

Approximately one in five candidates makes it through. At least one female candidate has passed Jagdkommando training and selection, and is a reported dog handler for the unit. She is also valuable for deception operations during hostage rescues or intelligence operations. Various “sickeners” are used in selection, including team challenges requiring transport of a log over an obstacle course, long forced marches and physical tests that incorporate mental tests of fatigued candidates. 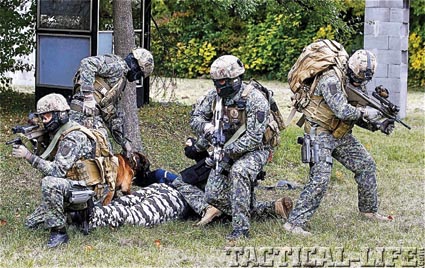 Jagdkommandos armed with Steyr AUGs and Glock pistols take up security positions during an injured-operator drill.