0
SHARES
22
VIEWS
Share on FacebookShare on Twitter
In celebration of the Colt Model 1911 U.S. Service Pistol’s 100th Anniversary, Auto-Ordnance has produced this special M1911A1—a duplicate of the pistol used during and after WWII, complete with special commemorative engraving on the slide.

You are probably already aware that 2011 marks the 100th Anniversary of the 1911 pistol. It was originally produced by Colt’s Patent Firearms and was designed by firearms inventor John M. Browning, whose genius had resulted in such creations as the Model 1886 and Model 1892 Winchester rifles. In 1896 Colt had seen the “writing on the wall” and contracted with Browning to develop an automatic pistol. Three years later in 1899, the first Browning-designed self-loader was introduced, chambering a .38 caliber cartridge and using a short-recoil, locked-breech mechanism. Colt, like every other arms manufacturer was looking for a lucrative military contract and the U.S. Military was not interested in another .38 caliber handgun.

History
American Armed Forces had adopted a Colt double-action (DA) revolver in 1892 chambered for the .38 Long Colt. The round had proved to be a dismal failure during our war with Spain in 1898 and the Philippine Insurrection that followed. Some of the Filipinos went straight from battling the Spanish to fighting the United States. This included the fierce Moro Tribesmen of Mindanao, who often soaked up several hits from the .38 LC and continued on to kill or maim the soldier using it. 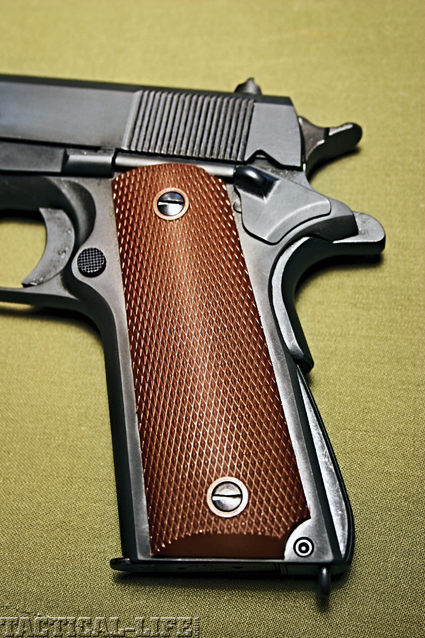 Following its service in WWI, the Model 1911 was re-evaluated by the Ordnance Department and improvements were made to the pistol — including better sights, a shorter
trigger and a curved mainspring housing. This new version was then designated the Model 1911-A1.

As the army had begun re-issuing the old Single-Action Army (SAA) revolvers in .45 Colt and also purchased some Colt Model 1902 DA revolvers in .45 caliber, Colt again chose to be proactive and in 1903 began to conceptualize a cartridge that would later become the renowned .45 ACP. The very next year in 1904 the military commissioned the Thompson-LaGarde Tests to determine the proper caliber for a new service handgun. Col. John Thompson and Major LaGarde used live cattle and human cadavers to determine that the new military cartridge should have a bullet no smaller than .45 caliber. By happenstance, 1904 was also the birth year of the .45 ACP (Automatic Colt Pistol) cartridge. 1905 saw the first .45 autoloader produced, but they didn’t begin to roll out of the Colt factory until 1906. The military eyed this new offering, but decided a year later that none of the pistols in production at that time met their demands. This set into motion a series of changes and upgrades to the Model 1905 Colt that included altering the angle of the grip, adding a grip safety, push-button magazine release, and a frame modification.