Since 1941, the M1 carbine has been manufactured in various forms to the tune of 6 million units. It was used throughout World War II, the Korean War, Vietnam and produced by several commercial makers in the past three decades. 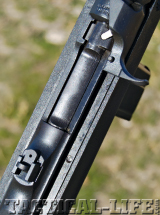 The carbine’s greatest attributes have always been its compact dimensions and lightweight, its greatest weakness has always been the original 110-grain FMJ .30 carbine government-issued round. Those in support assignments found the carbine infinitely easier to manage in daily non-combat roles than a Garand, and it was carried to a lesser extent by officers and some combat troops who employed it for certain uses.

But, it was often cussed for its relatively low stopping power when it actually did have to engage, particularly in Korea. The gun was willing but the ammo was weak. Today, ammunition choices are much wider and more effective. And, you don’t have to chase down a questionable beat-to-hell war relic to find a perfectly usable M1 carbine for duty use.

About The Gun
Auto-Ordnance Corporation offers three versions of the M1 Carbine, all brand-new and built in-house, no surplus parts here. They include a standard military configuration with walnut stock, a paratrooper model with folding wire stock and a tactical model with synthetic furniture and modern folding stock.

The carbine’s operating rod hook on the right side and rides high enough to allow the carbine to be operated with stock folded, if necessary. The carbine’s fitted with three sling swivels, up front on the left side of the barrel band, on top of the steel stock hinge joint housing, and at the bottom of the pistolgrip.

On The Range
For many years after the M1 left government inventories, carbine buyers were able to plink all day long for pennies burning up cheap stocks of ball ammunition. Most of that’s long gone, but today there are several ammunition makers with FMJ practice rounds, and soft and hollow points that are more effective in terminal performance for duty applications.

Winchester’s generic USA white box 110-grain FMJ and Remington’s 110-grain jacketed soft point rounds are representative of the current traditional commercial loads, and CorBon has jumped aboard with their advanced 100-grain solid copper DPX hollow points. With the right bullet construction, the .30 carbine can be a relatively potent caliber easily out to 100 yards, covering most law enforcement rifle confrontations.

At 100 yards using the lower rear aperture, elevation averaged 3 to 4 inches low on the short aperture with standard loads, about 2 inches low with the DPX. The bolt closed on an empty chamber once each with the Remington and CorBon rounds, and the CorBon DPX would not feed reliably with the AO magazine. Feed lips are slightly different between it and a GI magazine, the DPX will feed from a surplus magazine. Use magazines that function perfectly with your chosen load.

The Perspective
The M1 has always been a highly portable and easily maneuverable proposition. With modern ammunition, it handles close combat chores with a minimum of fuss and bother. Nearly anybody can tolerate the recoil, the carbine can be operated well by physiques ranging from munchkins to mammoths, muzzle blast is low, spare ammunition is also light to carry, and surplus magazines in new condition are available all over the Internet.

The Auto Ordnance carbine uses the latter magazine catch designed for the 30-round full-auto M1 magazines, but many carbine owners find the 15-rounders are more reliable. Most will not lock the action open on the last shot, incidentally. It’s normal, not a defect in the gun, and the bolt can be locked open manually. Auto-Ordnance sells 30-, 15-, and 10-round magazines for the .30 carbine separately.

The Choate folder is one of the best. The pistol grip allows a more natural straight-wristed one-hand hold on the gun with stock tucked under the armpit through areas where the off hand is used for doorknobs and so on. Much less fatiguing with a pistol grip than angling the wrist on a conventional stock. The only real downside of the pistol grip is that you have to break the stronghand firing hold to reach the magazine latch button. A few moderately sharp edges on the grip itself are easy to round off with sandpaper or a fine file.