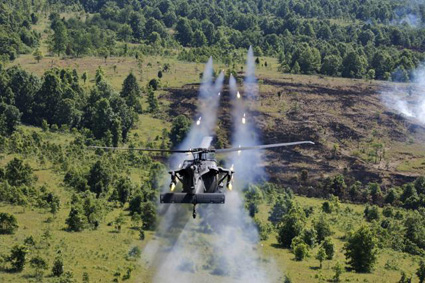 FORT RUCKER, Ala. — In compliance with the Base Realignment and Closure Act of 2005, Soldiers from the U.S. Army Aviation Technical Test Center deactivated the unit and cased their colors Friday at Cairns Army Airfield here.

According to Staff Action Control Specialist Deborah Burke, ATTC Soldiers and staff will combine with the U.S. Army Aviation Redstone Technical Test Center at Redstone Arsenal, Ala., Aug. 20. Col. Steven Kirhara will assume command of the new unit during an activation ceremony.

Burke said the nearly 350 former ATTC members at Cairns Army Airfield will be required to migrate to Redstone within the next two years. ATTC has been at Fort Rucker since July 1956, though not always by that name. Since its formation, ATTC has supported the military by testing “airworthiness and safety qualification of aircraft and related aviation equipment,” she added.

Outgoing commander Col. Christopher Sullivan relinquished his five-year ATTC leadership position at Friday’s ceremony and said he looks forward to his next position as senior acquisition adviser to U.S. forces in Kabul, Afghanistan. He said the best part of his work here has been interacting with the Aviation community and Fort Rucker Soldiers.

Sullivan recollected ATTC’s various accomplishments during his time here. He said aircraft including the AH-64 Longbow Apache, UH-60M Black Hawk and CH-47F Chinook were qualified for use by Army Aviators and are presently flying overseas to assist overseas contingency operations. He also said his unit exceeded Army safety goals while conducting 46 test missions in six locations daily. During Sullivan’s command, ATTC flew more than 21,500 developmental flight hours with no class A or B accidents.

“As today marks the beginning of an end of an era of flight testing being conducted here at Fort Rucker … it also marks the beginning of a new era, an era of flight testing and opportunity at Redstone Arsenal. Under that ensign, the great patriots seated about you and many more will continue to build on the legacy which this unit has forged and will continue their work which is so vital to our Soldiers and to our nation,” Sullivan said.

“The only constant in the Army is change,” Johnson said. “Change to adapt, change to improve, change to survive. This ceremony today celebrates change…While the Aviation Technical Test Center’s time is passing here at Fort Rucker, it will soon stand up as part of a new Redstone Technical Test Center at Redstone Arsenal, having adapted, having changed and having survived, ready to create a new history every bit as rich, as rewarding and as significant for today’s Army and nation.”

He explained the combination of ATTC and RTTC will lead to greater efficiency, and in turn, superb customer support.

Johnson presented Sullivan with the U.S. Army Combat Readiness/Safety Center Director of the Army Composite Risk Management award for making a significant contribution to Army readiness through the effective use of composite risk management. Sullivan was also awarded the Legion of Merit for superb leadership skills, technical competency and professional integrity.

FORT RUCKER, Ala. -- In compliance with the Base Realignment and Closure Act of…