by Keith Wood
in Uncategorized
0

Other than the violence of action associated with a military ambush or the disorienting blast of a flashbang, it’s hard to imagine a circumstance where “louder is better” in the tactical realm. As a result, we are seeing more widespread use of sound suppressors by both law enforcement and military end-users than ever before.

Suppressors not only significantly decrease the audible signature of a firearm, but they also virtually eliminate muzzle flash, reduce recoil and muzzle blast, and can even increase accuracy potential. The Tactical Rifles M40T7 chambered in .300 Whisper fitted with the AWC Thundertrap suppressor represents the extreme in noise and signature reduction. The combination of a precision-built rifle, a tremendously effective suppressor, and a cartridge designed for subsonic use gives tactical shooters the ability to make accurate hits at intermediate distances with minimal signature. 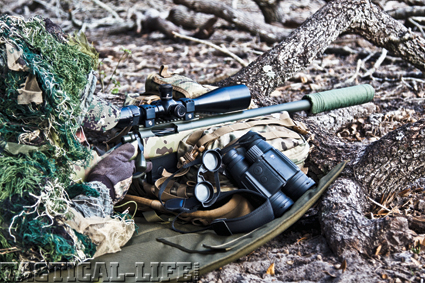 Tactical Rifles’ Multicam-coated M40T7 has a sloped forend designed for shooting from a bag.

Suppressor Details
Founded in 1983, AWC Systems Technology has been in the suppressor business longer than any of its competitors. AWC suppressors are 100 percent made in the U.S., with all raw materials sourced domestically. Though the company has been around for decades, they have continued to innovate their product lines by applying the lessons that they have learned along the way. The Thundertrap model is a perfect example of the company’s commitment to innovation. The Thundertrap has been part of AWC’s rifle suppressor line since the mid-1990s, yet they have made significant improvements over time. The current model is actually the fifth generation of the product.

The Thundertrap suppressor is constructed of 304 stainless steel and is appropriate for the range of cartridge diameters from .204 through .30 caliber. Like all AWC suppressors, the Thundertrap is coated with a poly-ceramic finish that actually hardens with each cycle of heating and cooling so the unit becomes more durable with use. The Thundertrap does not disassemble for maintenance because there is no need—the low-pressure design requires minimal cleaning (AWC recommends simply soaking in soapy water and rinsing). Because most centerfire rifle powders are burned in the first few inches of barrel, there is little to no unburnt powder to foul the internals of the suppressor. Additionally, propellant gases are dissipated quickly through the internal baffle system so that gases are not “trapped” in the suppressor along with accompanying debris. This same dissipation phenomenon is what makes AWC suppressors so quiet.

Though suppressors are commonly evaluated using a measure of decibel reduction, this only tells half of the story. It is both the amount and duration of sound that are perceived by the human ear, so, to effectively reduce the perceived noise of a gunshot, a suppressor must have an effect on both. AWC’s products are specifically engineered to reduce not only the actual sound in a lab but the way that the sound is perceived in the real world.

Let us not forget that a suppressor is an accessory that relies on a high-performance platform in order to do its work. Our test rifle, the Tactical Rifles M40T7, offered a solid, reliable, and accurate platform from which to test the Thundertrap’s effectiveness. At the heart of the M40T7 is the proprietary Chimera action, a dual opposing-lug bolt-action design that incorporates the precision tolerances of a bench-rest rifle with the reliability and durability that tactical shooters demand. The action features an oversized bolt handle, attractive and functional spiral fluting on the bolt body, and a beefy extractor. The action is pillar-bedded into the T7 stock of Tactical Rifles’ own design, a style that is well-suited to shooting prone or from a sandbag rest. The stock’s forend is sloped vertically to allow a shooter to make incremental elevation changes by sliding the rifle forward or to the rear on a rest. All metal work is coated in a corrosion-resistant “hostile environment” finish and the stock has been hydro-dipped in a Multicam pattern. Truly a custom rifle builder, the team at Tactical Rifles will create and build a firearm to a customer’s exact specifications.

With the muzzle’s thread protector removed, the AWC suppressor threaded onto the rifle’s barrel in seconds and was ready to shoot. Even with the suppressor attached, the entire package was compact and manageable. This rifle displayed no discernable shift in point of impact when the suppressor was mounted. Each rifle is different in this regard, but rifles with heavier, “stiffer” barrels and proper stock-to-metal contact are generally more forgiving. The M40T7’s heavy-profile barrel and pillar bedding most certainly contributed to the consistency displayed during our testing.

One of the issues that arises when attempting to suppress a rifle is that nearly all centerfire rifle cartridges with traditional bullet weights operate at supersonic velocities, creating a sonic “crack” no matter how effective the suppressor. To combat this issue, firearm guru J.D. Jones developed the .300 Whisper cartridge. The Whisper uses the diminutive .221 Fireball case necked-up to .308 and, when loaded for heavier-caliber bullets, the .300 Whisper maintains subsonic velocities with shorter barrels like the 16.5-inch unit on the M40T7. Hornady offers two loads chambered for the .300 Whisper cartridge: a 208-grain A-MAX subsonic load with an advertised 1,020 feet per second (fps) out of a 16-inch barrel and a more traditional load that pushes a 110-grain V-MAX at 2,375 fps.

Due to the efficiency of the Thundertrap, even the 110-grain supersonic load was pleasant to shoot without hearing protection, since the muzzle blast was so thoroughly abated. Even the audible sonic “crack” was projected downrange, safely away from the shooter’s ears. Firing the subsonic rounds was an altogether different experience. This rifle/suppressor/cartridge combination was, quite frankly, “scary quiet” and sounded nothing like a gunshot. With recoil eliminated by the rifle’s weight and the braking qualities of the suppressor, I was actually able to watch the fat .30-caliber rounds impact the target. The sound of the bullet hitting the backstop at 100 yards appeared to be louder than the rifle’s report.

The extreme noise reduction of the subsonic round comes at a price: trajectory. With a 100-yard zero, the 208-grain projectile drops nearly 3 feet at 200 yards, compared that to less than 4 inches of drop with a 175-grain MatchKing fired from a .308 Winchester. To address this pronounced arc, our M40T7 Whisper was coupled with a Zeiss Diavari 6-24x56mm riflescope that included an elevation turret calibrated specifically for the Hornady subsonic load. Using the elevation turret in conjunction with the Zeiss 10×56 Victory binocular/rangefinder, we were able to “dial for range” and make consistent hits at various distances out to 300 yards. The 110-grain load was far more forgiving where range estimation was concerned—it dropped only 6 inches at 200 yards with a 100-yard zero.

Accuracy was outstanding with both loads, with virtually no recoil or blast. The rifle was pleasurable to shoot. The rifle easily exceeded Tactical Rifles’ 0.5-inch, three-shot guarantee, with the smallest five-shot group measuring an astounding 0.13 inches using the 208-grain A-MAX load. Tactical Rifles uses hand-lapped, match-grade barrels for all of their rifles and their selection of quality materials and painstaking manufacturing techniques really makes a difference on-target. Not only was the rifle accurate, it was reliable; throughout the test, the short, fat cartridges fed flawlessly from the detachable magazine into the action’s precision chamber.

In today’s marketplace, there are many options available to the tactical shooter who is looking to decrease the audible signature of a firearm. However, an operator looking for the ability to make precision shots with the utmost in sound suppression would be hard-pressed to find a more effective combination than the Tactical Rifles M40T7 .300 Whisper fitted with an AWC Thundertrap. This setup meets and exceeds any reasonable expectation of quality and performance. 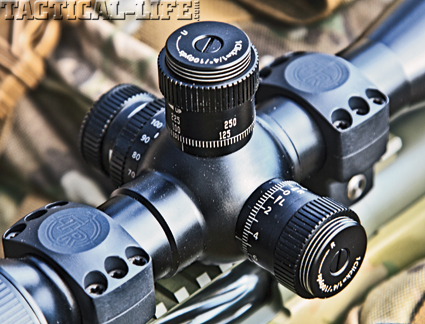 Due to the exaggerated trajectory of the .300 Whisper cartridge, a calibrated elevation turret like this Zeiss model is essential for making precision hits.