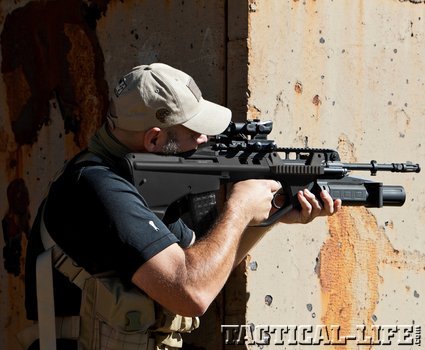 Military contractor Thales Australia officially unveiled the new F90 issue rifle for the Australian Defence Force (ADF). In addition to more accessory rails, the F90 is nearly a pound lighter than the F88S-A2 it is intended to replace (F89 is the designation of the ADF’s FN Minimi variant) and the large AUG triggerguard has been reshaped to serve as a vertical foregrip. Steyr-Mannlicher is rumored to be partnering with Thales to pursue possible replacement of the French FAMAS rifle as well.

The AUG (Armee Universal Gewehr or universal army rifle) started as a 5.56mm bullpup assault rifle designed in the early 1970s by Steyr that was later adopted by the Austrian Army as the StG 77 (Sturmgewehr 77) in 1977. In the late 1980s the ADF adopted a modified version, dubbed the F88 Austeyr, as a replacement for the then-issued L1A1 SLR and M16A1 rifles and manufactured under contract by Australian Defence Industries (now Thales Australia). 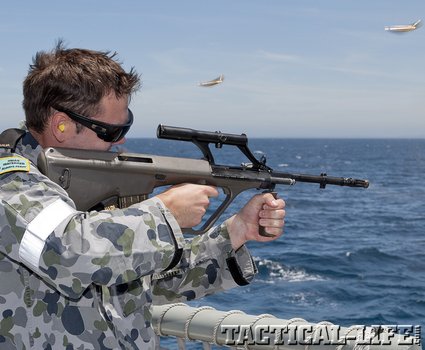 Designed in the 1970’s, Steyr’s AUG is still serving military, law enforcement and security forces in over 30 countries

Changes for the F88 Austeyr included a bayonet lug, 1:7 twist to stabilize 62-grain NATO SS109 ammunition and an automatic lockout selector that can disable the full-auto position of the two-stage trigger system, as used on the original AUG. This was upgraded to the F88S-A1, which added a Picatinny rail in place of the Steyr AUG standard 1.5X optical sight, that allows a variety of other optics, lasers and/or night sights. The F88S-A2 featured a modified gas system to increase reliability with other NATO-manufactured SS109 ammunition, specifically U.S.-made M855, an enlarged ejection port, longer rail on top and side rails for mounting lights. 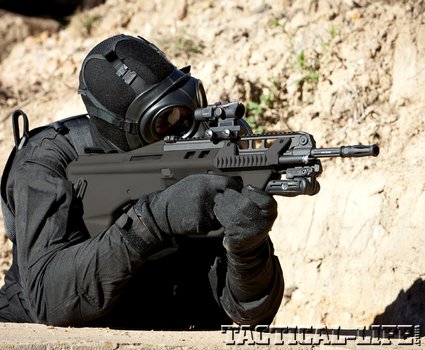 Thales’ next generation F90 rifle is available in five versions. The rifle wears a 16-inch barrel, 27.5-inch overall length and weighs 7.1 pounds. The F90M Marksman features a 20-inch barrel, 31.5-inch overall length and comes in at 7.5 pounds. Both of these versions have a 40mm grenade launcher variant as well. Finally, the ultra compact F90CQB Close Quarters Carbine features a 14.17-inch barrel and a trim 6.9-pound base weight.

The F90 is built on the F88S-A2 and added new features to improve ergo­nomics. A bolt release button has been added as well as a three-stage safety. The original AUG had a simple cross-bolt safety and two-stage trigger design that operated both semi- and full-automatic fire. Pulling and releasing the first stage fired individual shots, while pulling the trigger all the way through the second stage gave fully automatic fire. The F90 safety adds a single-shot semi-auto only setting and another setting which transitions from single-shot to full-auto through the trigger pull, as per the original AUG design. Thales is also offering an option of adding a three-round burst selector on the stock if requested.

Increased modularity is ever popular, allowing troops to set up their weapons based on mission needs. The F90 has a longer top rail, with additional side and bottom rails to allow more room for weapon attachments. From a battlefield operator’s shooting perspective, the Thales F90 rifles’ overall lengths make them highly manageable, as body armor has become the norm. The barrel is floated and no longer has any external attachment point. Fluting cuts weight. For grenadiers, the mount has been relocated to improve balance and the launcher is side opening, allowing it to chamber all currently available 40mm low-velocity grenades. The previous launcher mount on the F88 was a bit of an afterthought. The F90 was recontoured with the GL in mind. It slides on and off with ease.

The ADF designates several tiers based on mission. Tier One encompasses special operations, Tier Two are infantry and other combat elements, and Tier Three are non-front line support troops. As the Picatinny rail allows more options than Steyr’s original 1.5X circular reticle optic, Tier One and Two will have a variety of sighting options. Tier Three troops will normally be issued the standard low magnification sight. 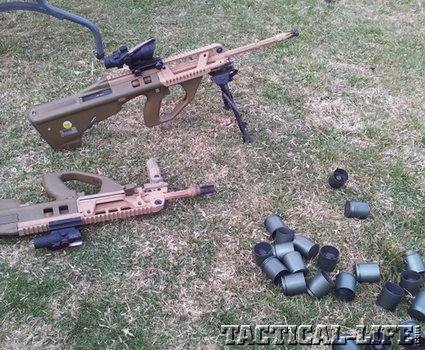 Production Thales F90s have an open-prong flash hider designed to take a sound suppressor. For field training exercises, Thales redesigned the blank firing attachment, which has a mechanism to trap the bullet and safely release gas pressure should a live round be accidentally inserted and fired during operations.

Kord Defence Pty Ltd, another Australian firm, designs and develops a variety of embedded input devices that are being considered for future small arms developments. Dubbed the SmartGrip Rifle Input Control, it is a Picatinny mounted device allowing easy control of electronic devices attached to the rifle or carried by the user. Dubbed Rifle Input Control, the RIC has five buttons located on the handguard. The operator punches in “chords,” or combination button pushes, to control ancillary devices with 31 possible input selections. Called the Chordic Graphical User Interface, it was originally developed at the Australian Institute of Marine Science and was being used to control the Royal Australian Navy’s Mine Warfare Underwater Combat Systems prior to use as the RIC.

Testing on this system was conducted at the University of Canberra, where the RIC was compared to touchscreen and UDS (Up Down Select) interfaces. The RIC allowed the best eyes-off operation with accuracy at speed. 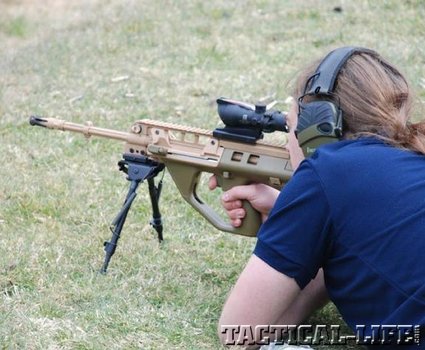 The RIC is a fully integrated electronic architecture, allowing centralized control and power management of all attached accessory devices. The F90’s handguard and stock were originally created around this system, protecting it while allowing access to fit, maintain and repair electronic components. The RIC contains a small programmable microprocessor with no moving parts and minimal power requirements (the battery has a three-year operational life) and can be set to control a host of on-weapon accessories, such as thermal weapon sights, infra-red sensors, night aiming devices, laser range finders, etc. Other non-weapon electronic devices that can be operated wirelessly, such as radios, GPS systems and computers, can also be interfaced with the RIC.

The weapon systems detailed here are leading the future of the Austeyr towards their Advanced Infantry Combat Weapon. In current development with the Defence Science and Technology Organisation, Metal Storm and Tenix Defence, the AICW goal is to create a microprocessor-controlled multi-shot GL similar in power to current 40mm rounds, while allowing an instant switch to 5.56mm ammo without having to change sights, trigger or shooting position. This is a similar capability to the U.S. Army’s Objective Individual Combat Weapon program. The F90 is a leading attempt to making this a reality. For more on Steyr, visit steyrarms.com or call 205-655-8299. For Thales, visit thalesgroup.com or call +61 (0) 2 9562 3333. 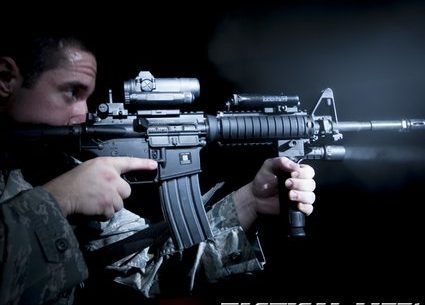 The F90 Austeyr is a nicely improved service rifle, combining a modular 5.56 mm…