by John Fasano
in Uncategorized
0

0
SHARES
7
VIEWS
Share on FacebookShare on Twitter
Hollywood has a love/hate relationship with firearms. Movie people love what guns can do: look good on posters next to the star’s face, blow up cars with one well-placed shot, and clean up messy plot holes with big climactic shootout scenes. At the same time, with a few notable exceptions like John Milius, Michael Mann and the guys who make South Park, most of the people who make these action movies hate guns. Never shot one. Don’t want to. Wish they’d “all go away” so there wouldn’t be any more crime or killing.
We have to keep that conflict in mind when we go to the picture show to see the latest Hollywood shoot ’em up. While many on the cast and crew are gun people, the higher ups aren’t, and the kind of firearms mistakes movies get slammed for come from the top. In future issues we’ll look at some of these gun misfires and examine where they came from.

Two-Fisted Gunmen
I have to start out with one of the most annoying trends in current motion pictures of the last two decades: Our heroes firing two guns simultaneously. Ever since 1987’s Lethal Weapon gave us a young Mel Gibson firing his brace of Beretta M-92 L.A.P.D. issue 9mms—one in each hand—without looking at the sights on either gun, the “one autopistol in each hand” has become the beloved shooting technique of the silver-screen hero.

Keanu Reeves’ Neo stormed the agent’s stronghold in the first of three post-apocalyptic Matrix movies with a Beretta in each hand, graduating to twin H&K MP-5s as the action progressed. Everyone in the films enters battle with a pistol or submachine gun in each hand—even Laurence Fishburne’s Morpheus takes on the computer-generated villains with twin Glock 18 full-auto pistols.

Nicolas Cage and John Travolta switched bodies and took turns shooting two gold-plated 1911s in John Woo’s Face Off, with Cage using dual full-auto Berettas in the film’s climax. Will Smith faced the movie villains in both Bad Boys movies with custom two-tone Glocks in his hands. And Asian movie star Chow Yun Fat’s turn in Bulletproof Monk had him shooting the guns out of the evil modern-day Nazi’s hands with a pair of Desert Eagles.

Let’s not forget our screen heroines! Leather-clad Kate Beckinsale and her werewolf-killing tactical squads in both Underworld movies run, leap off buildings and shoot with an HK USP in each hand. Angelina Jolie in two Tomb Raider films never pulled the trigger on her modified USPs unless there was one in each hand. In Tomb Raider and its sequel, at least someone on the crew figured out that, logically, she should have leg-mounted magazine pouches that allowed each empty gun to be reloaded by thrusting them against her thighs! 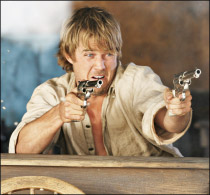 How did this two-gun madness start? We have to think back to our childhood memories, and the “action films” of the first 50 years of moviemaking: The Western. Movie and TV cowboy heroes often carried two guns—heck, the Lone Ranger wore two guns, and sometimes fired with one in each hand. I can understand that. It takes time to load those single-actions and if you’re in a gunfight with a gang of bad guys, it’s quicker to go to a second gun than reload. However, that was over 100 years ago!

But movies aren’t supposed to be real. The filmmakers even know that this two-gun madness is becoming a cliché, but they can’t resist it. In the British police comedy Hot Fuzz, Shaun of the Dead’s Simon Pegg is asked by his new partner if he’s ever shot two guns at the same time—jumping through the air. Pegg laughs that off as ridiculous, but by the end of the film he’s jumping in slow motion, firing two guns simultaneously!

Putting Hollywood Technique to the Test
Okay. So would the two-gun technique be effective at all? How could I even test that?
I stopped short of bringing gym mats to the range. Jumping with two loaded guns in my hands doesn’t sound like a good idea. I can’t think of a time when I’ve had to leap through the air with one gun firing. That’s far less effective than shooting from cover. As big-game hunter George Neary would say, “I’m skeet” would be running through my mind as I sailed through the air.

And most of all: I wouldn’t be able to see my sights. Look how these Hollywood action stars are holding these guns—at arm’s length—pointed in two different directions, the star smiling for the camera. Uh, what is he aiming at? Right. Aiming. Shooters know that aiming is a big part of hitting.

Of course, this wasn’t a problem for Johnny Depp in Once Upon a Time in Mexico; he shot with a gun in each hand after the bad guys cut out his eyes!

Retiring to a private range at the Angeles Forest shooting facility here in Southern California with actor Michael Rooker from Tombstone and Slither, a student of fast-draw legend Thell Reed, we tried to walk through shooting our guns without looking at the sights at all. Okay, we cheated, catching flash sight pictures in order to hit man-sized silhouettes. Emulating our silver screen action stars without cheating resulted in zero kill-zone hits.

The lesson? Shooting two guns without being able to see the sights on either is a good way to shoot up the room, but not put down the bad guy.

As serious shooters, these theatrics do more than rankle us, they teach a whole new generation of bad habits.
If you’ve got a particular favorite Hollywood gun foul-up, email us at comments@harris-pub.com and we’ll take a look at it in a future column.

About The Author:
John Fasano has toiled under the Hollywood system producing, writing and directing such films and TV movies as Another 48 Hours, Tombstone, Stone Cold and Saving Jessica Lynch.