0
SHARES
4
VIEWS
Share on FacebookShare on Twitter
A good view of the barrel’s muzzle of the Mk 38 Mod 2 MGS. Sailors inspect the Mk 38 Mod 2 25mm machine gun mount aboard the USS Shoup. The Tactical Laser System (TLS) will supplement and extend the gun’s firepower.

An American warship, its sleek silhouette framed by the desert sunrise, rides hull-up near the horizon outside Port Sudan in the Red Sea. From sheltered wharves, several small boats are turning up engines and soon put out to sea. These are not fishermen leaving with the dawn. These boatmen carry far more lethal cargo than nets, and they intend to catch a destroyer, not the local grouper known as hamoor. Their tactics are simple enough. The boats will approach the warship at high speed from several directions. The destroyer’s 25mm gun may be able to hit some of them, but they are all willing to sacrifice their lives to attack the vessel with man-portable missiles that can penetrate the hull, damage structures and systems, and kill infidel sailors.

The boats race toward their target, fanning out beyond gun range to surround the destroyer. On a transmitted command, they will begin to converge on the solitary vessel, missiles at the ready. Suddenly, one of the boats swerves, heaves to and slows until it is dead in the water. The insurgents know they are beyond the effective range of the ship’s machine gun. There is no report from the warship, no stream of fire from tracer rounds. In seconds, another boat, its bow rearing like a wild horse, stops, followed by a third, their crews stranded, their weapons inert. The attack is falling apart. The remaining boat crews hesitate, then turn and flee toward port. They will abandon their craft and vanish into Sudan’s busy streets. Something has happened. The Americans must have a new weapon, leaving the insurgents powerless. 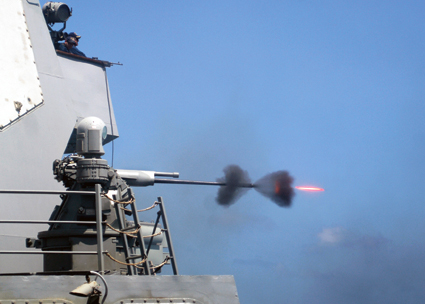 Fiction to Reality
This scenario may be reality in just a couple of years, thanks to the new Mk 38 Mod 2 Tactical Laser System (TLS) by BAE Systems in partnership with Boeing. “BAE is developing the Mk 38 Mod 2 TLS to help the Navy meet the ongoing challenge posed by swarms of small boats attacking from multiple positions and distances with a wider range of effects,” said John Perry, BAE Land & Armaments business development director. “The TLS uses a solid-state, high-energy, 10-kilowatt laser initially, with options for higher power, and will combine with the Mk 38 Mod 2 25mm stabilized machine gun system (MGS), which has over 150 gun mounts currently deployed and there are plans to deploy an additional 250 gun mounts for ship self-protection and defense on nearly every surface combatant.”