0
SHARES
140
VIEWS
Share on FacebookShare on Twitter
The 32-pound weight of the rifle and its well configured three-spring recoil system helps control the 60 foot-pounds of recoil the .416 Barrett generates. The felt recoil is more like a shove than a punch. (Far right) The wide and thick buttpad reduces felt recoil.

Barrett’s Model 82A1 in .416 Barrett is a beast — it measures 56 inches long and weighs 31 pounds. This is a semi-automatic rifle but it’s not a gas gun, meaning, it works off the short recoil principle. The rearward thrust generated by the cartridge when fired forces the bolt to the rear. In short, the Barrett 82A1 in .416 Barrett is a premier long range, non-crew served, weapon system that offers lots of firepower, lots of energy on target and an impressively flat trajectory. 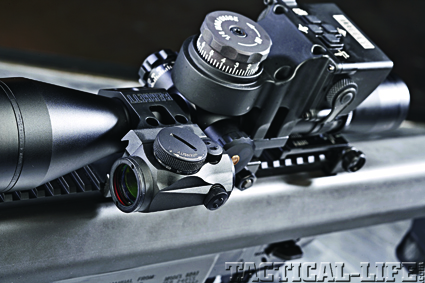 The BORS kit includes the Barrett Ballistic PC Software and a BORS data cable that allows the user to program custom loads on their personal computer and transfer them directly to their BORS.

The rifle comes in a hard pelican case with a detachable 10-round magazine. It is a two-part affair much like an AR with a serial numbered lower receiver fitted with an AR-style grip and two-position safety. Integral to the lower receiver is a quick release attachment for an adjustable, folding bipod that also comes with the rifle. The bipod is adjustable from 8 to 11 inches.

The barrel on the 82A1 is 29 inches long and has a 1-in-12-inch twist. The muzzle is threaded and comes with a brake that has three large ports on each side. The barrel can be removed from the upper and the bolt assembly can be removed from the lower for maintenance, replacement or cleaning. The first time I assembled the rifle it took me about 5 minutes. Subsequent field-stripping and reassembly took just over a minute.
Along the top of the upper receiver is an 18-inch Picatinny-style optics rail with 27 MOA of correction already built in. From the factory the rife comes with a quick release carry handle that mounts to this rail. You can position the carry handle anywhere along the rail you like, but ultimately it will need to be in front of whatever optics you mount.