0
SHARES
16
VIEWS
Share on FacebookShare on Twitter
M240 crews can lay down accurate fire out to 800 yards from the weapon’s bipod. Suppressive fire to 1,800 yards is possible with a pintel-mount tripod.

The family tree of American military high-capacity medium machine guns doesn’t have many branches. Starting with the Colt Browning M1895, the U.S. Navy ordered a few hundred, and didn’t get any more serious with the Hotchkiss-based Bennet-Mercie M1909, when the Army ordered 700 guns. The Lewis Gun’s numbers grew to about 15,000 during WW I, and John Moses Browning stepped up to the plate again and invented the M1917/M1919, which stayed in service through the Korean War. By 1957, the M60 was adopted. Thirty-five years later, when the M60s in service were a bit ragged out, the U.S. military started looking for a new weapon to put in service. 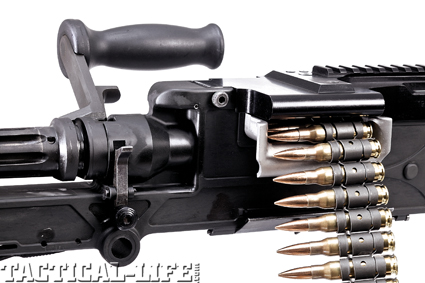 Night jumps with M240B are no fun, and humping one for miles has worn out a lot of gunners’ knees. Barrett’s ability to trim 6 pounds from a gun that started out at 27 pounds makes a big difference.

The M240B was designated as the new workhorse medium machine gun in the early 1990s, and remains in service today. This weapon has been in service less than two decades, but the design goes back quite a bit further. In the early 1950s, Ernest Vervier at Fabrique Nationale (FN) basically took a Browning 1917 BAR, turned it upside down and created the FN MAG 58.

The FN MAG, a Belgian 7.62mm general-purpose machine gun, has been used by more than 80 countries. Countries such as Argentina, Egypt, India, Singapore, the United Kingdom and the United States license its design. The weapon’s name is an abbreviation for Mitrailleuse d’Appui Général, meaning general-purpose machine gun. The MAG is available in three primary versions: the standard, infantry Model 60-20 machine gun, the Model 60-40 coaxial machine gun for armored fighting vehicles and the Model 60-30 aircraft variant. It’s the Model 60-20 version that has been licensed and manufactured as the M240B. The one thing that remains part of a gun that was designed more than 50 years ago (based upon a design that originated 40 years prior) is that many of the manufacturing ideas remain rooted in the past. 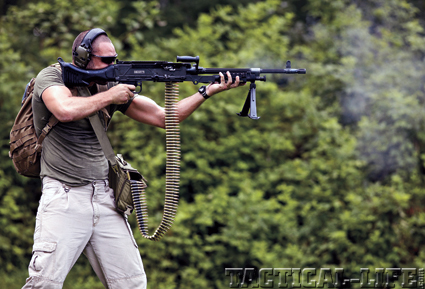 The M240LW tips the scales at a significantly reduced weight of 21 pounds, making it easier to move to the fight and fight on the move.