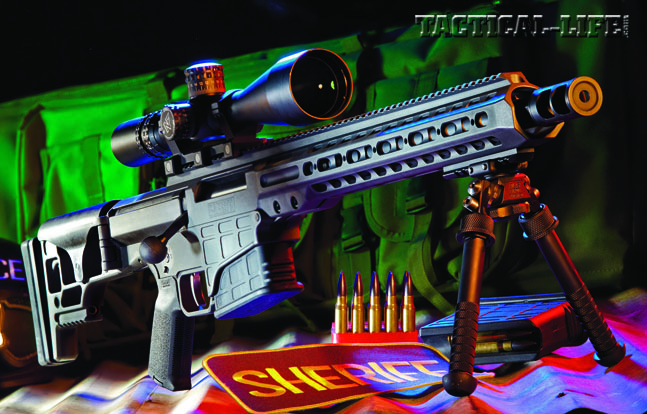 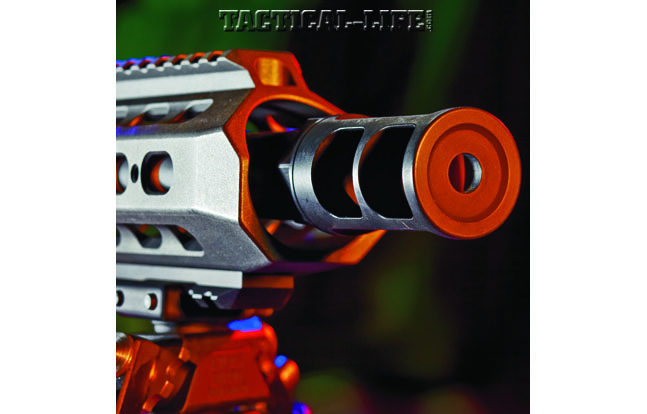 2 of 8
Barrett 2
Barrett designed the muzzle brake specifically for the .308. It reduces the majority of the recoil, allowing LEOs to get back on target quickly. 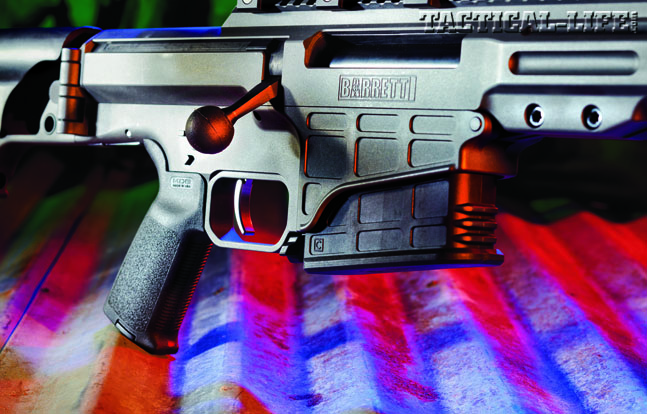 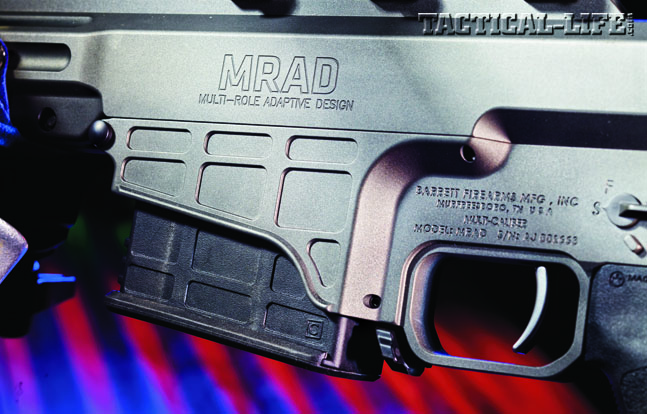 4 of 8
Barrett 4
The rifle uses 10-round, polymer magazines. A paddle magazine release is centered at the rear of the mag well for ambidextrous access. 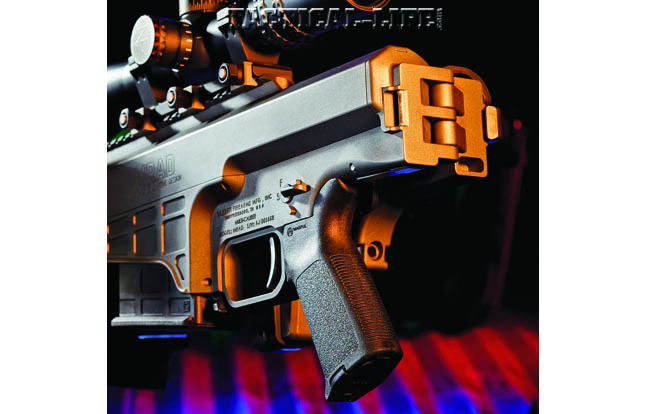 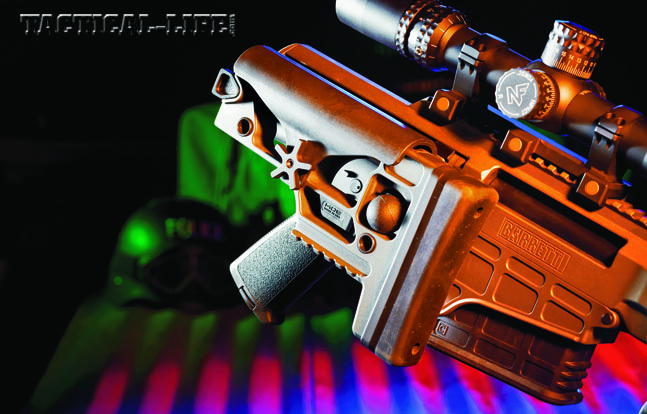 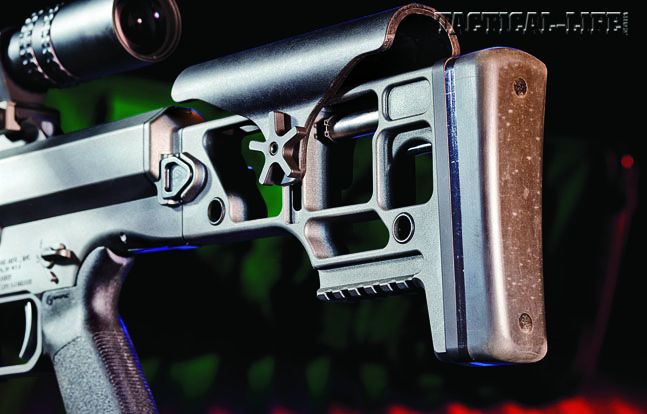 7 of 8
Barrett 7
The skeletonized, folding stock locks over the bolt handle to keep it secure and reduce the MRAD’s width. 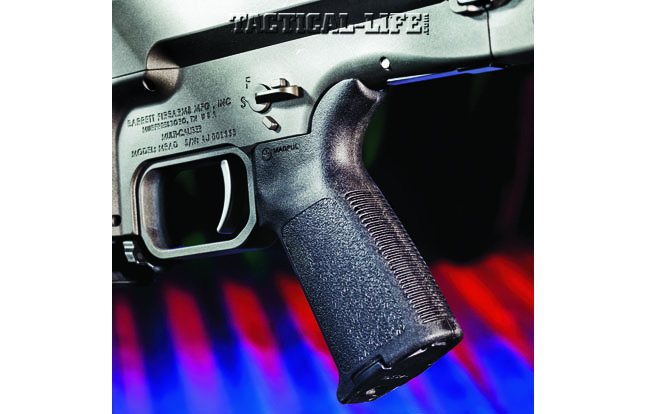 8 of 8
Barrett 8
Barrett outfits the MRAD with a Magpul MOE pistol grip, and users can remove the match-grade trigger module and adjust its pull weight. 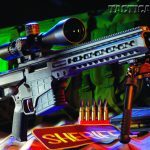 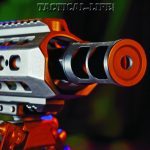 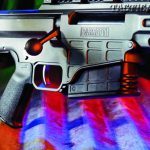 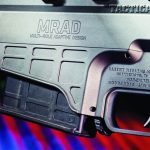 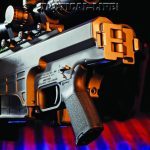 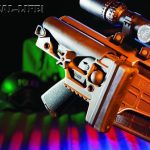 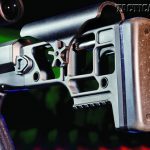 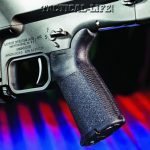 There are no better words to describe Ronnie Barrett’s 30-year journey than the tagline on Barrett Firearms’ website: “A never-ending mission.” The Barrett name is synonymous with his .50-caliber rifles. The semi-automatic M82 rifle has become legendary due to its simple and rugged design, and has seen service in almost every corner of the world. The success of the highly popular M82 lead to an entire line of large-bore rifles that includes the bolt-action M99 and M95 as well as the newer M107A1.

In 1999, U.S. Special Operations Command (USSOCOM) released a solicitation for a Precision Sniper Rifle, or PSR, designed to engage targets at 1,500 meters and beyond. In response to the solicitation, Barrett developed the Multi-Role Adaptive Design, or MRAD, precision rifle. The MRAD shares the ruggedly modular design of other Barrett rifles. Since its introduction, MRADs have been chambered in either .338 Lapua Magnum or .300 Winchester Magnum.

Last year, Barrett received a request from an overseas client to develop a more compact MRAD in 7.62x51mm/.308 Winchester. The client wanted to retain all of the modularity of the original MRAD while developing a rifle that was better suited for urban use. The result was the new MRAD in .308 Winchester, a rifle that I believe is extremely well suited to LE use.

The MRAD is a magazine-fed, bolt-action rifle with a chassis that consists of an upper and lower receiver. The upper receiver starts as an extruded block of 7000-series aluminum that is precisely machined to exacting tolerances in one of Barrett’s many CNC machines. An integral Picatinny accessory rail with a 20-MOA taper runs the length of the upper receiver and provides a solid platform for optics and other accessories. A series of elongated slots is machined into the rail to allow for improved cooling and reduced weight. The rail also features threaded attachment points along the 3, 6, and 9 o’clock axes that allow users to add rail units to mount additional accessories.

The MRAD’s lower receiver houses a drop-in match trigger housing module that can be fully adjusted by the end-user. The trigger module can be easily removed by drifting out the M4-style thumb safety. This allows easy access for cleaning and, if needed, replacement. The thumb safety can also be configured for either left- or right-hand operation and, when in the “fire” position, rests at a 45-degree angle. The MRAD uses a Magpul MOE pistol grip. A flared magazine well accepts Barrett’s polymer 10-round magazine, which is released via a paddle located at the rear of the magazine well.

To enhance its portability, the MRAD features a machined buttstock that folds to the right side of the receiver and locks into the bolt handle. The stock is skeletonized to reduce weight and to allow it to fold over the bolt handle. This design enables the rifle to have the same width whether the stock is folded or extended. The locking mechanism is a beefy design that provides the same rigid foundation as a fixed stock. A polymer cheekpiece, adjustable for height, helps the operator obtain a consistent cheekweld. The stock can be adjusted to five length-of-pull positions.

To disassemble the MRAD, the user depresses the release button located on the bottom of the lower receiver, just behind the pistol grip. The upper receiver is then pivoted upward, allowing the bolt housing group to be removed out the back of the upper receiver. The bolt group is similar to an M4 in that it consists of a carrier and a bolt. To remove the bolt from the bolt carrier, the striker tension is relieved, allowing the bolt-retaining pin to be removed. The bolt is then removed from the carrier much in the same manner as an M4 bolt. This modularity allows the operator to change calibers without having to replace the entire bolt housing group. The smooth bolt action is enhanced by the use of a polymer bolt guide that also acts as a dust cover when the bolt is closed.

Barrett receives match-grade barrel blanks and then machines them in-house to exacting standards. The MRAD barrel can be removed from the front of the upper receiver by loosening two bolts. A new barrel can be installed in minutes using only a Torx wrench. This simplicity allows the user to replace a barrel and/or change calibers in the field.

I was fortunate to receive the first production .308 Winchester MRAD to leave the factory. The .308 MRAD is built on the same chassis as the larger-caliber rifle, enabling it to be converted to .338 Lapua Magnum or .300 Winchester Magnum in just a few minutes. My test rifle featured a heavy-profile, 1-in-10-inch-twist, 17.5-inch barrel with a two-chamber muzzle brake. In speaking with a Barrett official, I learned that this length and profile proved to be the most accurate combination given the operating parameter requested by the client who requested the .308 MRAD. Barrett finishes the rifles in a very pleasing and functional “Sniper Grey.”

Nightforce Optics was the natural choice for the MRAD, and Barrett provided the MRAD with a Nightforce 3.5-15×50 F1 NXS scope. The scope features a 30mm tube, a 50mm objective and 0.25-MOA High-Speed turrets. The High-Speed turret design provides a full 20-MOA adjustment with one complete turn and has a zero-stop function. The reticle is located in the first focal plane, which has distinct advantages in high-stress situations and when the user might encounter targets from up close to 1,000 yards away. And, since it’s in the first focal plane, the reticle remains in the same visual proportion to the target across the scope’s entire magnification range. This feature allows accurate ranging at any magnification level.

The test scope featured the Velocity 1000 reticle, which provides a user-friendly solution for rapid, precise shots on target at ranges from 100 to 1,000 yards. Each reticle can be customized to the ballistic profile of a specific load. The load can be a standard factory load or a custom load that the customer has developed for their individual use. Nightforce offers an online program that will calculate the ballistics of each load. Using caliber, bullet type and weight, ballistic coefficient and velocity, Nightforce will build a custom reticle to match a specific load.

While I had previously handled an MRAD, this evaluation gave me the opportunity to get inside the rifle and the design. The takedown and disassembly is as simple as it’s described in the manual. Removing the trigger module was also very simple and allowed me to make a minor adjustment in the weight of the pull. Each adjustment screw has a locking nut to ensure the adjustments do not walk under use.

On the range, the MRAD attracted a great deal of attention. During informal testing, several shooters were able to hit targets out past 400 yards within 1 MOA using the Velocity 1000 reticle. As expected, the trigger broke crisply at 3.2 pounds with no creep. For formal testing, I used three proven premium loads. Barrett advised that the MRAD had been zeroed with Federal XM118 LR ammo with 175-grain OTM projectiles. I also selected ASYM Precision’s 175-grain MatchKing load. Since the weapon is designed for a tactical/law enforcement environment, I selected the Hornady 168-grain TAP and RUAG’s Swiss P Tactical 164-grain FNBT ammo.

While designed for the military special operations community, the Barrett MRAD is well suited for the law enforcement community. The MRAD’s aluminum chassis and rugged design is impervious to weather and harsh climate conditions that could play havoc with a synthetic-stocked rifle. Should the MRAD be exposed to the elements, it can be stripped and cleaned in a just a few minutes without needing any armorer’s tools. It is also significantly more rugged than traditional sniper platforms. The folding stock is a bonus for transporting the MRAD, and its adjustability makes it more flexible and easier to share between users.

Finally, the most important benefit of the MRAD is the ability to change calibers for different missions. While the .308 is more than adequate for most urban tactical engagements, the heavier .338 Lapua Magnum offers greater range, lethality and penetration. The .338 Lapua Magnum comes into its own on countersniper and long-range coverage missions.

The basic Barrett MRAD retails for approximately $6,000. While this is a significant investment, I tend to think of the MRAD as the last rifle you will ever have to buy! And, every MRAD, no matter the chambering, is test-fired at the Barrett factory with Lapua ammunition. Combining its qualities—sub-MOA accuracy, caliber interchangeability, ease of maintenance, and a durable, modular design—there is a lot to like about the .308-caliber MRAD. For more information, visit barrett.net or call 615-896-2938. 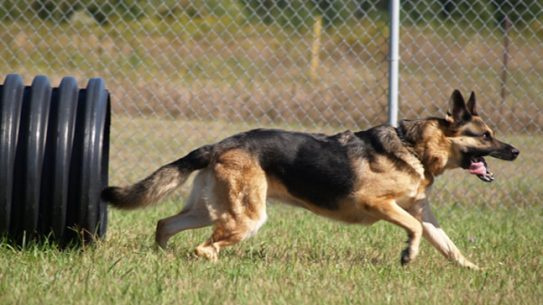 An Indiana veterinarian has been honored for his work with a local k-9 unit.