by Scott Wagner
in Guns, Rifles
0

0
SHARES
61
VIEWS
Share on FacebookShare on Twitter
The UBL-37 mounted on the Del-Ton Custom Mid-Length gives officers the option of a 37mm less-lethal or 5.56mm lethal response. It is shown equipped with a Leupold Mark 4 MRT riflescope.

M any cops tend to not be fans of hanging a lot of stuff off their ARs. Eugene Stoner brilliantly designed it as a 6.5-pound rifle for the express purpose of lightening (at the government’s behest) the combat load of the foot soldier. The most they might add to an AR is an optic, tactical light and vertical foregrip. Sometimes a laser sighting system, but that’s it. With this background in mind, you can see that it might take either a lot of convincing, or a really cool accessory for them to boost the weight of an AR they would carry. I have found that really cool accessory in the form of the new Bates & Dittus UBL-37 underbarrel 37mm ordnance launching system. 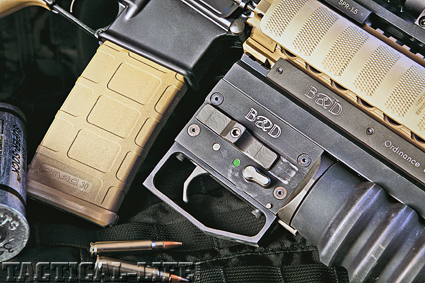 The manual safety, visible just above the trigger on the frame, will show “red” when in the fire position. The manual cocking lever is just above it.

This was my second exposure to Bates & Dittus launcher products. Their first product I worked with was the ExD-37. The launcher’s features and setup were very impressive, so when the company’s co-founder, Ed Dittus, mentioned that he had an M203-style 37mm underbarrel launcher in the works, I jumped at the chance to try it out. It is easy to quickly envision the potential law enforcement applications for the UBL, specifically as a less-lethal launcher for tactical teams using restricted rounds like beanbags, knee-knockers (wood batons), sting-balls and gas. 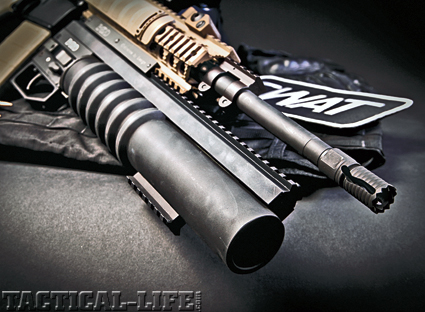 The UBL-37 allows for more versatility than most commercially available 37mm launchers. Note the strips of rail on the top of the barrel and below.

Launcher Details
The entirely American-made UBL-37 is best thought of as a re-creation of the military M203 military grenade launcher—not an exact copy. If you have worked with the military M203, you will find some distinct differences. The first is the chambering. The M203 is a 40mm weapon, capable of and designed for firing high-explosive defensive rounds. Bates & Dittus’ UBL’s 37mm chambering is design-ed for the launching of less-lethal rounds—originally various forms of tear gas for crowd control. High-explosive 40mm rounds can’t be chambered or fired from this weapon. 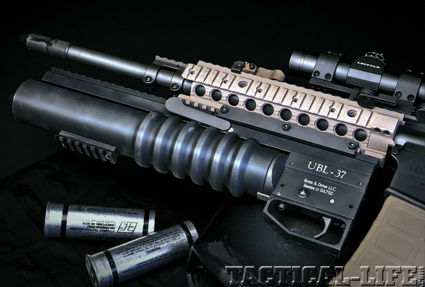 The trigger on the UBL-37 is a smooth single action variety. Unlike the military 40mm M203, it must first be cocked manually via a lever on the opposite side.