0
SHARES
198
VIEWS
Share on FacebookShare on Twitter
In one form or another, MIAs have been serving in the military for more than 50 years. Some of the most reliable and trusted .308 rifles ever built, they’re suited for any mission—be it in the jungle, desert or buck-rich forests.

Considered one of the most reliable battle rifles ever created, the John Browning-designed M1A is much more. Having proven itself in combat, patrolling the streets and on the competition circuit, it is perfectly suited to hunting. The .308 caliber is still one of the most popular for taking game of the appropriate size, and the M1A is more than accurate enough. Housed in a traditional stock, it provides the handling most hunters have come to know in their bolt guns with the added benefit of a semi-automatic action and a proven set of versatile iron sights. Given typical hunting distances, many if not most still use iron-sighted rifles, so a solid set of sights is a big bonus. Add a solid base and you can add the optic of your choice for even greater accuracy.

Void of the tactical accessories often added to the rifle, it is very comfortable to carry for all-day hunting treks. Another nice feature is the ability to safely carry it with the safety engaged. Unlike most hunting rifles, the M1A was designed from the ground up to be carried ready to go with the safety engaged. It gives you the ability to bring the rifle to bear very quickly. Proven reliable from the Arctic to the Sahara, you really do not get any more dependable than an M1A rifle. They work dirty, fouled or wet—not something that can be said for many weapons. In short, it remains one of the most versatile and reliable rifles ever produced.

Dressed For Game
Although many still use the classic wood stocks, the composite stock has been the favorite of many almost since its introduction. As beautiful as the wood stocks can be, they are susceptible to the elements like any other similar stock. For battle, that was not always much of an issue, but in order to maintain accuracy something was needed to ward off the effects of moisture. 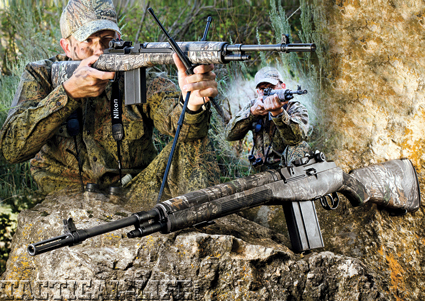 Composite has been the material of choice for years in just about every rifle that sees harsh climates. It is not only impervious to the elements, but it tends to swell less or not at all. They are also very rugged, often lighter, and require little or no maintenance. They also offer the ability to adjust the look of your rifle to the environment you find yourself in. Over the years, my M1A stocks have been painted many times. Most often seen in the military camouflage de jour, they are not limited to the military look. Many hunters have altered their composite stocks to fit the surroundings in order to bring home meat for the freezer.

Eventually, the industry caught up and started to provide standard camouflage patterns designed for the hunter. One of the most popular is Mossy Oak. It was developed like many things in this industry, through necessity. Toxey Haas, the owner and founder of Mossy Oak Camouflage gathered up a bag of dirt, sticks, and leaves. This became the basis for what created a revolution in practical and useful camouflage. Mossy Oak and others now offer a plethora of patterns that work in a multitude of specific environments.

The camo makers now cover up every area of the hunting market—from head to toe and everything in between. Although it is most widely seen on clothing, packs and accessories, it is also prevalent on rifles.

Springfield Armory offers what may be the simplest and most reliable semi-auto rifle chambered in .308 that can be utilized as a hunting rifle. The Springfield Armory Standard M1A in Mossy Oak is an out-of-the-box rifle that’s perfect for the hunter. Weighing in at only 8.8 pounds unloaded, it is lightweight and comfortable on long hikes into the backcountry. This rifle was carried for months on end by America’s finest, making its heritage uniquely suited to long walks with a rifle.

The rifle provided for testing was untouched from the factory. The Standard M1A is the most basic of rifles offered by Springfield Armory. It features a proven sighting system with a military aperture rear sight that is adjustable for windage and elevation. The front sight is a simple blade, but aftermarket sights of many varieties can be added. The barrel measures 22 inches and has a 1-in-11-inch twist rate. This rifle had a standard military flash hider attached, but a California-compliant muzzle brake is available as well. 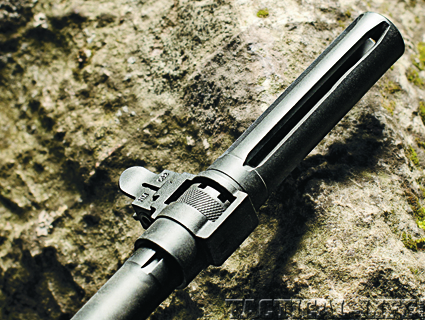 Flash suppressors are mounted on the standard 22-inch barrel. Springfield also has muzzle brakes for states that require them on hunting rifles.

The Standard has a military two-stage trigger that has a 5- to 6-pound trigger pull. The entire action is Parkerized for protection against the elements and is nicely mated to a composite stock molded in Mossy Oak camouflage. The rifle includes a single 10-round magazine. It accepts any M1A magazine ranging from 5 to 20 rounds or more. Many state hunting laws limit round capacity, so the smaller magazines become useful in this configuration. Springfield Armory offers a 5-round magazine in a very short “sporter” configuration, as well as the standard length, providing for use in most states. With the simple addition of the sling of your choice, this rifle is ready for the field.

Although it has been quite some time, shooting an M1A with iron sights once occupied a great deal of my time. Prepping for NRA competition, as well as simply training to be as accurate a rifleman as possible, I’ve fired many thousands of rounds from M1As. In my experience, the best way to improve your scoped-rifle accuracy is to become accurate with an iron-sighted rifle.

In order to wring the best accuracy possible from the rifle, my dusty equipment was dragged out and put to work. For the purpose of the test, I attached a military sling to the Springfield M1A.

All of the groups were fired from the prone position, with no support other than my elbow and the sling. Most of the ammunition tested was designed specifically for hunting, but some Federal Gold Medal Match was tested to try and get the best grouping. As expected, the Gold Medal yielded the best group at 1.25 inches. The rest all were around 1.5 inches at 100 yards. Given that this is a standard rifle, the accuracy is excellent and commensurate with any hunting rifle. Once the tightest groups were secured it was time to get real.

I removed all the gear and tested the rifle on the move. Fired from many different positions, the practical accuracy fell well inside 3 inches at 100 yards. When supported on a wall, tree branch or other solid object, 2-inch groups were more the norm. Throughout the testing, the rifle fed all of the ammunition without issue. The most consistently accurate hunting ammunition was the Hornady 165-grain SST, followed closely by the Silver State Armory loaded with the 168-grain Barnes TTSX. This bullet is a proven hunter and has been accurate for me in just about any loading. All in all, it was plenty accurate for any typical hunting environment.

M1A On The Move

Rather than utilizing some of my typical packs, I slung the rifle on my shoulder and carried it for a short hike. Using my 1907-style military sling, it was very comfortable. It could easily be moved to a ready position and put into action. As I moved through the woods, I spent some time placing the Mossy Oak against my local fauna. This camo really works well. Especially with the Parkerized metal, it blends nicely with the browns of our high desert. There is little doubt that this configuration would work well in most environments short of those that are primarily green. For true concealment, you can add a rifle wrap using your local environment to really break things up. For most, though, the M1A will work really well right out of the box. 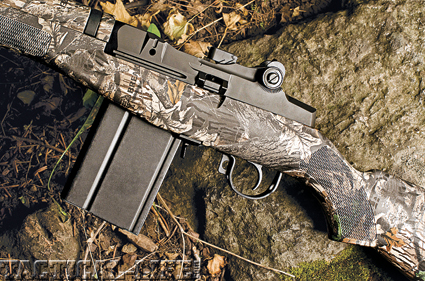 Lightweight and portable, Springfield’s Mossy Oak M1A is a solid hunting platform that blends in and maintains excellent accuracy whether using shooting sticks or unsupported. MIAs remain some of the easiest semi-autos to run. Another all-weather perk is that the controls can be easily accessed by a hunter’s gloved hands.

It is easy at times as we move on to the latest and greatest fad to forget that tried and true has been available for years. The Springfield Armory M1A is a prime example. This is a proven system that is accurate, reliable and versatile no matter the task. There was a day when its only real drawback was price, but the rest of the industry has dealt with that issue. If you are looking for a simple rifle that will perform many functions with little effort, the M1A just may be the ticket. With the Mossy Oak stock, the Standard M1A simply serves another duty, something it has done for over 50 years.