0
SHARES
2
VIEWS
Share on FacebookShare on Twitter
This Italian soldier is armed with a well camouflaged ARX160 during mountain operations in the Alps. After rigorous testing in extreme conditions, the new Beretta has proven that it can operate reliably in any environment across the globe.

Since the turn of the Century, many of the world’s armies, especially members of the NATO Alliance, have initiated programs to enhance the effectiveness of their combat soldiers. The focus of all of these programs is the fusion of technology in the fields of sensors, communications, and infantry weapons. When melded, these different technologies make the soldier more aware of the battlefield situation and more lethal at the same time. These technologies also allow individual soldiers to be part of a network across the full spectrum of combat, and interact more efficiently with assets such as armored forces, artillery fire support, close air support, and combat medical assistance, and allow the information to be integrated at all levels of the chain of command.

Italy launched such a program in 2001 known as Progetto Soldato Futuro or Project Future Soldier. A remarkable fact about this futuristic program is that the world’s oldest continuous firearms manufacturer, Beretta, is responsible for the development and production of the system’s rifle and grenade launcher. These two weapons, the Beretta ARX160 automatic rifle and the GLX160 grenade launcher, were engineered to be the most ergonomic, ambidextrous, lightweight, accurate, adaptable, and reliable infantry combat weapons in the world.

The Beretta ARX160 Rifle with the GLX160 Grenade Launcher mounted. Feature-packed battle rifle! Besides its folding stock, the ARX 160 sports a quick-change barrel system. A simple pull on the two side latches (similar to Beretta’s Px4 pistol disassembly latch) allows the operator to pull the barrel assembly forward and out of the top receiver. It literally takes a few seconds.Photo Courtesy Beretta.

In order to maximize the effectiveness of both weapons, they will be integrated with the latest in electro-optical sensor and fire-control systems developed by the Italian company SELEX Galileo. These systems include the ASPIS Day/Night Miniaturized Combat Weapon Sight for the ARX160, and the SCORPIO Grenade Launcher Fire Control System for the GLX160. Both of the Beretta-produced weapons and the SELEX Galileo-produced electro-optical fire control systems will be integrated with a host of other equipment made by different contractors. These sub-systems will include such gear as a body-carried personal computer, individual radio, GPS, body armor, camouflage ensemble, and protective clothing for various threat environments. 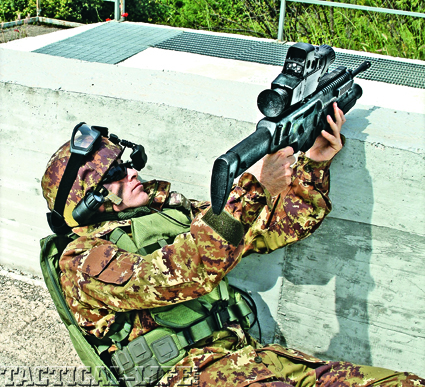 The SELEX Galileo ASPIS Combat Weapon System allows soldiers to aim the ARX160 using a helmet-mounted display so that soldiers will be able to engage targets around corners or from positions of cover while minimizing their exposure to enemy fire.

As Italy’s leading firearms manufacturer, Beretta is no stranger to military small arms. The succession of modern battle rifles began with the U.S.-designed M1 Garand, which Beretta produced under license for the Italian military as well as for export. Following the NATO adoption of the 7.62x51mm cartridge, Beretta developed the select fire, magazine fed BM59 (Beretta Model 1959) from the Garand action. In the 1970s Beretta introduced the AR70, in 5.56x45mm caliber, which saw limited service with Italian special operations forces. In 1984 the Italian Government announced a competition to select a new 5.56mm service rifle. Beretta entered their AR70/90 rifle, which was a highly refined and improved variant of the AR70 design. The Beretta AR70/90 won the competition and has served the Italian forces well since 1990.

21st Century Firepower
A number of factors have influenced the development of Italy’s newest battle rifle. Experience gained from years of operational service during missions in places like Iraq, Somalia, Afghanistan, Lebanon and the former Yugoslavia, as well as domestically in Italy, highlighted the importance of having a rifle that could operate reliably in any environment across the globe. The 1990s saw the emergence of accessories such as red-dot and holographic sights, flashlights, laser devices, vertical grips, and night vision equipment for military small arms. This meant that the ARX160 must be modular in order to accept any current and future accessories. Finally, the ARX160 had be soldier friendly and be easy to use and maintain in combat conditions.

Both the ARX160 and GLX160 have been used operationally in Afghanistan by Italian Forces. These Italian paratroopers are armed with the new rifle and grenade launcher while on patrol in an Afghan village.

Beretta has made good use of the lessons learned by Italian soldiers in the field. In order to be more reliable in sand and dusty conditions, the ARX160 has been designed to function with minimal lubrication. The ARX160 can also be field stripped into a bare minimum of components without tools, to facilitate maintenance. There are also no small parts or pins that can be easily lost. Ambidextrous, the Beretta ARX160 can switch its charging handle to either the right or left side in a matter of seconds. The direction that spent cartridge casings eject can also be easily changed. An adjustable four-position collapsible stock is a standard feature. The butt plate is rounded and features a checkered, slip-resistant surface. During transport in tight spaces or for use during actions such as fast-roping and parachuting, the stock can also be folded forward along the right side of the receiver.

The bottom rail on the ARX160 is a Picatinny in the front, but becomes a “T-rail” in the rear to provide a stronger mounting rail for the GLX160 grenade launcher.

For commonality, especially within NATO, the ARX160 uses the STANAG M16-type 30-round magazine. From the beginning the ARX160 has been designed to fire the 5.56x45mm NATO cartridge. However, in keeping with its modular nature, the ARX160 can also be configured to fire a selection of other popular calibers including 6.8x43mm, 7.62x39mm, and 5.45x39mm. In order to accommodate the multitude of available accessories the ARX160 has four full-length, MIL-STD 1913 “Picatinny” rails on the top, sides and bottom of the weapon. If needed, portions of the rail system can be removed or protected by rail covers. The ARX160 comes with rear and front flip-up sights that attach in front and behind the rail. All common rail-mounted weapon sights from companies such as Burris, Aimpoint, EOTech, Leupold, and Trijicon are fully compatible with the ARX160.

A latch-operated barrel release allows operators to remove and change barrels in a matter of seconds. Currently a 16-inch barrel and a 12-inch barrel are available.

Shooting Around Corners
When used as part of the Future Soldier system, the ARX160 will be equipped with the ASPIS Day/Night Miniaturized Individual Combat Weapon System manufactured by SELEX Galileo. ASPIS is designed to be both an observation device as well as an aiming device and combines multiple capabilities into one lightweight unit. For medium to long-range observation and sighting, ASPIS uses a high definition video camera that is functional in both bright and low-light conditions. Video imagery can be viewed through the ASPIS eyepiece or it can be transmitted via wireless link to a Helmet-Mounted Display, called NIMOS, which is another component of Project Future Soldier ensemble.

With the press of a button the ASPIS camera can be switched to a thermal imaging mode, which can be used either at night or during the daylight when a potential target might be obscured or camouflaged. Imagery seen through the ASPIS is bore sighted to the ARX160, allowing the soldier to aim the weapon by looking through the ASPIS eyepiece or the NIMOS Helmet Mounted Display. One advantage of being able to aim the weapon using the helmet display is that soldiers will be able to engage targets around corners or from positions of cover while minimizing their exposure to enemy fire. The sighting reticule is user-programmable so that it can be adjusted to suit individual shooters.

For close-combat situations, ASPIS features a red-dot sight, located just above the camera eye piece, which allows for quick target acquisition and engagement. There is also a visible laser pointer for instinctive shooting as well as an infrared laser pointer that can be used when night vision goggles are being worn. ASPIS weighs in at just over three pounds, including batteries, and is less than 10 inches in length. ASPIS uses an M1913 rail interface for mounting purposes and is powered by a rechargeable lithium-ion battery or common AA size batteries.

Launching Grenades
Like the ARX160 rifle, the GLX160 grenade launcher was designed to be lightweight and modular. The GLX160 mounts to the ARX160 by means of an M1913 rail interface or it can be used in a standalone configuration using a pistol grip, and five-position telescopic stock. The launcher only adds two pounds to the weight of the ARX160 and weighs less than five pounds when used with the standalone stock.

SELEX Galileo produces the SCORPIO Grenade Launcher Fire Control System for the GLX160. SCORPIO has many features that aid the grenadier to successfully engage targets. A laser range finder is incorporated into the system so that the distance to target can be quickly determined. Ballistic data and firing tables for specific types of ammunition can be uploaded into SCORPIO, which allow the grenadier to quickly and accurately fire on both stationary and moving targets. When firing at stationary targets SCORPIO can complete ballistic computations in less than one second while computations for moving targets can be completed in less than four seconds.

The combination of Beretta’s ARX160 and GLX160 along with SELEX Galileo’s ASPIS and SCORPIO fire control systems gives the Italian combat soldier a cutting-edge tool on today’s battlefields. Italian paratroopers serving in Afghanistan have already used the ARX160 in combat conditions. ARX160 rifles have also been procured by Albania for use in Afghanistan by SF operators and by Mexico for use in their ongoing drug war. Beretta is also making the ARX160 rifle available to the U.S. law enforcement market although at present the ARX160 is only available in select-fire configuration. The ARX160 and GLX160 will most likely become a popular choice for many more military and police units around the world owing to their modular design and other exceptional features.

TW has learned that a civilian version of the ARX160 rifle is on the horizon. For more information visit Beretta.com.