by Christian Shepherd
in Guns, Shotguns
0

1
SHARES
19
VIEWS
Share on FacebookShare on Twitter
BENELLI M4 TACTICAL
Italian gun maker Benelli is world-renowned for its tactical shotguns. Models such as the SuperNova Tactical, M2 Tactical, M3 Convertible, and M4 Tactical are in service with the special operations units of Italy, France, Estonia, Macedonia and the United Kingdom, among many others. Benelli’s SuperNova Tactical is a pump-action shotgun that features a lightweight receiver that is noted for its strength. It is available with either rifle sights or adjustable ghost ring sights. The M2 Tactical, like many Benelli semi-automatic shotguns, is inertia driven and uses recoil to operate the action. This reduces many of the problems associated with gas-operated systems, such as the tendency to malfunction in adverse environments and due to burnt residue fouling. 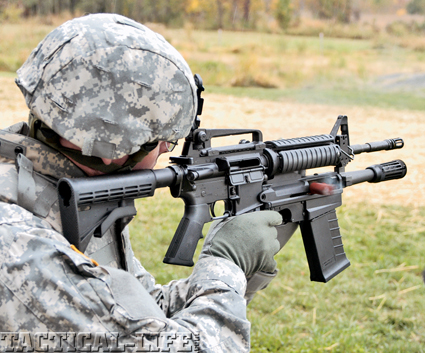 One of the newer concepts in the field of combat shotguns is the M26 Modular Accessory Shotgun System (MASS). In service with the U.S. Army, the M26 is a modular firearm that is primarily designed to be attached as an accessory to an M4 Carbine or other assault rifles. When attached to an M4, the M26 can be zeroed to the optical or iron sights of the host weapon. The M26 can also be detached from the host rifle, have an M4-type collapsible buttstock attached and used independently in confined spaces such as vehicles and building interiors. In the standalone role, an optical sight can be installed using an integral Picatinny accessory rail. 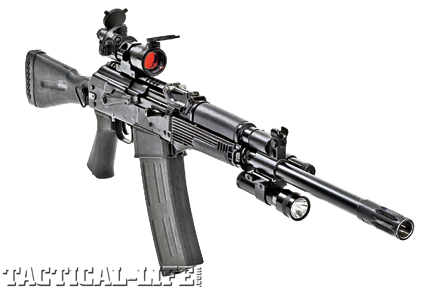 Elite Russian Spetsnaz, or Special Purpose Troops, of the army’s GRU intelligence branch and the FSB’s Alfa Counter Terrorism Unit use a unique combat shotgun based on the Kalashnikov operating system. Known as the KS-K, this military shotgun is produced in Russia by the Izhmash Company. A civilian-legal variant of this shotgun is sold in the U.S. under the Saiga brand name. The KS-K shotgun is similar to the Kalashnikov assault rifle in both layout and operation. One benefit of this: Shooters familiar with the AK family of rifles can be easily cross-trained to use the KS-K. Unlike the rifles it is based on, however, the KS-K is semi-auto only. An AK-74-style side-folding stock is used on the KS-K.