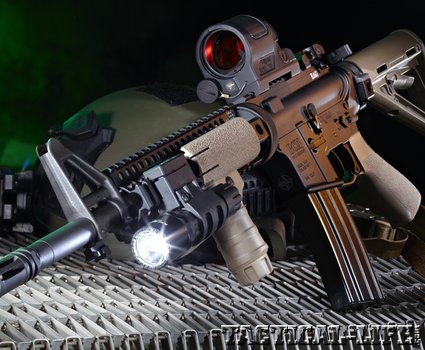 The difference between one AR-15 and another will be the quality of the build components. I have seen a number of “Franken-guns” built with gun-show component end up being disasters in terms of reliability. And if your gun won’t run, that may ultimately result in your injury (or death). The primary reason gun owners carry combative firearms is to defend their lives and the lives of others. If your gun fails mid-conflict, you will be behind the power curve for winning the fight, even if you can quickly clear that stoppage. Your personal carry gun is not a toy and not the place to scrimp on quality, which your life may very well depend on.

One company that has dedicated itself to building the best guns possible is Bravo Company Manufacturing, better known as BCM. Founded in 2005 by a former Marine, BCM builds top-quality AR-15s at their Hartland, Wisconsin, facility. BCM builds weapon systems that are manufactured, reinforced and tested to meet the demands of law enforcement, military, security and peacekeeping professionals around the globe, in some of the most intense and stressful environments imaginable. There are no shortcuts or substitutions. No half measures. BCM was established to do one thing: provide American warriors with the best possible military-grade weapons. BCM firearms are built as sturdy as the shooters who use them.

I recently had the opportunity to test one of BCM’s carbines and selected the EAG Tactical. The gun comes from the factory not only built to high standards but also featuring the accessories you need to take this weapon to the streets. “EAG” refers to E.A.G. Tactical, a training company founded by Pat Rogers, a retired USMC chief warrant officer and a retired NYPD sergeant with extensive street experience. E.A.G. Tactical provides weapons manipulation and tactics training to military, law enforcement and qualified civilians throughout the U.S. Pat is highly regarded in both the military and law enforcement communities. I have met him several times and consider him one the best instructors on the circuit. A copy of Pat’s training DVD is included with each EAG Tactical carbine so the user can obtain a more in-depth understanding of how to run the weapon. Pat’s input on the carbine is readily apparent. 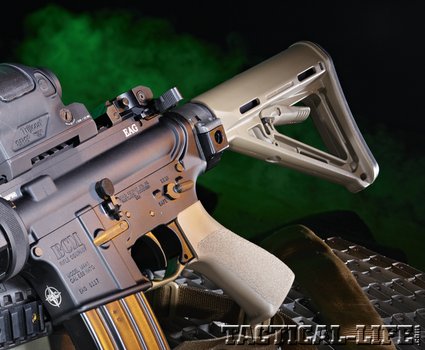 If you are not sure what I mean by “quality,” let me use the EAG Tactical’s upper receiver as an example. The upper itself is machined from a 7075-T6 aluminum forging and is hardcoat anodized per mil-spec 8625F Type III Class 2. The flattop with a Picatinny rail allows for the mounting of varied optics or a standard carry handle. A Troy Industries BCM folding battle sight (back-up iron sight) comes standard on the upper rail. The mid-length gas system, one many knowledgeable shooters believe is the most reliable, is surrounded by a LaRue Tactical 9-inch, free-floated handguard that is also a rail system in itself. These rails are covered by TangoDown SCAR rail covers and come with a TangoDown rail vertical forward grip. The standard charging handle has been replaced with a BCM Gunfighter Model 3 (a handle many feel is the best available) featuring a bolstered T-section and enlarged release lever. The package also includes a SureFire LED white light and a Viking Tactics mount that permits the shooter to use the tail cap switch to activate and extinguish the light.

The barrel assembly continues along these lines, with a cold-hammer-forged unit that has a 1-in-7-inch twist and is independently certified as mil-spec-grade steel. The barrel is 14.5 inches in length with a permanently fixed flash suppressor for an overall barrel length of 16 inches, keeping the barrel as short as legally permitted. The barrel has a 5.56mm NATO chamber and is chrome-lined with a standard AR-15 sight tower attached. The bolt is machined from mil-spec steel and is high-pressure tested to ensure long life. The carrier is also chrome-lined, as is the gas key, which is staked to mil-spec. The extractor is made from tool steel. 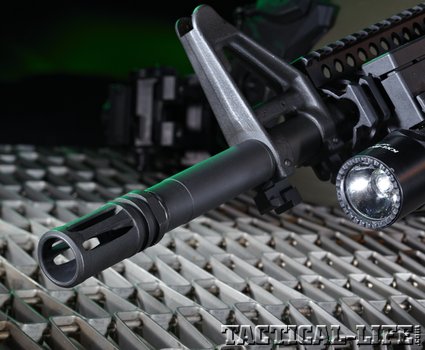 The 14.5-inch barrel comes with a permanently fixed flash suppressor for an overall barrel length of 16 inches 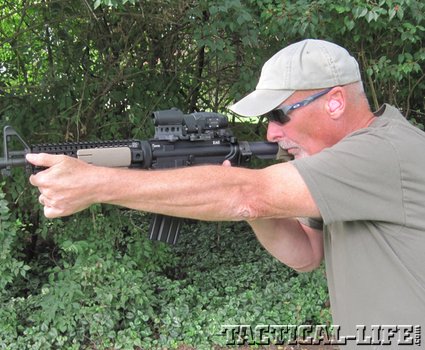 The list of top-notch qualities does not stop with the upper. The lower is machined from the same aluminum forgings and coated same as the upper. The lower is cut for the installation of a full-auto sear assembly for military use. A TangoDown BattleGrip is added to help the shooting hand achieve not only solid contact but also proper trigger finger placement and access to the left-side safety lever. A Magpul MOE Enhanced triggerguard fills the annoying gap just forward of the grip and offers greater room for gloved hands. The USGI H-Buffer is surrounded by a Magpul MOE six-position adjustable rear stock. A TangoDown sling mount rounds out the package. As you can see, BCM has put in the effort to obtain the best accessories available for its carbine so the user won’t have to. This gun is packaged well, but as they say, the proof is in the pudding.

Shooting Impressions
The only way to determine the value of a combative firearm is to fire as quickly as possible. So I grabbed the test-sample EAG Tactical and headed to the range. I began by testing the carbine for accuracy at 100 yards, shooting five five-shot groups from a sandbag benchrest and charting velocity at the same time. While iron sights are capable of delivering reasonable groups at 100 yards, they certainly are not optimal. An optical sight is the way to go, and I like the idea of reducing weight and bulk as much as possible. I choose to test the carbine with an Aimpoint T-1 Micro red-dot. 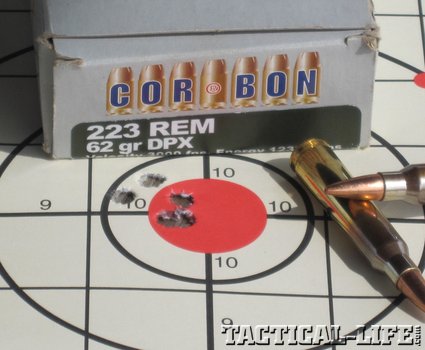 Capable of being used with night vision, the Micro T-1 weighs a mere 3.7 ounces and is parallax free. Smaller than the palm of your hand, the T-1 is a 1X optic, meaning it offers no magnification, which is fine. The general rule of thumb is to have 1X magnification for every 100 yards the weapon will likely be used in. For law enforcement purposes, the T-1 alone will likely be fine, but if a longer shot is needed, some type of magnification would certainly be desirable. Also, wanting to maximize the accuracy of the BCM carbine, I opted for Aimpoint’s equally outstanding 3X Magnifier unit. This small tube fits just to the rear of the Micro T-1 and aligns perfectly, giving the shooter a 3X red-dot scope. It comes with a hinged mount that allows it to be rotated out of the way quickly if a close-quarters shot is needed. This combination might very well be the optimal system for a combative carbine.

The BCM EAG Tactical carbine proved to be quite accurate, regardless of the type or weight of ammo used. Considering the care that goes into each of these guns, it was hardly surprising the gun shot so well. My factory trigger broke right at 4.5 pounds, which I think is darn near optimal for this type of gun. Everyone who has shot a firearm more than once knows any catches or glitches in a trigger action will inhibit accurate shooting, and I am happy to report the BCM trigger was smooth from front to back—something kind of remarkable for a factory trigger. Obviously, BCM understands what a combatant needs from a fighting trigger. 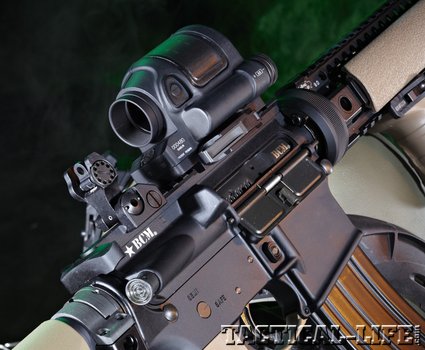 After zeroing and then testing the gun for accuracy, I completed the test by shooting an additional 300 rounds through the carbine and conducting a number of skill drills. One drill I like is to perform a rifle version of the El Presidente at varied ranges. Trying to stay within Jeff Cooper’s 10-second time limit, I shot the drill at 10, 15, 20 and 25 yards, sometimes shot headshots on the second run through the targets. This allows me to work many of the fundamentals (essentials, really) of shooting into a drill that only requires 12 rounds. With ammo costs rising, such drills are a great way to stay sharp at a reasonable cost. Another drill I like is to advance on target and drop to a speed kneeling position then fire two or three rounds as soon as I can get sight acquisition. Drills like this show the speed advantage the red-dot optic has over iron sights, as all the shooter has to do is superimpose the dot on the target rather than look at the front sight through the rear and align with the target. Simple is good in combat.

I also worked on rapid sight transitions, manipulating the 3X magnifier out of the way and flipping up the rear sight as if the red-dot faded. While Aimpoint sights have proven to be super reliable with long battery life, it is still a good idea to be able to transition to irons quickly if the need arises. Working from varied sling positions is also advisable, and the quick-adjustment VTAC sling supplied with the gun makes performing such drills all the easier. I have tried several one-, two- and three-point slings over the last few decades and have always found the two-point slings the most satisfying. I used simple Mountain Slings with slider buckles for years, so being able to quickly pull tight or loosen with the tab on the VTAC sling just seems to be the easiest way to get the job done. 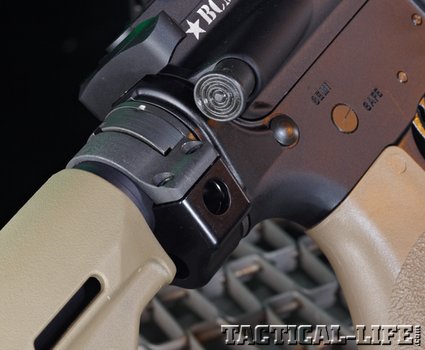 The Bravo Company EAG carbine might not be the cheapest gun on the market, but with everything you get, in both product and design quality, it’s a good deal for your money. To find out more about the Aimpoint optics call 877-246-7646 or visit aimpoint.com. If you or your agency is looking to add carbines to your arsenal, check out BCM’s EAG Tactical carbine. It truly has everything you need. For more information, call 877-272-8626 or visit bravocompanymfg.com. 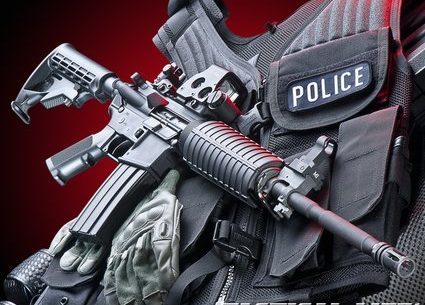