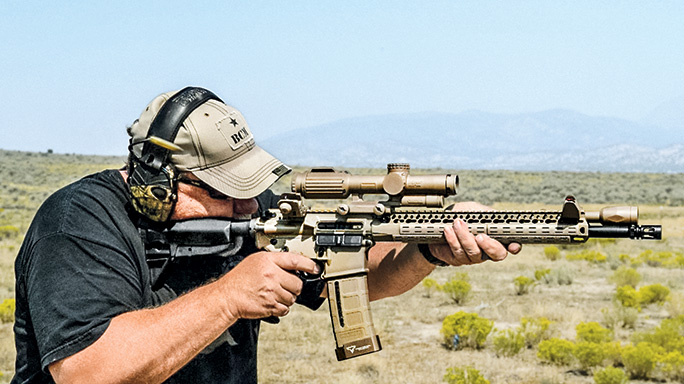 1 of 6
Alpha Dog: Bravo Company’s RECCE-16 KMR-A Rifle
Paired with Trijicon’s tank-tough VCOG scope, the RECCE-16 KMR-A ran flawlessly with all of the test ammunition out to 400 yards. 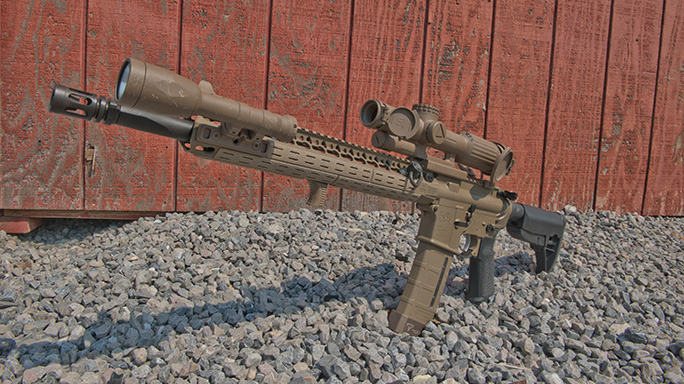 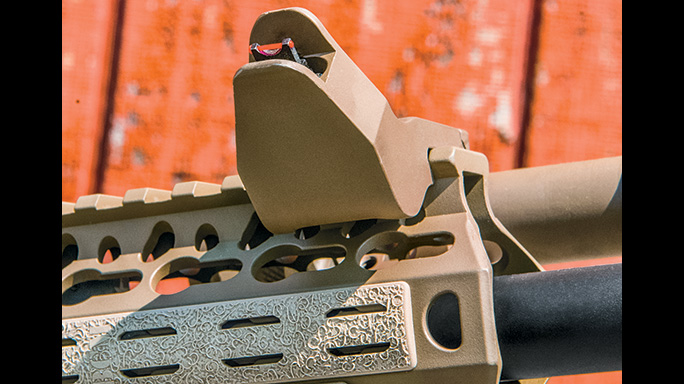 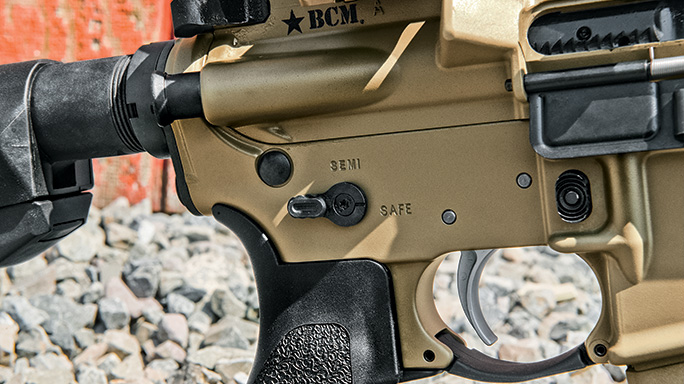 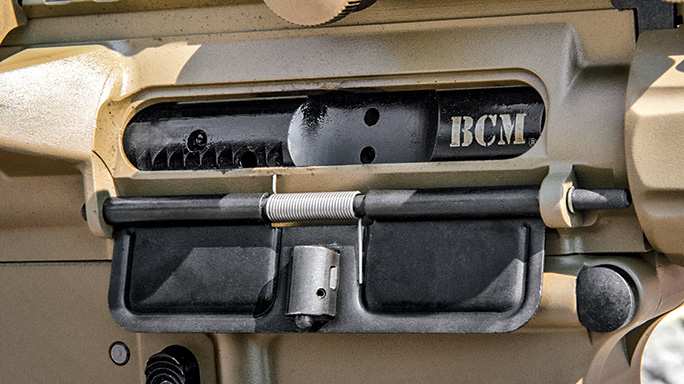 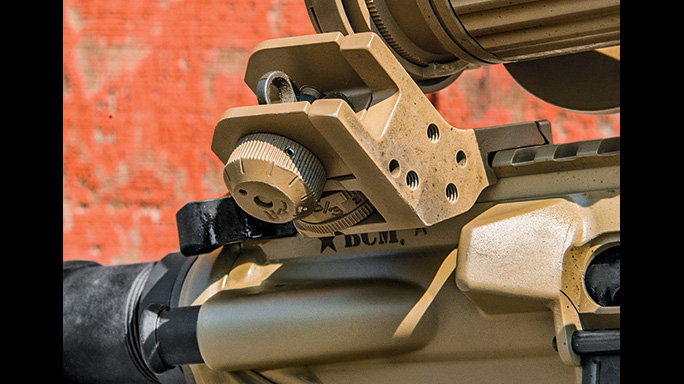 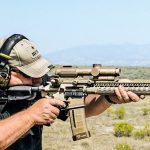 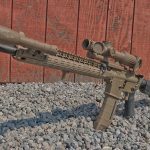 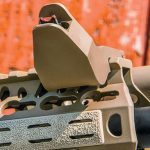 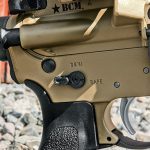 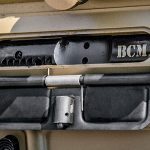 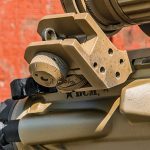 I’ve tested several Bravo Company Manufacturing (BCM) rifles over the years, and it has always been a pleasure. These are reliable, accurate and well-balanced weapons that are built for hard use. Many professionals choose BCM rifles, and for good reason: They can withstand the harshest conditions.

Each rifle’s internals are properly tested for strength and fit; the barrels are made from high-grade steel that is both high-pressure (HP) and magnetic-particle (MP) tested. The barrels are also contoured to strike a nice balance between weight, longevity and accuracy. The rifles have 5.56mm chambers and use M4 feed ramps for smooth operation with most commercial and mil-spec ammunition. Assembled with extreme attention to detail, BCM rifles rival many custom or semi-custom builds at half the price. Finally, the company offers excellent customer service. Put it all together and it’s hard to go wrong with BCM.

BCM’s RECCE series rifles are highly regarded in the industry, and the company offers both 14.5- and 16-inch-barreled versions as the RECCE-14 and RECCE-16, respectively. AR rifles utilizing 14.5-inch barrels with pinned muzzle devices have become pretty popular recently, but I prefer a 16-inch barrel that allows me to install various flash suppressors, muzzle brakes or sound suppressors without the need for filling out NFA paperwork. BCM’s new RECCE-16 KMR-A, with its Flat Dark Earth Cerakote finish, certainly fits the bill.

Starting with 7075-T6 forged receivers, the upper houses a 16-inch, government-profile barrel with a 1-in-7-inch twist rate. The bore and chamber are chrome lined for longevity and consistent operation. The muzzle sports 1/2×28 threading and comes capped with a BCM Gunfighter Mod 0 compensator. Surrounding the barrel and mid-length gas system is BCM’s slim, 13-inch-long KeyMod Rail-Alpha (KMR-A) handguard, which features a long Picatinny top rail and KeyMod slots along the sides and bottom for accessories.

I planned on using the RECCE-16 KMR-A for some upcoming events, including a 3-Gun match. So, I needed foolproof accessories, most of which were luckily in a matching Flat Dark Earth finish. For targeting, I installed a Trijicon VCOG using a segmented-circle reticle designed for 77-grain ammo, as well as a set of offset iron sights. Next I installed Zero Bravo’s Reversible Hand Stop (RHS) for a solid grip in hand and on barricades.

To carry the RECCE-16 KMR-A, I added a Blue Force Gear Vickers sling, and for lighting I installed a SureFire Scout flashlight in a Haley Strategic Partners Thorntail offset mount. BCM’s KeyMod rail panels were added to the handguard for a solid, comfortable grip, and I also added an ambidextrous, 45-degree safety from Battle Arms Development (BAD).

The RECCE-16 KMR-A’s accuracy was excellent, especially with Black Hills’ 77-grain TMK ammunition. Since this is also is my preferred competition load, I was rather pleased and used it for zeroing work. Starting at 25 yards, I adjusted the scope from its last platform and fired a five-shot group. The group was barely measurable, about as close to “same hole” as it gets. Not every rifle shoots the Tipped MatchKing round well, even at that range. Moving back to 50 yards, the group opened up to 0.4 inches, and at 100 yards, this ammo produced the best five-shot group, which measured 0.74 inches. The RECCE-16 KMR-A was no slouch with any of the match-grade ammunition, but it really seemed to shoot this round exceptionally well.

Moving from 50 to 400 yards, I confirmed the Trijicon VCOG’s BDC reticle on 6-inch steel targets. Each resulted in a resounding ding on steel. With no wind, it was easy to get hits on target—almost too easy. Find your range, hold properly and press the trigger. This is one of the reasons I prefer the VCOG on carbines for competitions or duty. It is fast, clear and very accurate. Properly zeroed, the BDC reticle is one of the most accurate I’ve used. It even worked well out to 600 yards, getting the most out of this chambering. The VCOG is also very rugged, making it practical for duty applications. At 1X magnification, the illuminated reticle works well, even in bright daylight.

Working around various range obstacles, the RECCE-16 KMR-A was well balanced, lightweight and very handy. With its 16-inch barrel, it ran well in my range’s shoothouse as well as around barricades. The barrel threading is also a huge plus, making it easy to swap between a flash or sound suppressor for duty uses, or a muzzle brake for competitions. This is an excellent example of a versatile rifle perfectly suited to several missions, including duty, competition or self-defense.

As I expected, the rifle ran flawlessly. It digested everything I fed it, including three different frangible rounds and today’s common “green” ammunition. Southern Ballistic Research’s 50-grain copper/polymer green ammo ejected perfectly while maintaining tight groupings. I also used the RECCE-16 KMR-A to great effect during a training course with some 40-grain frangible rounds that have caused issues with other rifles.

It’s always a pleasure to test BCM rifles, and they never surprise me. Designed to last a lifetime and built with extreme attention to detail, they just flat-out work.

Direct-impingement rifles remain the best choice where simplicity and assured operation are key. For most professionals, the original direct-impingement design remains the best system. These rifles are affordable, have few moving parts and are easy to maintain. BCM’s direct- impingement rifles are some of the best available. They use true mil-spec parts, making repairs in the field easy. They also work with a broad range of ammunition. The RECCE-16 KMR-A’s mid-length gas system provides a soft-shooting rifle that runs a bit cooler and is generally more reliable. BCM parts are designed with users in mind, making them ready to go right out of the box.

All in all, this is an excellent rifle perfect for most any user. The Flat Dark Earth Cerakote finish makes it look better while enhancing the carbine’s corrosion resistance. If you are looking for a duty gun, a competition machine or just a fantastic target rifle, give the BCM RECCE-16 KMR-A a very close look. You won’t be disappointed. 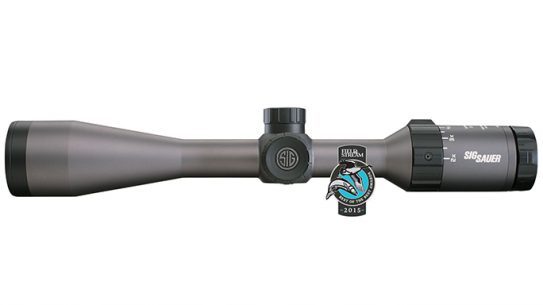 Let the first shot be the only shot needed with these new hunting riflescopes...