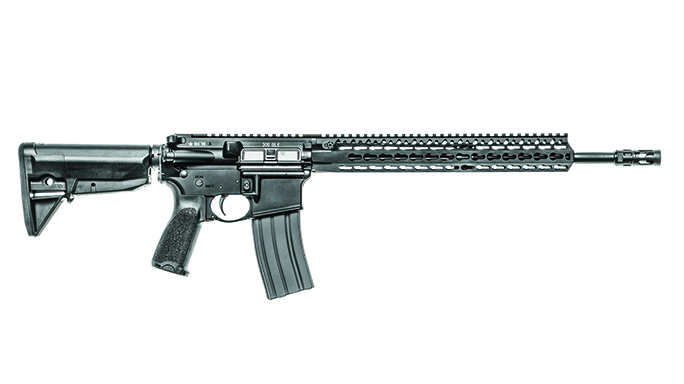 1 of 10
BCM RECCE
The RECCE-16 KMR-A is named after its 16-inch barrel and lightweight KMR-A handguard—just two of the many features that help this AR stand out in a crowd. 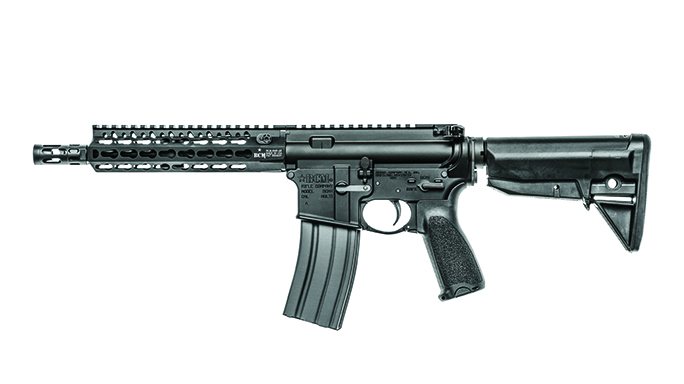 2 of 10
BCM RECCE
The 9-inch-barreled version is a perfect choice for shooters who need a suppressed SBR to work in close quarters while still offering 300 Blackout power. 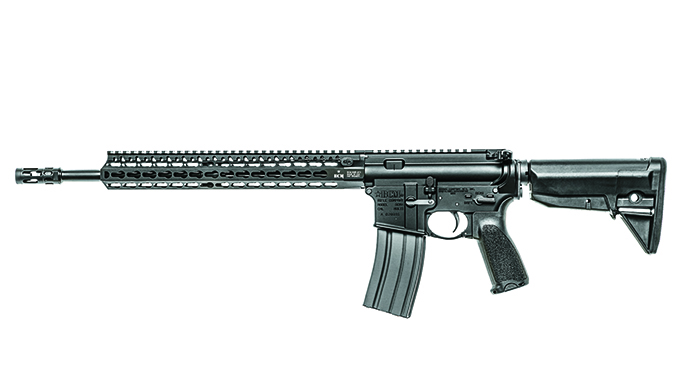 3 of 10
BCM RECCE
The RECCE-16 KMR-A carbine is packed with Bravo Company’s Gunfighter features, including a Mod 4 charging handle, a Mod 3 pistol grip, a QD end plate, an enlarged triggerguard and much more. 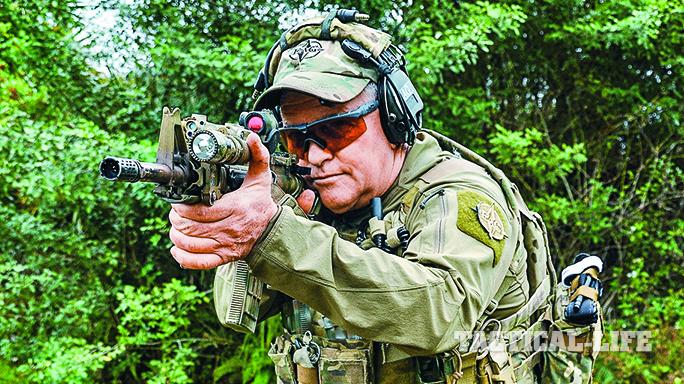 4 of 10
BCM RECCE
The late Pat Rogers, an expert tactical trainer with plenty of “been there, done that” experience, runs one of the EAG Tactical carbines he helped design with Bravo Company. 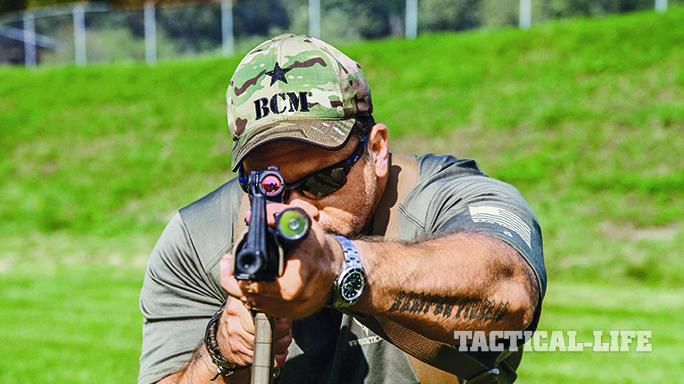 5 of 10
BCM RECCE
Paul Buffoni, a retired U.S. Marine and the founder of Bravo Company Manufacturing, takes aim with a BCM MID-16 carbine with an A2-style front sight. 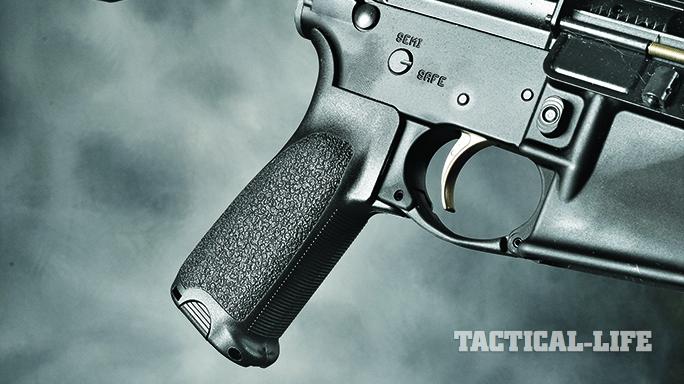 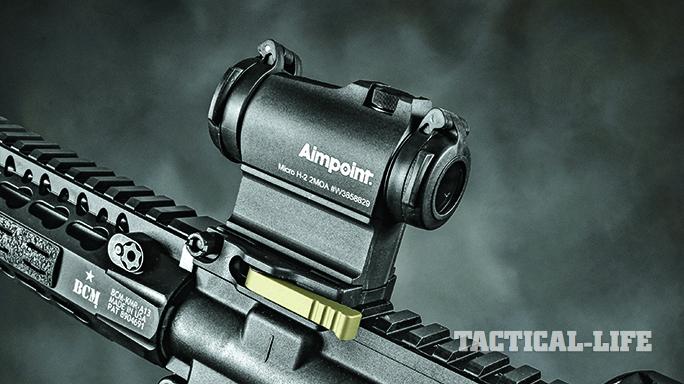 7 of 10
BCM RECCE
While the author used a Leupold Mark 4 scope to wring out the 16-inch-barreled carbine, he used a quick-targeting Aimpoint Micro T-2 to evaluate the SBR. 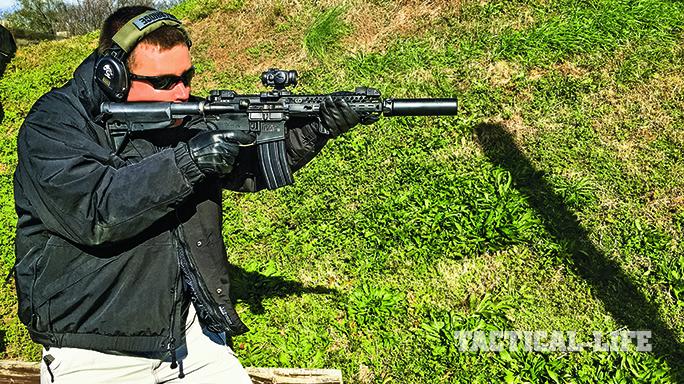 8 of 10
BCM RECCE
The author added an older SureFire Mini 7.62 sound suppressor to the 9-inch-barreled SBR, bringing its overall length to only 32.35 inches, and it didn’t miss a beat. 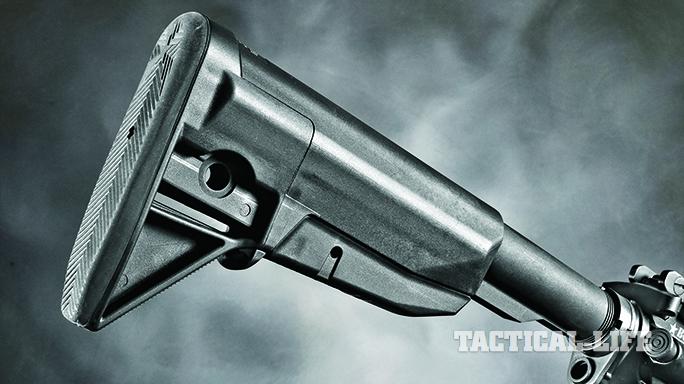 9 of 10
BCM RECCE
BCM’s Gunfighter stock features a rubber buttpad, an ambidextrous QD sling mount and a VBOST tab so users can secure a sling against the side of the stock with a rigger’s band or bungee. 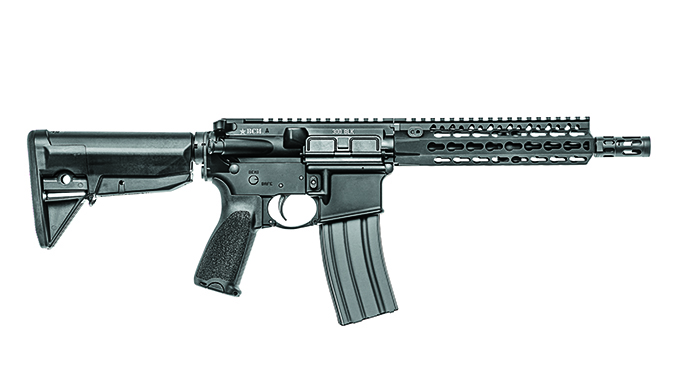 10 of 10
BCM RECCE
Both of the test barrels came capped with BCM Gunfighter Mod 1 compensators with tuned slots and interior cones to help reduce recoil, flash and muzzle rise. 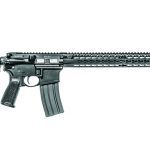 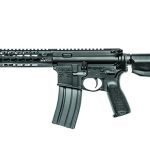 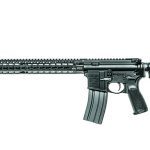 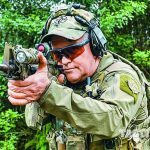 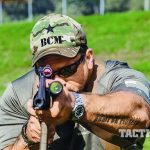 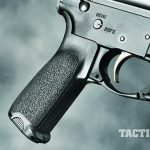 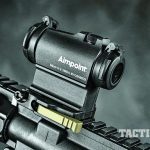 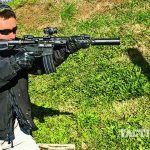 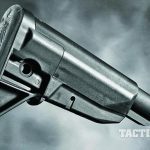 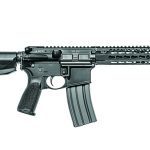 In 2003, Paul Buffoni started a small online and e-commerce company in the basement of his home. Buffoni’s goal was to provide high-quality, mil-spec products to military and law enforcement customers. This expanded to include overseas contractors and the general commercial market that needed quality AR/M4 components. Now, some 13 years later, Bravo Company Manufacturing (BCM) has grown to over 30 employees and occupies a 30,000-square-foot manufacturing facility. BCM’s line of products has also grown to include barrels, upper receivers, stocks, pistol grips and a complete line of duty-ready rifles. All of BCM’s products are manufactured to exacting specifications. To quote Buffoni, “I look at firearms the same way a paratrooper looks at his parachute. It is going to save his life and if it doesn’t, there are going to be dire consequences.”

The BCM Gunfighter accessory line has become a research and development skunk works and has produced some of the best accessories on the market. As a retired U.S. Marine, Buffoni understands that ounces equal pounds and pounds equal pain. However, strength and reliability can’t be compromised along the way when it comes to developing weapons. Nowhere is this more evident than with the BCM KeyMod Rail-Alpha (KMR-A) handguard system. In addition, BCM’s pistol grips and stocks are also extremely popular due to their durability and ergonomic designs.

BCM is a company that I have followed through the press and through the late Pat Rogers of EAG Tactical. I first met Pat in 1996 when he instructed a Gunsite course at Ft. Benning, Georgia. Since that time, Pat completed a successful career with both the NYPD and the U.S. Marine Corps. Before his passing earlier this year, Pat’s tactical training and his shoothouse/CQB classes were in high demand by both the law enforcement and military communities. Pat was a traditional New York kind of guy (translation: He was not concerned about being politically correct or whose feelings he hurt). He was opinionated and, based on his experience and wealth of knowledge, his opinions are still well respected. If you search YouTube, will find several videos of Pat sharing his experiences with BCM rifles in some of the most extreme environments. So it was high praise when Pat Rogers endorsed BCM.

Every BCM rifle starts with receivers that are machined from hardcoat anodized 7075-T6 aluminum. The upper receivers feature M4 feed ramps and barrel extensions. The BCM RECCE lower receiver is a typical mil-spec unit with standard operating controls and fire control components. The bolt is shot peened and high-pressure (HP) and magnetic-particle (MP) inspected. To reduce corrosion and extend service life, the gas key and bolt carrier are hard chromed.

At the heart of any rifle is the barrel. The 16-inch BCM barrel is manufactured from 11595E certified steel, and it has an enhanced profile that is fluted behind the gas block to decrease weight and help dissipate barrel heat. Forward of the gas block, the barrel is tapered to reduce weight and improve the carbine’s balance. The bore and chamber are chrome lined while the exterior is finished in manganese-phosphate. The barrel is fitted with the BCM Gunfighter Mod 1 compensator, which features tuned slots and an interior cone to mitigate recoil and muzzle flash. The design also minimizes the over-pressure and “crack” that is found with some other designs.

The carbine has standard mil-spec operating controls, including a single-sided safety, bolt release and magazine release. The BCM Gunfighter Mod 4 charging handle is machined from 7075-T6 billet aluminum and features an extended, medium-sized latch. BCM charging handles are designed to be compatible with the current CQB techniques that call for the user to manipulate the charging handle from only the left side of the receiver.

Of course, the carbine features a 13-inch KMR-A rail, which has been designed to be lightweight without sacrificing strength. With mounting hardware, it weighs a mere 9.2 ounces and is only 6.25 inches in diameter. By comparison, the Knight’s Armament URX rail, while not a KeyMod system, measures 7.75 inches in diameter. BCM also offers KeyMod Rail Panels that are made of polymer and snap into place to provide enhanced traction. The panels are available in four colors and may be cut to any length. The edges of the panels are rounded, and each panel has vent cuts to improve airflow around the barrel.

The RECCE carbine comes standard with BCM’s Gunfighter Mod 3 grip and stock. The Mod 3 grip has a reduced angle and a high-rise beavertail backstrap for improved ergonomics and trigger control. It also has a trapdoor for internal storage as well as an extended tang to fill the gap between the grip and the triggerguard. The BCM Gunfighter stock is a low-profile and snag-free design with no edges or openings to get hung up on the shooter’s gear. QD sling connections are located on each side of the stock, and a sling slot allows for the use of non-QD slings. One unique feature is the VBOST (Vehicle Borne Operations Sling Tab) that interfaces with a rigger’s band or bungee used to secure the sling against the stock. Finally, its contoured rubber buttplate ensures a positive mounting surface.

The RECCE SBR I tested featured a 9-inch, 1-in-7-inch-twist barrel, an 8-inch KMR-A handguard and BCM backup sights. I installed the Gunfighter stock and Mod 3 pistol grip on a registered SBR lower for the evaluation. In addition, I installed a BCM Kinesthetic Angled Grip (KAG). The KAG is designed to give positive retention when using the thumb-over-bore “C-clamp” method for holding the rifle. The KAG mounted directly to the KMR-A rail and works well with both the C-clamp and more traditional methods. I found that it provided a consistent and safe support hand index, which is critical on SBRs. I also installed a flush-fit QD receptacle at the 11 o’clock position, just forward of the receiver, and installed a Blue Force Gear Vickers Sling.

BCM’s website and literature is up front when it comes to the reliability of its 300 BLK rifles. With loads ranging from 110 to 220 grains, reliability is directly dependent on how the rifle is gassed and what buffer weight is used. BCM recommends running its rifles with a carbine buffer when using subsonic ammunition and an H3 buffer when using high-velocity ammunition. This became extremely important when we hit the range to wring out the 16-inch-barreled carbine and the 9-inch-barreled SBR. Both were 100-percent reliable when using the appropriate-weight buffer.

For 100-yard accuracy testing, I installed a Leupold 2.5-8x36mm Mark 4 scope using a LaRue Tactical SPR mount. As the accompanying chart reflects, the 16-inch-barreled gun was more than capable of providing groups of 1.5 inches or less. The 1-in-7-inch-twist barrel worked very well with the 125-grain PNW load, which had the lowest extreme spread and standard deviation. This ammo also produced the best group of the day, measuring 0.75 inches. Both the 220-grain Gorilla and PNW loads produced 1-inch groups.

We were fortunate to be shooting at the Strongpoint Shooting Complex located outside Waverly Hall, Georgia. The complex has been renamed and is under new management. Recent improvements include pushing the rifle range to 400 meters and installing steel targets. We found that engaging targets out to 300 yards, with any of the supersonic loads, was relatively easy with the Leupold Mark 4 scope on the 16-inch-barreled carbine and an Aimpoint Micro T-2 sight installed on the 9-inch-barreled SBR. With the subsonic loads, we found that hits at 200 yards were predictable once the holdover was established. We also ran the carbine with the new Aimpoint Micro H-2 that is now being issued to the FBI’s tactical teams. The sight’s crisper 2-MOA dot was a major advantage when engaging targets beyond 200 yards. Headshots were easy.

With a little more work, we were able to make hits at 300 yards with the subsonic ammo. Using a ballistic calculator, we established the holdover at 300 yards to be roughly 35 MOA with the 16-inch-barreled gun and 44 MOA with the 9-inch-barreled gun. Surprisingly, the calculator projected the 300-yard velocity of the 220-grain SMK to be 920 fps from the 16-inch barrel and 821 fps from the 9-inch barrel. We also found that the 147-grain PNW “range” load was surprisingly effective when engaging steel out to 300-plus yards.

Knowing that it would be an injustice if we did not shoot one of the BCM RECCE carbines suppressed, I installed a SureFire flash suppressor/adapter on the 9-inch-barreled SBR. Using an older SureFire Mini 7.62 suppressor, the little SBR ran like a top with both supersonic and subsonic loads. The Mini 7.62 is the older version of the SOCOM762-MINI.

At the end of the evaluation, I regretted not getting a BCM rifle sooner. The ergonomics of the Gunfighter stock and grip were perfect, and I’m sold on the new KMR-A rail. I am certainly going to add these accessories to some of the rifles in my safe. For those looking for a durable and comfortable carbine, BCM should be your first stop.

This article was originally published in ‘AR Rifleman’ #189. For information on how to subscribe, please email [email protected]outdoorgroupmags.com or call 1-800-284-5668. 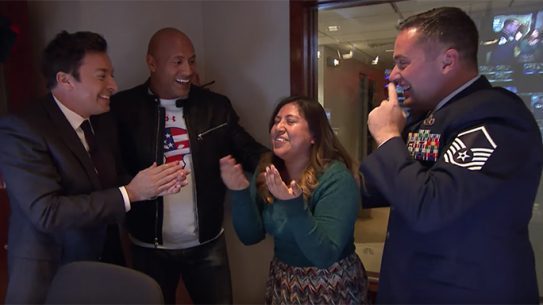 Jimmy Fallon and Dwayne 'The Rock' Johnson team up to surprise a show staffer...