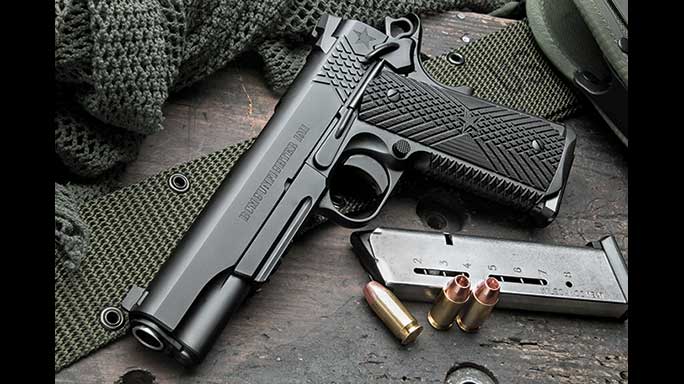 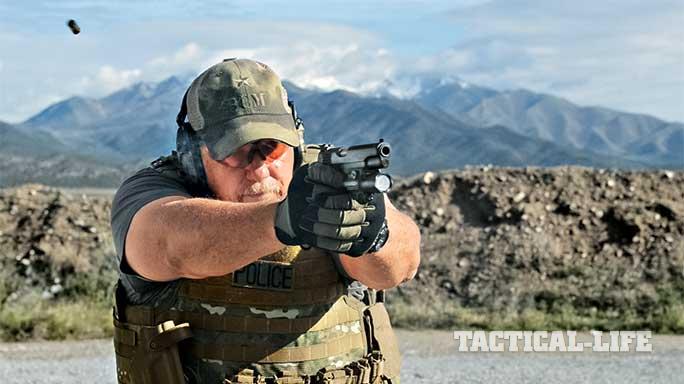 2 of 6
BCMGUNFIGHTER 1911
The pistol is hand-fitted for optimum accuracy and reliability on the range. 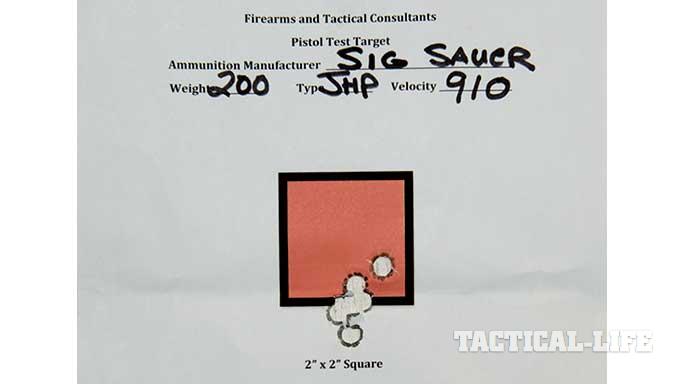 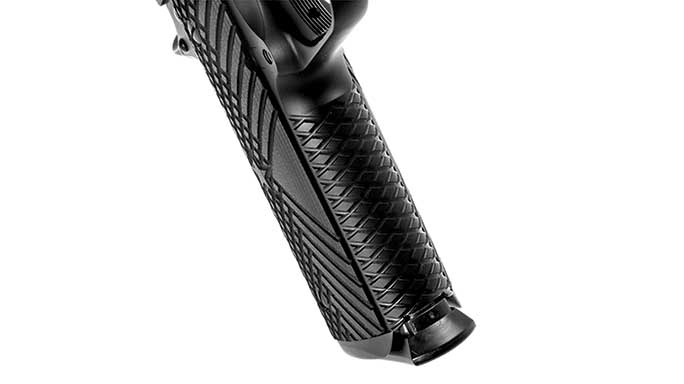 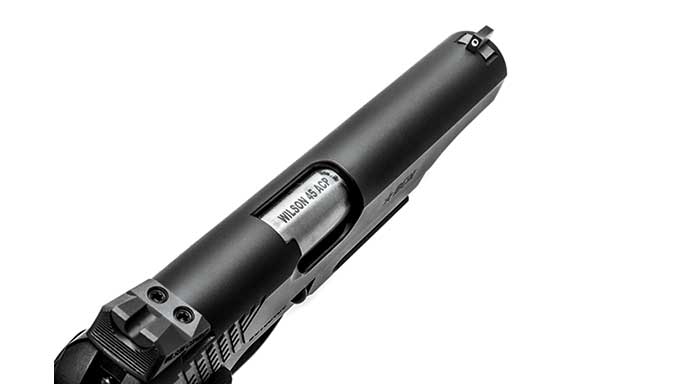 5 of 6
BCMGUNFIGHTER 1911
The tritium front sight is easy to pick up in low-light situations. 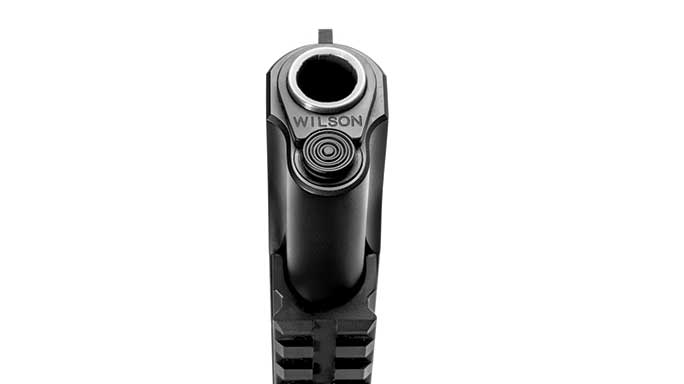 6 of 6
BCMGUNFIGHTER 1911
The match-grade barrel is hand-fitted for precision. 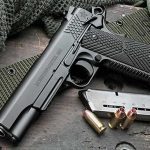 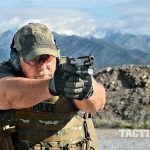 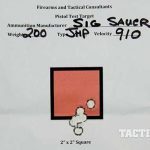 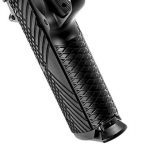 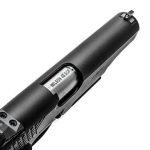 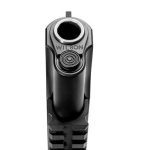 Ask many professionals who carry AR rifles which are the “best” and Bravo Company Manufacturing (BCM) will often be the answer. BCM has developed a strong following among working professionals who need a solid and reliable AR-style rifle. Built for use under extreme conditions, BCM’s rifles, uppers and accessories often lead the tactical pack. Always focused on strength and reliability without sacrificing weight, BCM is a premier supplier of ARs, uppers and the parts that make them up. When the company decided to build a 1911 fighting pistol, the expectations were high, and BCM has come through with flying colors.

Anyone with experience with the 1911 platform recognizes it is not a system that “suffers fools.” Unlike many weapons, building one that meets the high standards of BCM is anything but easy. Doing so on a larger scale requires a significant commitment in machining, parts and the trained professionals who build them. As prolific as they have become, truly battle-ready 1911 pistols are generally the purview of specialized builders with decades of experience. The search for a builder that meets the BCM standards brought the company to Wilson Combat, one of the premier builders of 1911 pistols.

Wilson Combat is one of the few preeminent 1911 builders in the world. Its pistols are renowned for accuracy and the ability to function in the harshest conditions—all BCM requirements. Wilson Combat’s premier gunsmiths have been hand building and tuning 1911 pistols for decades. The company’s ability to build pistols to exact specifications made it a perfect choice to handle manufacturing the new .45 ACP BCMGUNFIGHTER 1911 build.

Wilson Combat is offering this pistol in a limited run with two choices in build specifications. You can have the same pistol with either a single-sided or an ambidextrous safety. That’s it. Both are built by hand, one at a time, by expert gunsmiths at Wilson Combat using a custom serial number. Bravo Company’s trademark star along with its logo sit on the slide. Forged carbon-steel receivers and slides are used along with tool-steel internals and parts.

The railed lower allows for the attachment of lights and other accessories. It contains a solid, crisp Series 70 trigger weighing between 3.5 and 3.75 pounds. The pistol’s X-patterned frontstrap and mainspring housing allow for a solid grip. Wilson Combat’s Bullet Proof high-ride beavertail grip safety ensures a high grip to tame recoil and allows for fast follow-up shots.

Checkering on the slightly oversized magazine release makes for reliable reloads. G10 X-TAC grips featuring the BCM star in the center keep the pistol in place no matter the environmental conditions. The pistol’s edges are well “melted” and meshed, making for a smooth draw and proper concealment. A mag well is mated to the frame for fast magazine swaps, and it fit the Wilson Combat Elite Tactical eight-round magazines that came with the pistol perfectly.

Sitting inside the steel slide is a 5-inch, match-grade, stainless steel barrel that’s hand fit and perfectly mated to the bushing. X-TAC serrations sit at the rear for proper use during reloads or press checks. Sitting on top are Wilson Combat’s Battlesights, which include a tritium insert for the front sight. Each pistol is shipped with a test target, a Wilson Combat custom case and three Elite Tactical magazines.

Given the BCMGUNFIGHTER 1911’s all-around application potential in the real world, it was tested both as a tactical pistol using typical deployment gear and from one of my outside-the-waistband (OWB) concealment rigs. During testing with my Safariland SLS Tactical holster, I also used a SureFire X400 light/laser combination unit. For those looking for 500 lumens of white light along with a bright and rugged green laser, this unit is worth a look. Proven reliable in most any condition, it mounts easily and works with several holsters.

Off-duty or concealed-carry testing consisted of my JM Custom Kydex pancake holster for railed 1911 pistols along with a simple double-magazine pouch. Often used during training with the police department, I’ve used this while attending many schools, and it is my go-to rig for OWB carry with 1911 pistols featuring Picatinny rails.

Having tested numerous Wilson Combat pistols, as well as witnessed the com­pany’s testers in action firsthand, the accuracy for this pistol was not really in question. Every one of the company’s pistols I’ve tested previously has far exceeded my own shooting abilities, with groups under 2 inches and often closer to the 1-inch guarantee. Every 25-yard group was under 2 inches, and most were closer to 1.5 inches.

My best group was accomplished using Sig Sauer Elite Performance 200-grain jacketed hollow points (JHP). While all of the ammunition tested accurately, the 200-grain bullets were often the most accurate when fired from sandbags on a bench. With groups measuring a tad over an inch, that is about as well as I can shoot. Simply put, this pistol is as accurate as a 1911 gets while maintaining the required reliability under real-world conditions. Short of a custom-built target pistol and match-grade ammunition, it just does not get any better than this.

Pistols used for concealed carry or any professional application need to work with a wide variety of ammunition. I tested several common carry rounds during this evaluation and no malfunctions occurred. Firing both slowly and as fast as the trigger can be manipulated, the BCMGUNFIGHTER 1911 just kept kicking out the brass. While accuracy was best with the Sig Sauer Elite Performance, the Federal HST Tactical 230-grain load provided the most consistent ejection patterns and the smoothest operation during testing.

Operation was reliable with everything I put through this 1911, including some very old and dirty Remington UMC 230-grain ball ammo. For practice ammunition, the Federal American Eagle 230-grain full metal jacket (FMJ) was excellent, although it worked with HPR’s HyperClean TMJ, Speer’s aluminum-cased load and Hornady Max Steel which uses steel cases. Over the course of the day, the pistol was lubed up occasionally but never torn down for cleaning, and it never missed a beat.

Working through a number of transition drills, the BCMGUNFIGHTER 1911 fit nicely in the tactical holster and presented quickly. Reloads were accomplished using several common methods, including the typical “slingshot” technique. The pistol also has a fitted steel slide stop that worked perfectly during testing. Using the hook on the rear sight, reloads were completed using my holster on my vest, my belt during concealed carry and on a couple of walls and barricades. After testing the pistol in as many conditions as possible, the BCMGUNFIGHTER 1911 pistol lived up to its name with ease. I would not hesitate a second to take this pistol into work of any kind or carry it for self-defense.

None of my inside-the-waistband (IWB) concealed-carry 1911 holsters facilitate a rail, so carry was restricted to OWB. After carrying it for a day as well as during practice on the range, I found that it was smooth on the draw and did not print. While wearing a loose-hanging sweatshirt and a similar polo shirt, it never snagged on the draw or while returning to the holster. Throwing on a lightweight jacket resulted in the same smooth and accurate drawstrokes on target with no snags.

In drawing the pistol, the trigger was very predictable and controllable. The take-up was noticeable, allowing me to draw to target without pressing through if necessary. If immediate action was required, it allowed me to get on target quickly while applying consistent accuracy. Even when I added in movement to the process, the pistol remained controllable and accurate. The safety operated crisply and with proper tension, making inadvertent activation unlikely. No matter how this pistol was applied during training, it put rounds where it was aimed under complete control.

Having tested numerous Wilson Combat pistols previously, the BCMGUNFIGHTER 1911 performed pretty much as expected, which is to say without any flaws. Built to BCM’s specifications, it is very close to my favorite build for a combat 1911 pistol. The X-TAC pattern is a happy medium between solid adhesion in the grip and overly aggressive checkering. These grips lock the shooter’s hands in place while wearing gloves, even wet ones. At the same time, the grip texturing does not print when concealed, snag on clothing or tear your hands up during long range days.

Every single-stack, carry 1911 in my inventory uses a mag well; it’s just faster and allows for more positive operation. Although fiber optic seems all the rage, a solid steel front sight with a tritium insert is my preference. Always there, it also meets a number of agency policies that require tritium inserts. This sight, however, is perfectly blended into the slide. Black rear sights are quickly becoming the favorite for just about everyone now, keeping dots limited to the one on the front sight. My only addition would be the ambidextrous safety, but that is just a personal preference.

If you are looking for a 1911 designed to run side by side with your BCM rifle, this is exactly what you need. 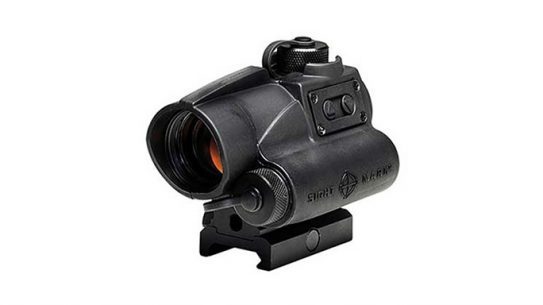