BE YOUR OWN COMBAT MEDIC

by Richard Johnson
in Uncategorized
0

0
SHARES
1
VIEWS
Share on FacebookShare on Twitter
The SOFTT-W tourniquet applied above the knee during a training exercise.

If you were shot, could you save your own life? Just because you have a life-threatening injury doesn’t mean anyone is going to scoop you up and carry you to the hospital. If you are in a position where EMS and other officers cannot get to you, you are on your own until a proper rescue can be organized. Surviving long enough to be rescued depends largely on you.

You must quickly assess your condition, prioritize your injuries and begin treating the most serious wounds first. Blood loss will typically be your largest concern. 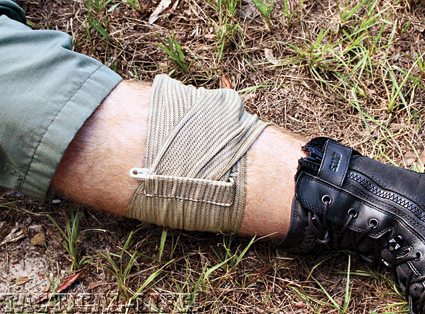 A proven method for stopping the bleeding—an Israeli bandage.

Extremity Wounds
Extremity bleeding is the leading cause of preventable combat death according to U.S. military research. Being shot in the leg or arm is a deadly serious situation, but it is survivable if treated quickly.

Without immediate medical attention, the best choice for controlling massive or rapid bleeding is the application of a tourniquet. Many first aid classes teach that the use of tourniquets is to be avoided. However, for officers who have been shot, this is not necessarily the best advice. A tourniquet can rapidly control massive bleeding where other techniques would be ineffective. If an officer who has been shot is not able to safely evacuate, he or she can bleed to death waiting for rescue. 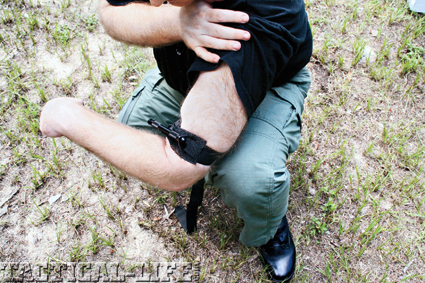 The easy-to-work SOFTT-W tourniquet can be used for any extremity wound.

Current research indicates that a temporary tourniquet applied for two hours or less is not likely to cause permanent damage. While there is always some risk to any procedure, most would agree that the risk of additional limb injury from the tourniquet is far less than the risk of death from blood loss.