1
SHARES
110
VIEWS
Share on FacebookShare on Twitter
Perfect for devouring massive amounts of .22 LR ammo, the Razorback upper receiver is based on the 1919 Browning belt-fed Machine Gun

Military-style rifles chambered in .22 LR are a growing segment of the firearms market. There are magazine-fed rimfire versions of the M16, AK-47, MP5, HK416, Sig 556 and more. However, for those who want to fire a small-caliber version of a belt-fed machinegun, there is only option—Lakeside Machine of Horseshoe Bend, AR.

Lakeside Machine is owned and managed by Eric Graetz, who founded the company in 1997 after buying the rights to produce the Tippman miniature machine guns previously owned by F.J. Vollmer & Co. The Tippman miniatures are fully functional ¼-scale versions of the legendary 1919 Browning .30 caliber and .50 caliber machine guns. Eric is a collector of Tippman firearms and an experienced Class 3 firearms enthusiast. Lakeside Machine’s first models were the belt-fed LM-7 AR-15 upper receiver, followed by the Vindicator rifle in 2004. 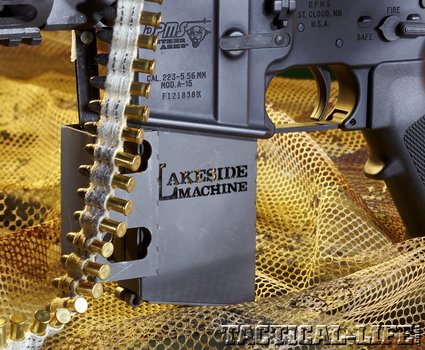 The Razorback works best with 40-grain round nose bullets. Cartridges must be carefully loaded to the correct depth in the belt

The Razorback was introduced in 2009. It is a .22 LR upper receiver that will work with either a semi-automatic AR-15, or with a few additional parts, a select-fire M16 lower receiver. With the feed box installed and a sling over your shoulder, you can’t help but think of yourself as a SAW gunner! 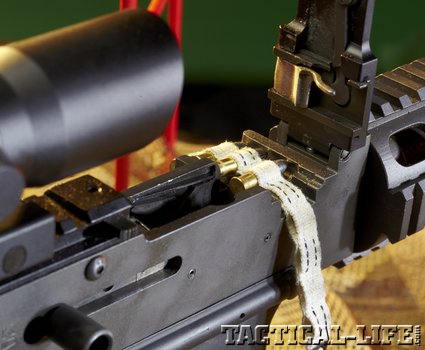 Feeding is from the left, while the initial round in the belt can be loaded with the top cover either open or closed