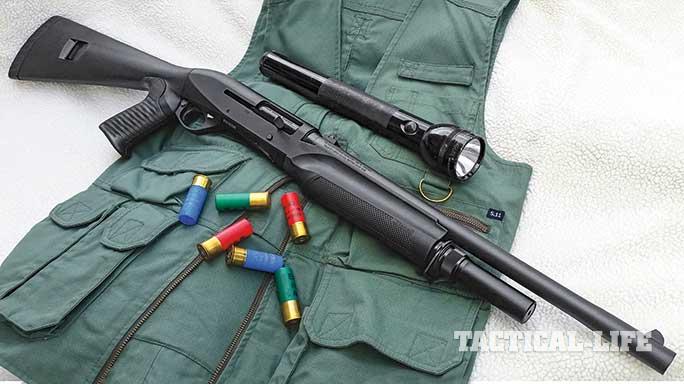 1 of 10
Benelli M2 Entry
As the name implies, the Benelli M2 Entry was designed for tactical teams that need the power and speed of a reliable, 12-gauge, semi-auto shotgun. 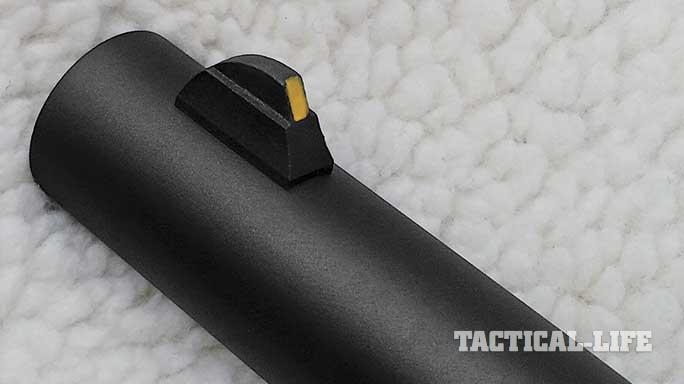 2 of 10
Benelli M2 Entry
The shotgun comes with low-profile rifle sights, and the author painted the front sight yellow. 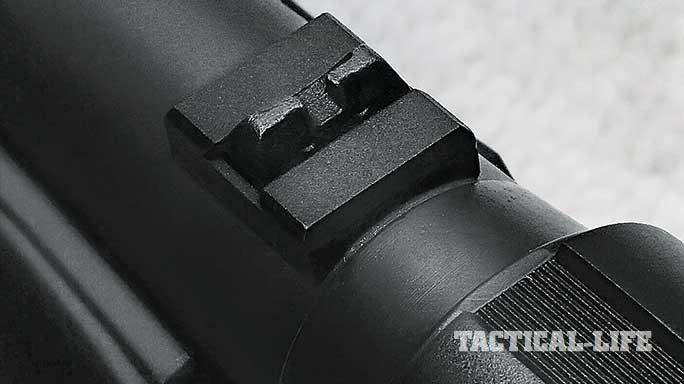 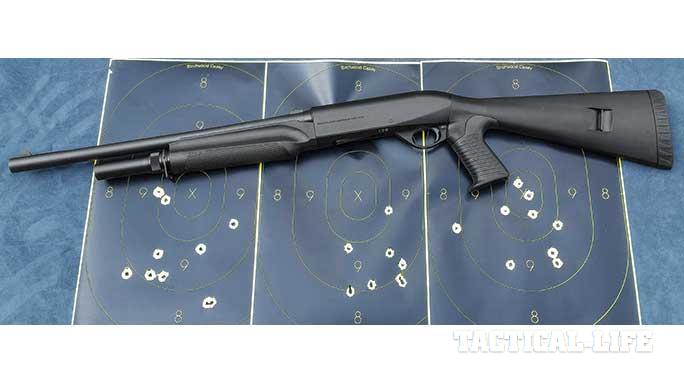 4 of 10
Benelli M2 Entry
The Benelli M2 Entry created these patterns at 10 yards with 00 buckshot, proving its room- and hallway-clearing capabilities. 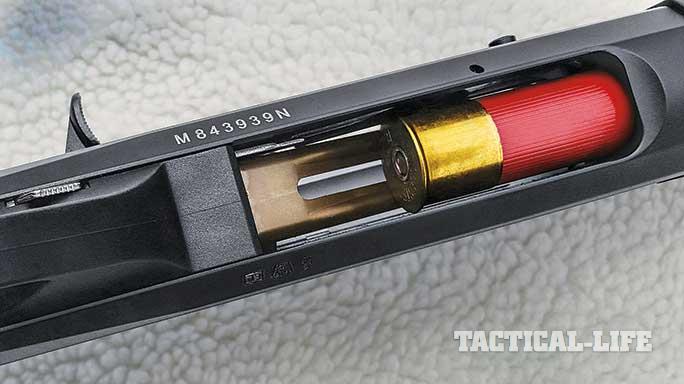 5 of 10
Benelli M2 Entry
The Benelli feeds both 2¾- and 3-inch magnum shells from its five-round magazine tube. 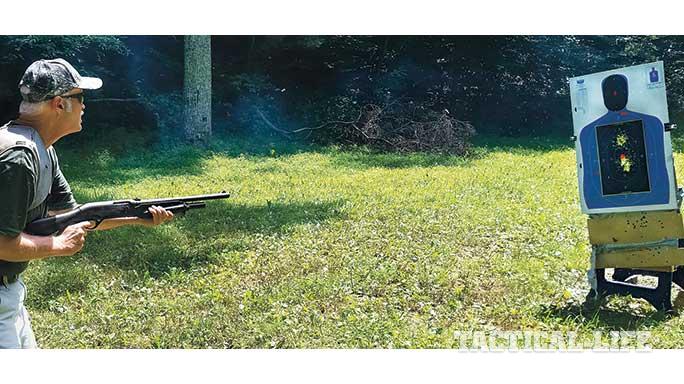 6 of 10
Benelli M2 Entry
In the field, the inertia-driven M2 Entry ran flawlessly with all of the test slugs and buckshot, even when shooting from the hip at a target set 5 yards away. 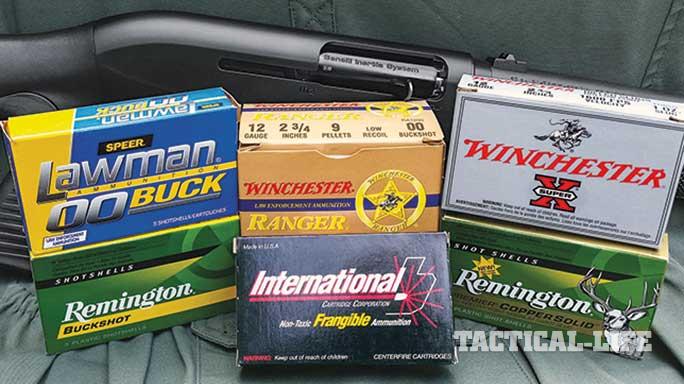 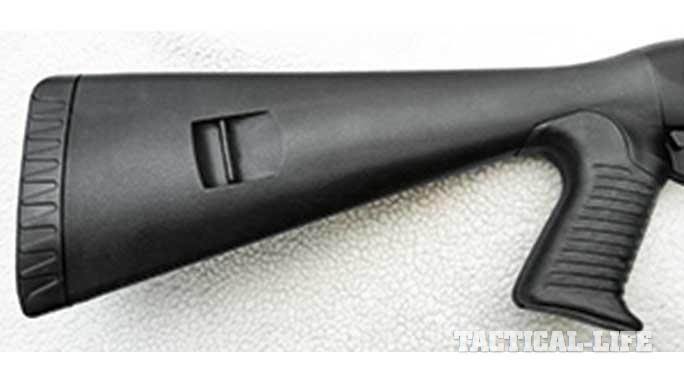 8 of 10
Benelli M2 Entry
The stock features sling-attachment on both sides and a rubber buttpad. 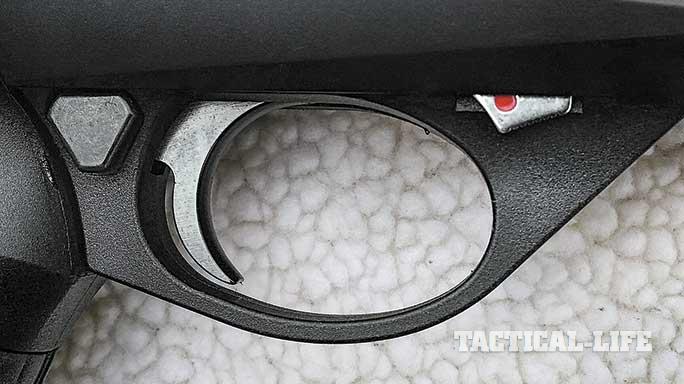 9 of 10
Benelli M2 Entry
The shell drop lever is located just in front of the trigger. 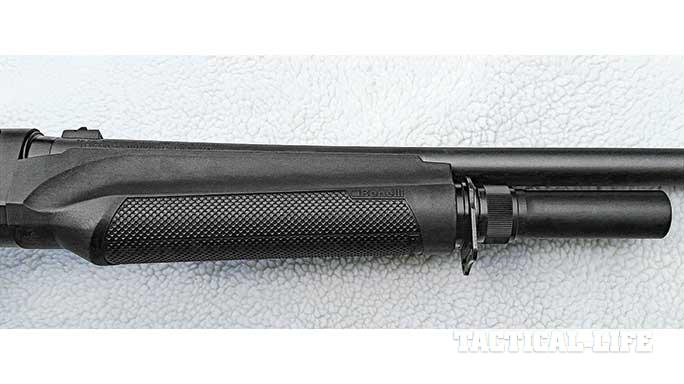 10 of 10
Benelli M2 Entry
The M2 Entry’s synthetic forend is shaped and textured for a positive hold. Also note the sling-attachment point on the extended magazine tube. 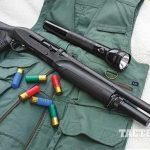 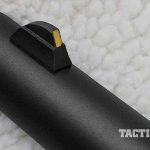 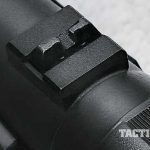 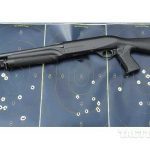 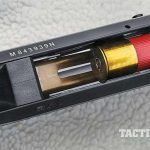 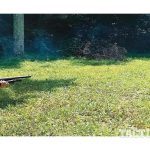 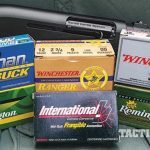 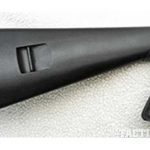 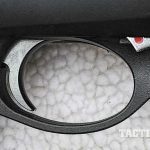 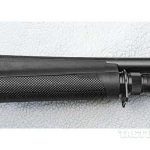 Since the early days of firearms history, one of the most effective guns for anti-personnel use has been the shotgun. This usually smoothbore weapon has the ability to fire multiple projectiles with one shot and, unlike a rifle, doesn’t require precise aim when using ammunition like 00 buckshot. Shotguns have been used for military, law enforcement and civilian self-defense in the United States for decades. In the Old West, 10- and 12-gauge double guns were favorites among lawmen and outlaws; then came lever-action, pump-action and semi-automatic shotguns. Police officers today mostly use pump and semi-automatic shotguns, while the armed citizen may have almost any kind of scattergun stowed away for home defense.

At a recent trade show, a simple-looking tactical shotgun caught my eye at the Benelli booth. It didn’t have a lot of “bells and whistles” attached to it—just the basic necessities. I quickly learned that this semi-auto was designated the Benelli M2 Entry, which made sense to me because it wasn’t encumbered with accessory rails or gadgetry, yet its low-profile, rifle-type sights looked effective and robust. The gun seemed like it would be fast handling, easy to operate and able to take the abuse dished out by a SWAT entry team. It wasn’t long before I had a sample in my hands for testing.

The shotgun came with a rather thick owner’s manual (in five languages), a bottle of Ben Oil lubricant, two modified and full chokes, and a tool for removing said choke tubes. Taking the shotgun from the box, I looked it over muzzle to butt. The entire shotgun is matte black except for the shell carrier at the bottom of the receiver, which appears to have a hard chrome finish. The buttstock and forend are synthetic; the forend has molded-in checkering and is dished out at the front and rear for a more secure hold. Just ahead of the forend is a sling-attachment point on the magazine tube. The buttstock has a true pistol grip with serrated rubber overmolding. The stock also features a rubber buttpad at the rear and sling-attachment points on both sides.

My test gun came with an 18.5-inch barrel with an improved cylinder choke screwed into the muzzle. The round barrel narrows toward the muzzle until it swells slightly where the choke tube is located. The front sight is a 0.13-inch-wide blade. The rear of the sight is left black, but I filled it in with yellow fingernail polish to speed up targeting. Just in front the receiver, the rear sight is dovetailed into a square base on the barrel. Users can drift it in the dovetail to adjust for windage.

Just below the barrel is a ¾-length magazine tube made from aluminum alloy, which gives the Benelli M2 Entry a capacity of 5+1 rounds. The M2 Entry will accept either 2¾- or 3-inch magnum shotshells. The shotgun’s overall length is just 39.75 inches, and its steel, aluminum and synthetic construction helps keep its weight down to just 6.7 pounds.

Also made of aluminum alloy, the receiver has a grooved channel on top to reduce glare. A somewhat shield-shaped indentation at the rear of this channel helps the eyes quickly focus on the sights. Overall, the receiver is uncluttered; the charging handle projects from the right side, and a bolt release button is located just below it. A single pin secures the trigger group, which is housed in a polymer triggerguard assembly.

The trigger has a smooth face and is about 0.25 inches wide. My test shotgun’s trigger had a pull weight between 6 and 7 pounds with just a touch of creep. Just forward of the trigger, where the triggerguard and receiver meet, is a shotshell drop lever, which is silver-colored with a red dot. You use this lever if the bolt fails to engage after being pulled rearward to load a shell in the chamber. Behind the trigger on the right side is a large, triangular-shaped crossbolt safety.

The heart of the M2 is Benelli’s inertia-driven system, which has been around for almost 50 years and provides the utmost reliability. Recoil-driven operation like this provides simplicity and functionality without the need for gas ports or adjustments of any kind. The barrel is fixed, and spring pressure delays the opening of the bolt after firing; then, once the shot leaves the barrel, the rotating breech bolt unlocks from the barrel, moving rearward under residual pressure, permitting shell extraction and reloading. This action has only three major parts—the bolt body, rotating bolt head and inertia spring, which is located in the buttstock. By using only kinetic energy to operate the action, the M2 Entry can use any kind of shell, from light target loads to 3-inch magnum ammo. The action’s simple construction and clean operation make it both strong and lightweight.

As a lifelong user of double-barrel and pump-action shotguns, I had to pay particular attention to the loading procedure for the M2. So if you’re like me, read the manual! Of course, the first step is to make sure the shotgun is on “safe,” and the internal hammer needs to be in the cocked position so the carrier latch can retain the loaded shells. Be sure to close the bolt by using the bolt release button. Now the shells can be loaded through the bottom of the receiver, pushing each shell forward into the magazine. According to the manual, when you are ready to load a shell into the chamber, open the bolt using the lever, then insert a shell in through the ejection port. The shell will be atop the carrier, and releasing the lever will allow the bolt to push the shell into the chamber and stop in the closed position. You now have a round in the chamber, the weapon is on “safe” and the magazine is full.

This is all well and good for the range, hunting or in certain home-defense situations, but what if you want to load from a full magazine with the chamber empty, as a cop might have to do with the shotgun stored in their patrol vehicle? First, the M2 will not load from the magazine with the hammer in the cocked position and the safety on. Knowing the chamber to be empty, you may disengage the safety and push the shell drop lever. A shell will automatically feed onto the carrier; pulling fully rearward on the charging handle will feed the shell into the chamber. The safety can be applied before this operation if needed or not if the user is immediately ready to shoot. The shell that is in the chamber can be ejected and replaced with a different shell as long as the trigger is not pulled; another shell will not feed into the chamber from the magazine. This takes a little getting used to, so practice, practice, practice!.

My first task at the range was seeing what patterns I’d get with the 00 buckshot loads at 10 yards. I will note that the smallest and most “centered” pattern came with the Winchester Ranger shells. My point of aim (POA) for all the buckshot shells was the X ring of a B-27 target, and five of the nine pellets were in the X and 10 rings. The other shells tended to hit 4 to 5 inches below the POA.

Next, I tested the Benelli M2 Entry with slugs using its rifle sights, from the bench, over a sandbag rest. The target was an IPSC-style practice target with rectangular red aiming points. The center of the red A-zone in the thorax area was my POA, and the Winchester slugs were the clear winner for producing the most centered and tightest five-shot groups. ICC came next, then Remington, which appeared to have some key-holing. And I’ll readily admit that I finally had to put on a shoulder protector, as shooting a number of these slug loads out of a 6.7-pound shotgun quickly becomes painful.

As a practical exercise, I loaded the Benelli M2 Entry shotgun with Winchester Ranger 00 buckshot. Starting 5 yards from a B-27 silhouette target and the shotgun held in a low-ready position with the safety on, upon a signal, I lifted the shotgun into a hip-shooting stance, deactivated the safety and fired two shells into the target’s center-mass. I then moved 5 yards back, keeping the threat in sight, and fired two more shells—one shot was to the head. Moving back another 5 yards, I fired twice more. The target was pretty shot up at this point. As the distance increased, the pellets spread out, but they all stayed in the black except two of the pellets from the headshot, which were still darn close. Only the Incredible Hulk could have survived this barrage!

I brought along a collection of loose low-brass target and game shells to the range, and I stuffed these into the Benelli M2 Entry and fired them off as rapidly as possible to test the shotgun’s functionality. As had been the case earlier, there wasn’t a single hiccup—the shotgun ran flawlessly. I was very pleased with the M2 Entry’s overall performance. It’s lightweight, rugged and really easy to operate after some practice. I think anyone could do a lot worse than having this fine scattergun stored in their bedroom or nestled in the shotgun rack of their squad car.

This article was originally published in the October/November 2016 issue of ‘Guns & Weapons For Law Enforcement’. For information on how to subscribe, please email [email protected]outdoorgroupmags.com or call 1-800-284-5668. 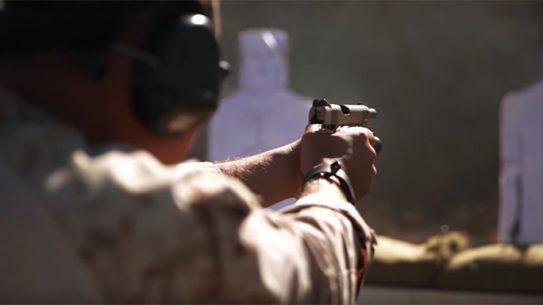 Transitioning From Rifle To Pistol With the 1st Marine Division

Pistol-to-rifle transition is a vital aspect of training, as Marines with Company B, 1st...