For well over 20 years, I have been a shotgun proponent for personal protection and LE applications. Even after spending plenty of time on rifles, submachine guns and other systems, I always had a shotgun to deploy. I still believe the shotgun is the most versatile patrol weapon in the arsenal. I use it on warrant services, SWAT operations and it is the first long gun accessible to me in my car. When a properly trained individual is carrying a shotgun, it has few weak points in any of those environments. 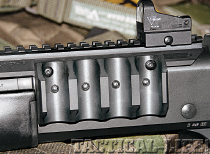 There has been a long and arduous argument as to which type of shotgun is better (auto or pump). It’s really a matter of personal preference. I have always come back to one favorite shotgun, the Benelli Super 90 after fielding just about every variety of auto-loading or pump shotgun including short-barreled versions. With a shortened LOP (length-of-pull) it has been the best shotgun to operate and field.

In 1990, I picked up my first Benelli M1 Super 90. It had ghost ring sights and a standard stock that I eventually paid to have shortened. Over the years we switched over to the M1 Super 90 variations with pistol grip stocks, standard and short barrels, and just about every accessory ever produced.

Eventually, it was best to become a minimalist with light setup, the smallest possible side saddle, a small red-dot sight, a standard barrel and a shortened pistol-grip stock. When the M2 Super 90 came out, I sold my M1 and made the move. Although the M2 is an enjoyable shotgun, I always wanted to make the jump to the M4 Super 90.

A few months back, I took the leap and ordered a Benelli M4, figuring now was the time with the possibility of future gun bans. After a 90-day wait, it arrived and I put the gun through its paces. After using a Super 90 of one sort or another for over 20 years, I was not going to be easily impressed. I had read all the reviews by Benelli types who had made the jump and figured they were just biased. After spending some time on the range, I was impressed. It has become my favorite long gun all over again.

Sidearmor Rail System Details
The Benelli M4 is quite a bit different to configure than the M1 or M2 and that made attaching accessories a bit of a challenge. Being pretty picky about what I attach to a $1500 shotgun, I was not going to simply screw a couple of rails on the fore-stock panels. Wanting something a bit more permanent, something that was designed for this system, homework was done. Some of the same side saddle choices were available for this system as my M2, but it was best to work with something that would do everything. After lots of research and looking at pictures, the Sidearmor M4/1014 Shotgun Rail Interface presented itself. Contacting Sidearmor, I asked to give one a try.

The standard package with the side saddle addition seemed best for my needs. I liked that it held just four rounds and since it was removable I figured could try it and see. Right out of the box, the engineering and effort that went into this product were quite noticeable. This was not just a rail, it was a work of art! It was easy to recognize the new computerized machines of the day pump out some precise work, this was still a fine example of what can be done. It was one very nice looking piece of kit.

Playing with the various rails, everything fit together very tightly. It was very clear that some significant effort went into making the fit of the pieces precise. The rail holes lined up precisely and were held together with screws that matched the finish. Several different accessories were mounted on the various rails and all mounted right up. Many times rail cuts are less than precise especially on the bargain basement stuff. I have taken a file to a rail on more than one occasion to get rings, sights or other things to fit the “standard” rail. That was not the case here. It was right on.

About The Installation
Everything needed was contained in the box. There was an Allen wrench to fit each of the various screw sizes, Loctite and very clear instructions with pictures. The instructions were easy to follow and things went together exactly as described. It took a total of 10 minutes, taking my time, to properly install the rail. One of the first things that caught my attention was that all the holes lined up on the receiver. After having installed countless rails on rifles and shotguns this was not always the case.

The side saddle bolted up precisely with no movement, something that was consistent throughout the rail. Everything was a precise fit with no movement. That is critical on a shotgun, especially one that gets used as much as mine. If something can work lose, it will. I inserted some rounds in the side saddle and noticed they were really tight.

It seemed a bit too tight a first. The side saddle uses an ingenious ball and detent system, which means nothing will wear out or go “soft” as experience has proven on other rails. You do not have to worry about your rounds falling out. Working the rounds in and out a couple of times. They were properly tensioned after only a few times. By the time I got to the range it was about perfect for me. All in all the system installed with ease, and was a precise and snug fit.

Range Time
It was easy to install the preferred setup on the shotgun and took it to the range, adding a SureFire Scout Light and Trijicon RMR MS03 with an 8-MOA (minute of angle) red dot. Another item that’s a necessity was installed, a 3 Gun Gear Slide Lock Two Pack. This is a two-round carrier allowing the user to load on an open breach or slide lock. It is very fast for slug select, especially on the Benelli.

Because of my shorter arms, I use the portion of the stock panels closest to the receiver and installing the two-round pack in the normal fashion interferes with my grip. Using the system’s open-rail attachment, it sat at just the right height so to access it under stress without interfering with my grip.

Three hours was spent on the range with the new system in place. It was put through every test and practice drill I knew and the system never missed a beat. It was evident early on that the sights were dead on, so the rail was clearly the same height as the stock, or so close as not to matter. Nothing shook loose – I used the Loctite – and even after a ton of swapping rounds the side saddle still held those rounds snug. Even after intentionally trying to dump them out of the saddle, they would not fall out and yet they were easy to remove during the drills.

The rail operated as advertised when it came time to clean. I simply backed the side screw off three turns and the barrel came off without a hitch. To reinstall, I simply pushed the spring-loaded mount and it slid back into place. There was no interference with the side panels, and I barely noticed any difference in the assembly process.

Final Notes
The rail was perfect for my needs. It only weighs 15.7 ounces with the side saddle, mounted precisely and firmly and did so without interfering with the gas system or the stock panels. It allowed for some creative mounting of the two-round pack and allowed the use of a side saddle. The side saddle is light weight as well and holds the rounds firmly, allowing for fast reloads.

It had no adverse effects on the gun’s operation or its fit. This is simply one incredibly, well-built rail system. A lot of forethought went into its design. The Sidearmor rep was easy to deal with and every response was prompt and pleasant.

Retail price on the system without the side saddle is $329, the side saddle is another $55. That puts the as-tested retail price at $384, though LE officers receive a 15 percent discount. This is not cheap, nor is it exorbitant for the level of quality exhibited. Many of the top-name rail systems for AR-15 systems are in the $300 range.

Also consider that there really is nothing else like this rail out there. There are certainly cheaper alternatives, but no one system does what the Sidearmor does for an M4 Super 90. It is a specialty product for a specialty shotgun and is not for everyone for sure. But I have never been one to scrimp, especially on a gun for which I paid almost $1500.

The rail interface is well designed, rugged, versatile, and specifically built for the M4. It is the best-engineered accessory for a Benelli shotgun I have every used.