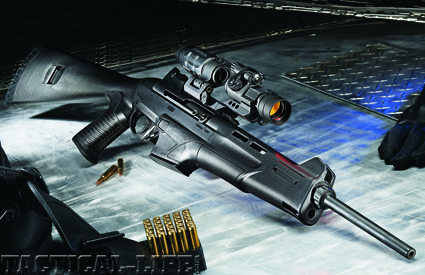 Benelli USA made their first big mark on the US law enforcement and military community when they introduced the M1 Super 90 shotgun. The M1’s inertia operating system not only proved to be reliable but it cycled faster than any of its competitors. This made it a favorite with both tactical teams and competitors. Several years later, Benelli brought out the M4 shotgun that was designed around the ARGO (auto regulated gas operating) system. The ARGO system uses two stainless steel pistons that are located in front of the chamber. The pistons are self-cleaning and interact with the rotating bolt. The result is a clean and reliable system that has been proven over time. The M4 was adopted by the US military under the Joint Service Combat Shotgun contract in 1999. Since that time, over 30,000 units have been delivered to the US Marines. 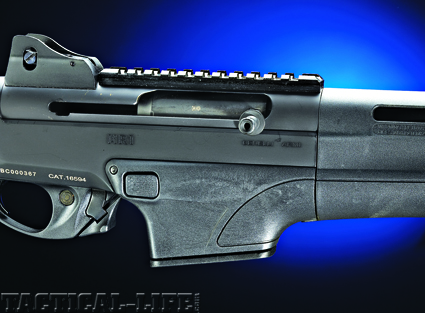 Benelli’s MR1 is designed to accept AR15/M16  magazines. It is shown with a flush-fitting unit.

In 2009, Benelli entered the law enforcement carbine market with the MR1 tactical carbine. The MR1 is a descendant of the R1 sporting rifle that has been around for several years in calibers suited for big game hunting. The MR1 is very modern in appearance with sleek lines that reflect its Benelli heritage. The MR1 is 37.1 inches in length, and weighs 7.9 pounds. The MR1 has the same ergonomic pistol grip stock that is found on the M4 and other Benelli tactical products. The rubber buttpad and pistol grip were initially designed to reduce recoil in the larger caliber R1 and M4. While recoil is not an issue with the .223 round, the texture of both aids in weapon security during adverse operating conditions.

The aluminum receiver is the same as the R1’s with the exception of the magazine modifications. Where the R1 feeds from a three or four round, detachable box magazine, the MR1 has been modified to use standard AR15/M16 magazines. The magazine release is an ambidextrous design with a large, recessed, button release located on both sides of the receiver.

The safety is a traditional crossbolt design that is located on the leading edge of the triggerguard. The bolt hold lock/release is a wedge shaped lever that is located on the front of the triggerguard. To lock the bolt open, the release is pressed upward as the bolt is drawn to the rear. To release the bolt, the bolt handle is pulled to the rear, releasing the bolt lock. The bolt is cycled via an extended handle found on most autoloading shotguns. The trigger on my test gun measured an even 5 pounds. While not a crisp match trigger, it was certainly better than many service grade rifles.

The barrel is covered by a one-piece polymer handguard that slips over the muzzle of the barrel and is secured by a barrel nut. Inside the handguard is the heart of the MR1, the ARGO gas system. The stainless steel, self-cleaning piston system operates directly against a three-lug rotating bolt. Gas is fed from a barrel port that is located just forward of the chamber, not at the end of the barrel as in some systems. The result is a gas system that is radically different than its competitors, and particularly different from a traditional direct gas impingement-operated AR15/M16-pattern rifle.