by Stan Trzoniec
in Guns, Rifles
0

0
SHARES
358
VIEWS
Share on FacebookShare on Twitter
Designed for the 21st century hunter without sacrificing traditional looks, the Benelli R1 brings accurate semi-auto firepower to the field with minimum recoil.

Any mention of a semi-automatic on a hunting trip will certainly scare most of the veteran hunters back into their treestands. It seems that in previous years this type of hunting rifle was not very accurate, somewhat unreliable and although some claimed it, recoil was not as soft as the technical people stated in their white-paper reports. 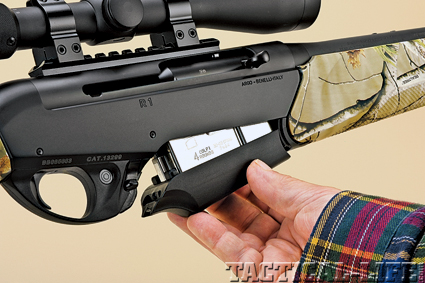 The magazine holds four rounds of .30-06 Springfield ammunition or three rounds of either the .300 Winchester or .338 Winchester Magnums. It easily is installed or removed.

Over the years, things have changed for the better. Semi-autos are seen more and more in the hunting fields due in fact to hammer-forged barrels, a stronger bolt lockup, consistent trigger pulls and more engineering time. I know from experience in shooting both the Browning BAR and the Remington Model 7400, that yes, Virginia, you are going to be impressed with today’s automatic weapons. However, the fact still remains that all guns will malfunction if proper maintenance is not applied. Surely the autoloader is a bit more finicky, but that’s the nature of the beast, especially when more parts are moving around inside the gun as compared to say a pump or lever gun. Finally, if you shoot so much on a big game hunt that you are worried about a few shell casings moving out towards the pucker brush (read handloader), then perhaps you should look at something other than a semi-automatic sporting rifle. 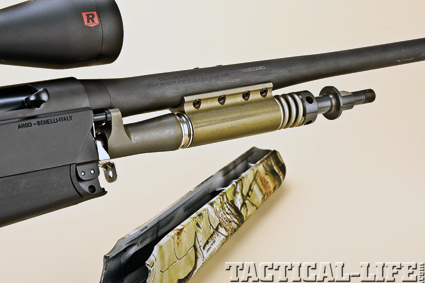 With the forend removed, the complete system is exposed for maintenance. From right to left you have the barrel lock follower, gas collector cylinder followed to the rear by the bolt follower pins that operate the bolt.

New products come and go and it’s refreshing to see something up to date appear on the market within the narrow confines of autoloading weapons. Under this heading, you will find the Benelli gas-operated rifle called the R1—engineered for the serious hunter in mind. To make this all happen, Benelli has chambered the gun in the .30-06 Springfield, .300 Winchester and now in the .338 Winchester Magnum calibers. In addition and along with a whole list of options, this is going to be one viable gun in the field for nimrods and veterans alike. 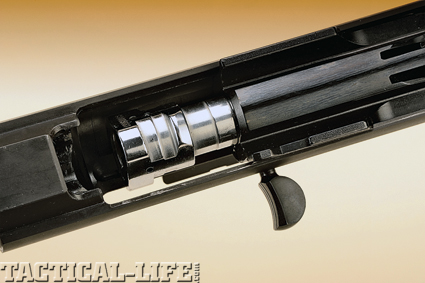 From under the gun, we see how both the bolt and bolt head fit neatly inside the receiver. For maintenance, it is just a simple matter of pulling out the operating lever on the bottom, then sliding the entire bolt out of the back of the receiver.