When the Beretta M9 was officially announced as the Colt 1911A1’s replacement in January, 1985 an outcry arose among generations of veterans who had carried the big .45. Many felt their sons and daughters who were serving or might serve would be doomed by such an inadequate manstopper. The adoption of the M16 had generated similar distress. As with the M9 and its 9x19mm chambering, the M16’s 5.56x45mm round was considered inadequate compared to the M14’s 7.62x51mm round. On the other hand, the 1911 .45 auto had been around for three-quarters of a century, while the U.S. had issued four primary service rifles during that same period. 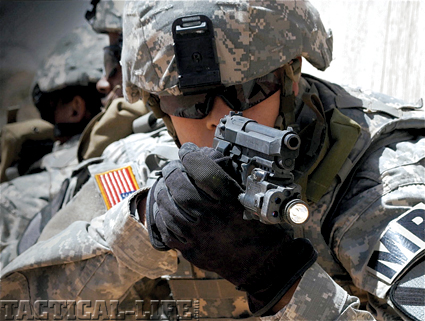 The Beretta 9A1 with light mounted, in use by a U.S. Military Policeman. This version of the M9 has been adopted by the USMC and by special operations units.

Of course, the 1911’s length of service was a primary consideration in its replacement. Those on issue in 1985 had been manufactured in 1945 or earlier and had seen a lot of use. There were other considerations. U.S. allies in NATO used 9x19mm pistols and there was the issue of standardization. Additionally, there were more women serving in the U.S. armed forces, and it was felt a double-action, 9mm pistol would be more user friendly for them. For those whose primary weapon was a pistol, the availability of 45 rounds for the M9, versus 21 for the M1911 with a pistol and two spare mags, was a factor. 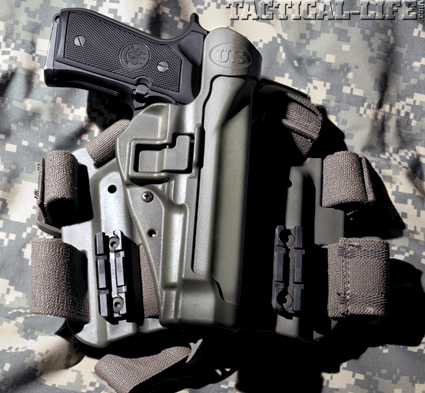 The official holster for the M9 for many years was the Bianchi M-12. Today in the Sandbox, BlackHawk SERPAs worn on the chest or in drop holsters are used.

Once it was decided to seriously consider adopting a 9x19mm-caliber pistol, the Joint Small Arms Planning Commission was formed to test a variety of pistols. Among the tests were exposure to temperatures from -40 degrees F to +140 degrees F, soaking in salt water, burial in mud and snow, and dropping repeatedly on concrete, then firing for functioning. The Beretta Model 92F, which was the pistol submitted for testing, did well on all of the tests and also had a Mean Rounds Before Failure rate of 35,000. Initial trials had been carried out by the Air Force in 1980, resulting in the recommendation to adopt the Beretta 92F. However, the Army ran new trials in 1984, which the Beretta won, hence, announcement of adoption in 1985. However, still more trials—the XM10 competition—were run in 1988, resulting in two finalists, SIG and the Beretta. When the final decision was made Beretta had won, though there were persistent rumors that the SIG entry was actually preferred by evaluators but a deal had been cut with Italy allowing placement of U.S. missiles in return for adopting the Beretta. According to these rumors, Beretta was tipped off to the bid price offered by SACO which was importing SIGs at the time so that Beretta could bid one dollar less. In any case, Beretta got an initial Army order for 315,930 M9 pistols, an order that was increased to 321,260 pistols.