by Gene Gangarosa
in Guns, Handguns
0

In 1903 Pietro Beretta (b.1870-d.1957) took over the family business determined to develop a modern, world-class product line. After importing foreign pistols, chief engineer Tullio Marengoni (b.1881-d.1965) developed original ideas for one of the world’s most successful lines of automatic pistols. Meanwhile, Italy had joined World War I on the Allied side, and Beretta developed many pistols, including the Model 92, as military firearms. Models of 1915, 1917, 1922 and 1923 saw limited service but were mainly important for developing a distinctive Beretta design, notably an open slide exposing the top of the barrel all the way back to the breech face, a feature conducive to reliability and surviving to this day in the Model 92. 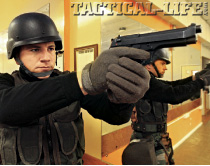 Mussolini’s rise to power as Italian dictator brought a revival of Italy’s armed forces and increased demand for armaments. Beretta scored a phenomenal success with its .380 ACP Model 1934 and Model 1935 in .32 ACP. These rugged and reliable pistols served with Italian forces into the 1980s, over 1.6 million being built. But like other successful manufacturers, Beretta constantly studies worldwide developments to improve its product line. Even as the Italian military bought Model 1934s and 1935s as fast as Beretta could make them, the company anticipated the 9mm cartridge becoming the international standard. In 1938 Beretta experimented with prototypes for it.

After World War Two Beretta resumed this research, in 1951 announcing a single-action 9mm pistol with locked breech, grooved grips and 8-shot magazine inspired by the Walther P38. This Model 951 disappointed at first, its light aluminum frame lacking durability. Once remanufactured in steel in 1955, the Model 951 was adopted by Egypt, Haiti, Iraq, Israel, Nigeria and by the Palestinians. Beretta ultimately made about 100,000 Model 951s, and Egypt and Iraq built copies into the 1990s.