If you have read any of my articles, you already know that I live and work in both the United States and Europe, splitting my time equally between the two. This brings me in contact with European companies that make excellent precision shooting equipment, some of which is seldom seen in the U.S. But this isn’t the case with Bergara.

Bergara has given new meaning to “Made in Spain,” and has recovered the traditional pride found in Spanish gunsmithing. In less than a decade, the company has become one of the top sellers of bolt-action rifles all around the world, including the United States. This is not only because of the super-accurate barrels it produces, but also because of the new B-14 Bergara Match Precision (BMP) line of rifles that is taking the market by storm. These are Spanish rifles designed and built up north in the Basque Country with custom-grade features while still being relatively affordable.

If there is one centerfire action that can be considered the world’s standard, it is the Remington Model 700. So it makes sense that Bergara would select this design for an action to build the B-14 line around. But, steeped in hundreds of years of Basque gun-making tradition, the company’s engineers couldn’t stop themselves from upgrading the Model 700’s design with all those mods that custom rifle-makers are known for—at a fraction of the price. 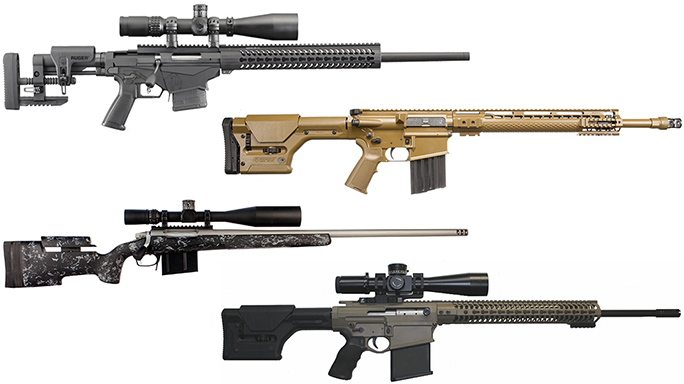 The extractor is one of the weak points of Model 700 actions made by Remington, so Bergara redesigned it on the B-14. Bergara added a sliding plate extractor, even larger and more rugged than the typical SAKO-type extractor used in some custom actions. To assist in feeding and provide a slick, well-oiled “sewing machine feel,” engineers coned the bolt face and breech, and polished the action raceway to a high standard. They also added a side release to allow for better control of the bolt and more versatility in trigger selection.

Bergara’s B-14 rifles come without a scope rail, and for a good reason: No two shooters want the same targeting setup, so you can add whatever you want without paying for a rail you might remove in the first place. You can install a two-piece detachable base, any Picatinny rail, the more advanced STANAG 4694 rail with or without an MOA offset, or even a full-length model, such as one from ERA-TAC. The choice is yours, and you won’t need to scrap an included rail, as is commonly done with other builds. For this test, I selected an ERA-TAC rail with no MOA offset, as the Schmidt & Bender PM II scope that I installed offers plenty of internal elevation for a 20-inch-barreled .308 Winchester/7.62mm NATO rifle.

I really like Sendero barrel profiles, and the 1-in-10-inch twist rate is perfect for the new, more radical bullets we have today. It shows great attention to detail, as the Bergara engineers selected what they think will be best for shooters in the real world. These are the guys shooting bullets with high ballistic coefficients (BCs) that require twist rates faster than the more common 1-in-12-inch twist.

Even though most police snipers don’t need to shoot out to 1,000 yards and can trade some muzzle velocity for mobility, PRS competition shooters need both the speed and the distance. For some, the barrel might look a tad short on my test rifle, but the 20-inch length is the best all-around choice for a .308. I can’t agree more with Bergara’s choice.

I believe in the 20-inch barrel length so much that I went as far as shooting the 2010 World F-TR 1,000-yard Championship with one, so don’t tell me you can’t shoot far with such a short stick. However, that does not mean I don’t prefer long barrels for long-range applications—but for most shooting under 1,000 yards, 20 inches is just about right for a .308.

That said, it doesn’t matter if you choose the B-14 in .308 Winchester or 6.5 Creedmoor, as they’re both dead-on. They both offer what a precision shooter would ask from a rifle manufactured today. Both are compatible with the newer high-BC bullets, and they’re deadly accurate to boot.

Why A Chassis Rifle?

The BMP is the only chassis- stocked rifle of the B-14 line. You might ask why Bergara needed an aluminum chassis rifle when the company already offers the HMR with a nice aluminum-bedded composite stock. Well, because many shooters prefer a chassis to a composite stock, even acknowledging that most chassis are heavier. But the 7075-T6 aluminum BMP stock weighs only 4.83 pounds, which makes it lighter than most composite stocks, and more desirable.

All of the B-14 rifles share the same barreled action and come with a sub-MOA accuracy guarantee, but the focus is different on each. The HMR is more versatile, serving target shooters, varmint hunters and even some tactical applications. The BMP is oriented towards competition shooters and snipers that want to go all-out and prefer a super-rigid configurable platform.

On the BMP, you can adjust the rifle’s ergonomics without tools to fit the shooter’s position. The recoil pad is adjustable for height and cant. The cheekpiece position and length of pull can be adjusted, too, with easy-to-grab steel knobs that have an internal Allen key socket. This is especially useful in case you need the extra torque, or for loosening it when you have an ultra-strong shooting partner.

The grip of the BMP chassis is compatible with AR-platform grips. The included grip is angled somewhere between vertical and that of a typical AR-15. In fact, I like it so much that I plan to test this grip on my F-Class rifle, which also has an AR-style grip. As a bonus feature, the two action screws are captive and removable with an Allen or T30 Torx wrench, which makes it easier to take care of the rifle in the field.

The chassis has six flush quick-detach (QD) sling mounts and a Harris bipod stud already installed up front. It also has a very interesting feature in that the bottom of the rear buttstock is flat and threaded so you can install a bag rider bar or a rail to add a stable monopod.

Adding to the rifle’s versatility are the Magpul M-LOK slots cut into the forend, which make it easy to add accessories as needed. The Bergara engineering department also drilled and tapped the top of the handguard for a proprietary cradle mount so users can install any thermal or night-vision device. Finally, the B-14 BMP is compatible with AICS magazines, and it comes with one 5-round magazine.

You might think it’s overkill to install a Schmidt & Bender 5-25x56mm PM II on a rifle that costs half as much as the scope, but I try to get the most from every shooting system, and the superb quality of Schmidt & Bender optics don’t feel out of place on this Bergara, both for competition and in sniper use. On a previous test, I struggled to attain the full potential of a B-14 Varmint rifle with a 10X hunting scope, so I wanted a true high-power sniper scope for this test. 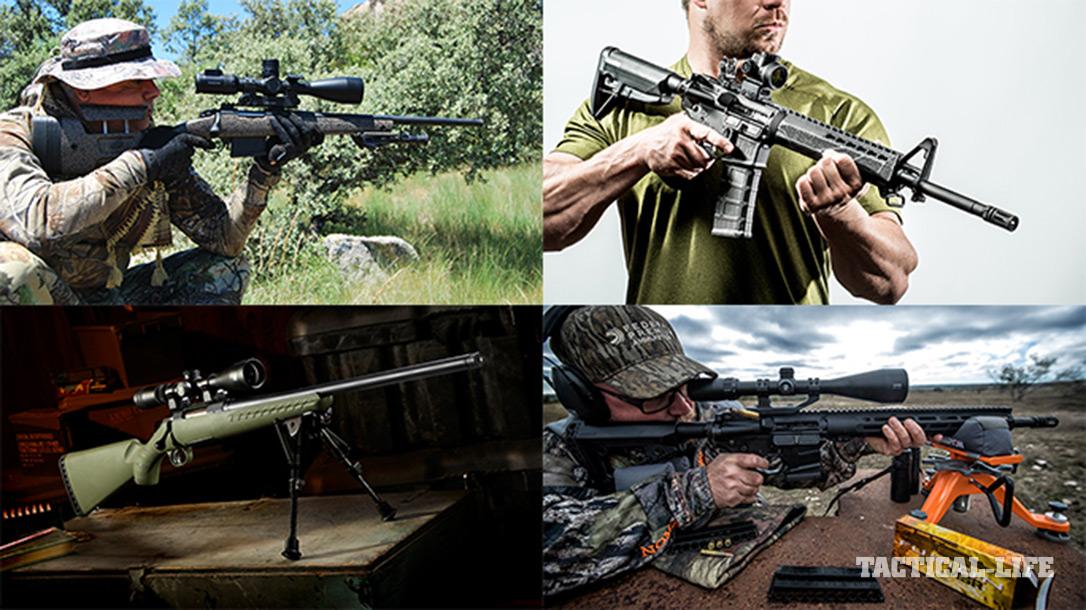 I was expecting a very accurate sniper rifle that could stand its ground against rifles costing twice as much, and that’s what I got. And I would like to mention that the accuracy of the BMP in competition could be enhanced even more by using a custom trigger, such as the TriggerTech unit I used in the B-14 Varmint. But for this test, my goal was to use the pull-adjustable OEM trigger as-is. For police applications, most agencies leave the trigger as it comes from the manufacturer for liability reasons. And the Bergara performance trigger, with a nice 1.9-pound pull and no creep, is a fine trigger.

To be honest, I can’t say that this is the most accurate sniper rifle I’ve ever tested, considering that I have some of the most accurate and expensive rifles available in my safe. But I can testify that this is a sub-MOA rifle that proved to be as just as accurate, or more accurate, than most sniper rifles out there at a fraction of the cost. Of course, group sizes can only tell you so much about a rifle. Sure, the BMP is accurate. Sub-MOA accurate? Definitely, with an average group size of just 0.75 inches for 250 rounds. And beyond all the numbers, the BMP shoots very well and makes you feel comfortable while doing so. You feel connected to it, and it makes the job of hitting the target, no matter how small, an easy one.

If you are not satisfied with just sub-MOA accuracy and want to make tiny, one-hole groups, I am sure that the BMP can do it. Just find the right boxed ammo or the ideal reloads. Personally, I don’t need any more accuracy than the BMP supplies as it is now, and I feel super comfortable shooting it.

I have to say that the Bergara B-14 BMP is a keeper. With an MSRP of $1,699, it might not seem cheap, but it is a bargain in my opinion. It is a superb budget-minded, multi-purpose precision rifle that will give you some awesome time behind it. It is also perfect as a quality secondary or backup precision rifle if you already have a high-dollar model. Just as I thought about the B-14 Varmint rifle, I am sure you will end up using it much more than you originally expected.

Bullet weight measured in grains, velocity in fps by chronograph and accuracy in inches for best three-shot groups at 100 yards.