Most readers know me from my tests of upscale European precision rifles. Due to my work as a sniper instructor and consultant, I deal with some of the world’s best manufacturers, and many are too pricy for the regular hunter, target shooter or even small-city tactical units. But that’s not the case with the Bergara B-14 line of rifles.

Around 11 years ago, the guys from Dikar/BPI Outdoors were already the global muzzleloader leaders with the CVA brand. Then they started making custom centerfire barrels at a plant in Bergara, a Basque Country town in the northern region of Spain. Their first customers were competition shooters, and the results were outstanding. These athletes won many F-Class championships, and the Spanish team even brought home a European championship.

Soon Bergara became well known across the original equipment manufacturer (OEM) markets in the U.S. and abroad, supplying super-accurate barrels, just like their competition brothers. The next logical step was to start building complete rifles, something that, in the best Spanish Basque gunsmithing tradition, Bergara could not resist.

If there is one rifle that is considered the world’s standard centerfire action, it is the Remington Model 700. And it’s this action that Bergara chose for its Bergara B-14 line of rifles.

In my work, I shoot a lot of Model 700 rifles, and I also own a few. Some are customized. I like the feel of the Model 700 action, but only when it is polished and trued. To that end, this simple action is fun to customize with myriads of available accessories and aftermarket parts. This upgrade-ability is the real beauty of the 700 platform—it can be whatever you want it to be. Just look at to the Brownells catalog to see how easy it is to customize your own 700.

Likewise, the team at Bergara, with hundreds of years of Basque gun-making tradition, upgraded the 700 design with all the custom rifle modifications, but at a fraction of the price.

The extractor is one of the weak points of the Remington-made 700s, so the Bergara B-14 was designed with a sliding-plate extractor, which is even larger and more rugged than the one on a custom Sako rifle. The team cones the bolt face and the breech, too, and the action raceways are polished for the feel of a slick, well-oiled sewing machine.

All Bergara B-14 rifles come with the company’s world-famous chrome-moly steel barrels with matte blue finishes. The short-action Varmint rifle I tested is tough looking with a 24-inch barrel that has a 1-in-10-inch twist rate.

It’s also available with a 20-inch barrel in .308 Winchester and a 22-inch barrel with a 1-in-7-inch twist for the 6.5 Creedmoor cartridge. The barrels come with 5/8×24 threading in the U.S. and M18x1 threading in Europe. The company offers more calibers in both short and long actions, including the .300 Winchester Magnum and .30-06 Springfield.

I really like the barrel profiles, twists and muzzle threads for each caliber, as they are dead-on for each market. Big-game rifles such as the Timber, Woodsman and Hunter all have #3 barrel tapers, but the varmint and tactical versions have the heavier #5 taper, with or without muzzle threading.

Personally, I don’t consider myself a 6.5 Creedmoor expert and my experience with that cartridge is limited, so I can’t comment on the selection of a 22-inch barrel for it, but the 20-inch tube is a great fit for an all-around .308 Winchester. For me, the .308 Winchester is the king of versatility, and it’s my caliber of choice if I could only have one rifle. I’d go so far to say that, in my humble opinion, the 20-inch barrel is the best all-around choice for a .308 Winchester, so I thoroughly agree with Bergara picking this length and profile for most of the B-14 Hunter versions. To prove my point, consider that the 2010 World F-Class Target Rifle 1,000-yard championship was won with a 20-inch barrel, so don’t tell me you can’t shoot far with such a short stick.

But after saying this, indulge me with doing the opposite, as I could not resist testing the varmint rifle with the longer 24-inch barrel. Why? In recent years, I’ve become obsessed with shooting very far, and even organized the “King of 2 Miles” competition. Therefore, I violated my own logic and asked for the longer stick.

Whether you have the 20- or 24-inch barrel, the B-14 is, in my humble opinion, the best option on the market if you want to start building your dream .308 Winchester varmint/tactical rifle on a budget. The reason is that the B-14 rifles have barreled actions on par with most custom rifles costing several thousands of dollars more, and they come from the Bergara factory ready to be customized without throwing away expensive parts. Such is the magic of the B-14 series.

This isn’t to say that the models with composite stocks with detachable magazines aren’t up to the task, or that the single-stage trigger—adjustable from 1.5 to 5 pounds—is bad or has any creep. They performed fine, and both have a nice feel.

But this particular package I tested gives you the chance to test and hone your skills on a budget. And after some time on the rifle, spend as much as you dare to add a custom stock, such as a McMillan composite or a McRee aluminum chassis, and then add a top trigger from TriggerTech or Timney.

Considering the B-14’s reasonable entry price, you can still build your dream Remington 700 clone at half the cost of most custom rifles. Perhaps you don’t want to spend any time customizing and want, directly from the factory, the same B-14 barreled action on a composite adjustable stock with internal aluminum mini-chassis and AICS-spec Magpul magazines. If so, then Bergara has the B-14 HMR (Hunting & Match Rifle) with all of those aforementioned bells and whistles, but at $1,150. However, that price is a fraction of the cost of many other modern Remington Model 700 chassis rifles.

As the top of the B-14 line, and roughly $500 over the HMR, Bergara has the B-14 BMP (Bergara Match Precision), a chassis-equipped rifle with a bonus—an exposed barrel nut similar to the ones on Savage rifles—that allows for a quick barrel change.

All have the same barreled action and come with sub-MOA warranties, even though most Bergara rifles will shoot way smaller groups out of the box.

Precision or sniper rifles get this distinction through their outstanding levels of accuracy. Most sniper rifles carry a sub-MOA tag, and I found that Bergara rifles are no different, but at an entry-level price.

The Varmint, the HMR and even the BMP all have basically the same accuracy levels. Bergara also has warranties for very conservative sub-MOA performance. The company could have been much bolder considering how well Bergara B-14 rifles shoot, but at this price range they outshine the competition.

By the way, for years I have standardized my .308 Winchester hunting accuracy testing with Nosler 168-grain AccuBond boxed ammunition. But due to environmental restrictions on lead bullets in my area, I also use lead-free Nosler E-Tip loads. Both give incredibly consistent groups and very similar points of impact, if the rifle does its part. I honestly think these rounds can be as accurate as, or better than, handloads.

I couldn’t resist testing my own upgrade concept and added some custom touches to the Bergara B-14. Most competitive shooters would do the same to participate in Precision Rifle Series (PRS) matches, once they’ve honed their skills and are ready for the next investment.

Therefore, I selected a tried-and-proven McMillan A3-5 stock, which added around 1 pound to the final weight, but gave the rifle a new and more consistent feel. I also added a Pacific Tool & Gauge floorplate with a detachable AICS magazine. Then I installed a crisp but affordable TriggerTech trigger adjusted for a 1.5-pound pull, which is as low as I would dare to go on any non-competition rifle.

The results weren’t surprising at all and reflected the capabilities of the B-14 action. The group sizes went down to a custom-grade average of 0.51 MOA for 20 five-shot groups. 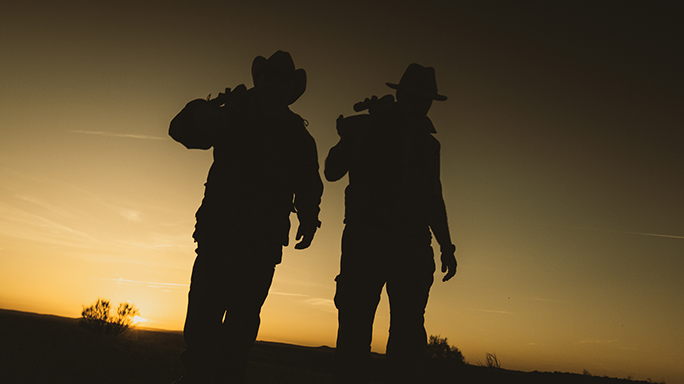 Now that we’ve established the Bergara B-14 is an affordable precision rifle, is it perfect? No. No sensible shooter would expect the same performance from a $1,000 Bergara rifle as the mythical Steyr SSG 08 at four times the price. But I don’t see a better option on the market if you have a limited budget, want a precision hunting rifle, or if you’re competing in the Precision Rifle Series.

This is a super budget-minded tack-driver that can serve as a hunting platform and as a competitive bolt gun for PRS matches. Plus, it will let you ponder future upgrades without having to discard expensive parts for which you already paid your hard-earned dollars.

It is also an excellent option as a secondary rifle in case you can’t afford two Steyrs and still want to carry two precision rifles on your hunting trips. If so, you may end up using it much more than you think.

This article was originally published in “The Complete Book of Guns” 2018 #200. To get a copy, visit outdoorgroupstore.com.