by Staff Writer
in Guns, Rifles
0

0
SHARES
13.6k
VIEWS
Share on FacebookShare on Twitter
Sinister. Do you know where that word comes from? It comes from the Latin for “left” because the ancient Romans thought there was something evil about left-handed people. Now we know that isn’t true, with about 10 percent of the world’s population being left-handed. But that also means that one in 10 shooters is probably left-handed, and while some long gun actions are fairly ambidextrous to use, there are some rifles that have to be designed just for left-handers. If you or a family member have been struggling to use a right-handed gun, stop! There are plenty of left-handed rifles on the market.

If there’s one thing we can say about the Ridgeline from Christensen Arms, it’s that it caters to left-handed rifle shooters who need plenty of variety in terms of caliber. The 6.3 lb.-Ridgeline comes in seven different chamberings for lefties (6.5 Creedmoor, 6.5 PRC, 7mm-08 Rem, 28 Nos, .308 Win, .300 Win Mag, and .300 PRC) and is made with a sporter carbon fiber composite gunstock and a stainless steel radial muzzle brake. This rifle is STD 6-48 Rem 700 Optics Base Compatible to make it a stalwart hunting companion. For more information, visit christensenarms.com

There’s a lot to be said about the left-handed .308 Win Ruger Scout Rifle. Left-handed shooters will appreciate this feature-packed rifle that was designed with their ergonomics in mind. The non-rotating, Mauser-type controlled round feed extractor has a fixed blade-type ejector that ejects empty cases as the bolt is moved backward, so no more dodging casings on your non-dominant side. The forward-mounted Picatinny rail lets shooters optimize the rifle to accommodate lights and lasers as they see fit and the built-in sighting system has an adjustable ghost ring rear aperture sight and a non-glare, protected blade front sight. Comfort is enhanced thanks to the soft-rubber buttpad with spacers which allow the rifle to be appropriately sized for shooters of all sizes. For more information, visit ruger.com

Left-handed rifles have come a long way and the Apex Hunter XP Left Hand from Savage Arms proves just that. Here you get a Model 110 rifle with a mounted and bore-sighted 3-9x40mm Vortex Crossfire II scope that features the Dead-Hold BDC reticle for optimal target acquisition. On top of this, the rifle delivers accuracy and adjustability due to the Savage® AccuTrigger™, floating bolt head, and customizable length-of-pull. When it comes to calibers, the Apex Hunter XP Left Hand is available in 13 different chamberings (.223 Rem, .22-250 Rem, .243 Win, .25-.06 Rem, .270 Win, .30-06 Spfld, .300 Win Mag, .308 Win, .350 Legend, 6.5 Creedmoor, 7mm PRC, 7mm Rem Mag, 7mm-08 Rem) to support the needs of hunters and long-range shooters of all types. For more information, visit savagearms.com

We couldn’t have a list of left-handed rifles without throwing in a tactical firearm. The 5.56 NATO Stag Arms Stag 15 SPR delivers a lightweight AR-15 platform that doesn’t scrimp on rigidity or accuracy. The 1:7 twist rate and a rifle-length gas system let shooters apply a wide array of cartridges. Included is a Stag mil-spec, Magnetic Particle Inspected M16 bolt and carrier group that is Salt Bath Nitride-treated for long-term use and simple cleaning. The free float 16.5″ Slimline handguard enhances accuracy, covers the gas block, and includes multiple M-Lok slots – allowing all you southpaws out there to customize the rifle to your heart’s content. The Stag 15 SPR also includes a Magpul MOE Rifle Stock, MOE Pistol Grip, MOE Enhanced trigger guard, PMAG, and an A2 flash hider. For more information, visit stagarms.com

Steyr Arms has been building high-quality firearms since the 14th century. For today’s black rifle shopper, it offers one of the most accurate sniper systems available and one of the most iconic rifles ever made. While Steyr’s SSG was one of the first military bolt-action rifles to use space-age materials, the 5.56mm NATO “Army Universal Gun,” or AUG, was the first truly space-age-looking weapon. A radical bullpup (the action is located behind the fire control mechanism) with a telescopic sight built into the receiver; a flip-down foregrip; a skinny, user-removable-without-tools barrel; and clear plastic magazines, no one in my shooting circles had ever seen a battle rifle like it.

The AUG offers both short and long Picatinny rails for mounting your choice of optics and you can choose between an integrated 1.5x optic or an integrated 3x optic. Steyr offers a left-handed AUG bolt so that shooters can convert the rifle from right-handed to left-handed operation. Just remove the action from the stock, switch over the ejection port cover, and install the left-handed bolt.  For more information, visit steyr-arms.com 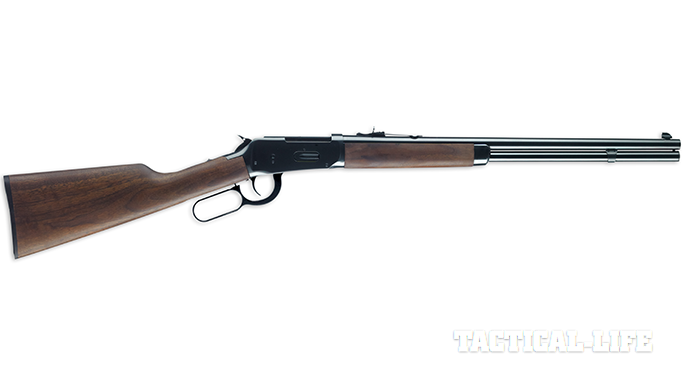 Weatherby pioneered the high-velocity hunting rifle in the 1960s and ever since the company continues to provide rifles and shotguns and hasn’t shortchanged the left-handed shooter. We tested a Mark V Accumark in .257 Magnum, Roy Weatherby’s favorite of all the calibers he created. The .257’s 26-inch barrel launches an 80-grain Barnes TTSX bullet at 3,800 fps, making it one of the hardest-hitting, flattest-shooting varmint guns in the world. Topped with a Leupold 4-12X scope in Weatherby-marked Talley Rings, the .257 was zeroed at 200 yards, with only a 9-inch drop at 400 yards! Out of the box, the Mark V was a laser, its crisp 3.5-pound trigger making it easy to nail metal silhouettes at 300 yards. The Mark V Accumark is available for left-handed shooters in .257 Wby Mag, .30-378 Wby Mag, .300 Wby, .338-378 Wby, and 6.5-300 Wby.

Don’t Get Left Behind, Lefties!

Now it’s time to ask why, as a “normal” right-handed shooter, did I get so interested in firearms designed for the other team? First, when I realized my wife was a left-shoulder, left-eye long gun shooter! Secondly, a dear old friend and shooter had recently suffered a stroke and lost a lot of motor control in his right hand, which he may never recover. It seemed to me that having a rifle or two that I could learn to shoot left-handed along with my wife might be a good idea.

At first, I was afraid that I would not be able to duplicate my battery of arms for southpaw use. I didn’t have to worry. We’ve just scratched the surface of what’s available here. From semi-auto AR-style rifles from Stag and Rock River Arms to rimfire turnbolts from CZ to target and tactical bolt rifles from Savage, there is a long list of gun-makers who are catering to the 10 percent of the population who fire from the left side.