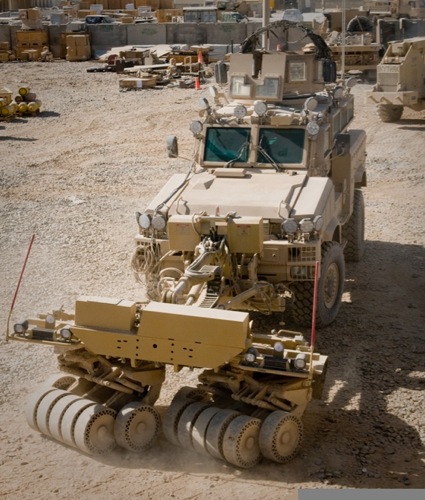 The Self-Protection Adaptive Roller Kit System II is the latest in counter improvised explosive device technology. The U.S. has been using mine rollers for more than 30 years, said David Grant, former U.S. Army combat engineer and C-IED instructor with Task Force Paladin. Grant said their original use was to verify mine fields were clear after an initial sweep. They acted as a final test before troops crossed a mine field, although today they are one of the first lines of defense. (U.S. Army photo by Spc. Edward A. Garibay, 16th Mobile Public Affairs Detachment)

The military has reduced the number of troops wounded or killed by homemade bombs in Afghanistan by 37% since August by improving its ability to find the explosives before they blow up.

About one-sixth of the bombs used by insurgents in January ended up wounding or killing troops compared with the one-quarter of such bombs that caused casualties in August, according to figures from the Joint Improvised Explosive Device Defeat Organization, the Pentagon’s agency for combating makeshift bombs.

In January, 215 IED attacks wounded or killed troops compared with 341 attacks that caused casualties in August. That dramatic reduction occurred even though the number of IEDs planted has remained at between 1,300 and 1,500 a month during that time.

“IEDs are still responsible for the greatest number of our casualties in Iraq and Afghanistan, but we are making progress against the enemy’s effective use of them,” Lt. Gen. Michael Oates told USA TODAY.

In 2010, IEDs wounded or killed 7,800 troops in the U.S.-led coalition, according to data released to USA TODAY. That accounts for nearly half of all casualties.

Mexico promises to do everything it can to find agent’s shooters.