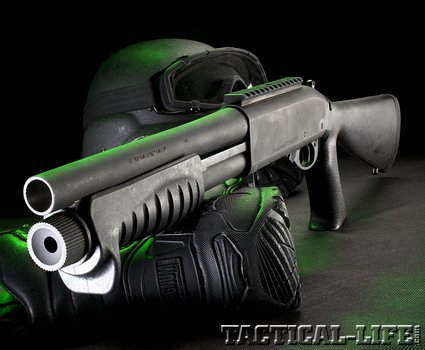 For the ultimate in tactical entry weapons for military or police units, Remington has well designed a total shotgun breaching system. From the aggressive muzzle with functional V-cuts to the adjustable Blackhawk Knoxx stock and bungee-style sling, the door-popping 870P is ready to go.

Narcotics intelligence based on controlled buys of Crack Cocaine and confidential informants (CI’s) had determined that the seller was a three-time loser named Ronald. “Three-time loser” description did not do Ronald’s criminal career justice (forgive my pun…) with multiple felonies and misdemeanor convictions over his 25-year sordid life, he had only served prison time at the state level three times. The narcs knew Ronald and also knew his propensity for violence. The CI’s had purchased the dope in the house where the suspect was “staying” and commented that Ronald had heavy duty dead-bolts on his upstairs bedroom door where they believed he kept his dope and the .40 he was supposed to be armed with. 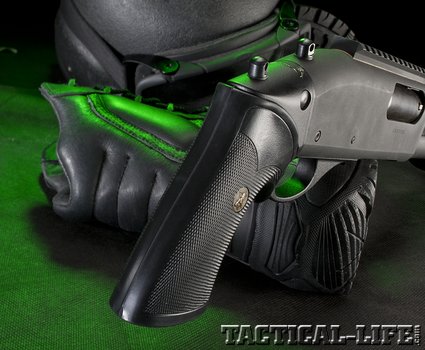 The tactical team plan was developed based on a briefing by the narcotic detectives, a recon of the target by the team leader and experience based on “hits” of other drug houses with the same architecture. The team was brought in at 0400 hours for an early morning search warrant execution. It was determined that Ronald’s second-floor bedroom door would be a problem because the old-style layout had very narrow hallways, preventing an adequate backswing from a breaching ram but the door was solid hardwood. The breaching team put their heads together and came up with an agreed upon method of entry. After the mission planning was completed, team members set up traffic cones in the department’s garage area and rehearsed the hit until everyone was on the same page and movements looked smooth. 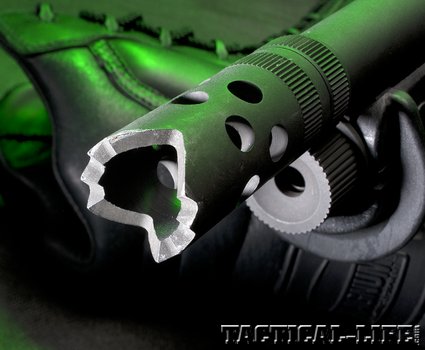 Caravanning to the target, the tac-team led the way in their raid van with unmarked detectives and marked uniformed cars pulling up the rear. The plan had the team debussing around the corner and two houses down from the target. They would stack-up, squeeze up and move across the front yards of neighboring houses. Over-watch would be provided from a team sniper with an AR and a 1-4X variable scope working from a G-ride (police plainclothes car), which pulled up across the intersection. Detectives in raid jackets would cover the perimeter as the team approached. Led by two operators with carbines in Op Cell #1, the team approached the front door. Op Cell #1 stopped off-line and short of the door. The primary entry man covered the door as his partner went on-safe and on-sling and prepped a flashbang.

The two-man breaching team moved forward toward the door. As is custom and required by law even in forced entry narcotics search warrants, the number one man grabbed the screen door, stepped across and started pounding on the side of the house and yelling, “Police—search warrant demand entry!” The ram man stood by off to the side of the door until the team leader yelled “Hit it!” Swinging the ram with his hips and total body mass against the heavy door the jamb splintered and the door blasted open with the first hit. As the ram man hugged the wall, the second man in Op Cell #1 visually cleared the doorway and tossed the bang inside. Less than a second and a half later it detonated with a brilliant flash and concussion.

Immediately Op Cell #1 entered the front door. Encountering no one they continued through the dining room toward the kitchen at the back of the first floor, yelling, “Police—search warrant!” Hot on their heels, Op Cell #2 moved to the left and up the stairway to the second floor. Moving down the hallway to Ronald’s bedroom, the point man stopped short and posted on the door. Another flash-bang was drawn and prepped by the number-two man as the secondary breacher moved past them and across the door. The breacher maneuvered his Remington 870P shotgun and drove the notched barrel 45 degree down and 45 degrees into the wood above the deadbolt and fired. The first shot of breaching ammo blasted a large hole through the hardwood and into the doorjamb. Immediately outside the bedroom a window was broken out and another FNDD attached to a “bang-pole” detonated. The plan had a two-man distraction team of operators use the bang-pole to further disorient the bedroom occupants. Pumping the forearm of the breaching shotgun the operator fired again. This time the door slowly swung inward. Op Cell #2 deployed yet another distraction device into the bedroom before violently moving inside. Stepping into the room the white lights of their entry carbines illuminated a wide-eyed Ronald standing in his boxers just before he was unceremoniously dumped on the floor and handcuffed.

The dope (several 8-balls of rock Cocaine) and Ronald’s pistol (which came back as stolen previously in a burglary) were found in the closet. Ronald went to jail and all the good guys went home at the end of their shift. That’s a good day’s work. 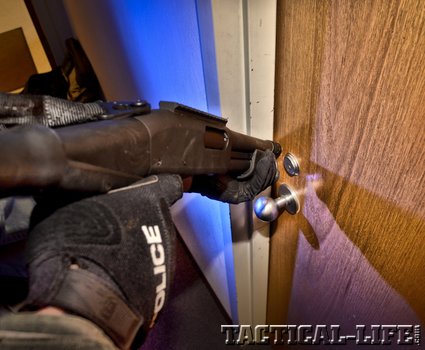 When busting through a door with a shotgun, the correct breaching technique is to point the muzzle 45 degrees downward and 45 degrees toward the doorjamb. Joe Levack photo

Fact is that most law enforcement agency tactical teams within the United States do not have the capability to utilize explosive breaching. This is sad because the use of high explosives in the breaching realm has improved tremendously over the years and is oftentimes safer to employ than mechanical breaching (the use of rams, sledge hammers, pry bars, jamb spreaders and the like). These large and heavy tools can result in operator injuries like crushed or broken fingers, lacerations and more. Also sad is that most tac-teams stay away from shotgun breaching as well.

The use of specialty shotguns and breach­ing munitions has been around in the U.S. since the 1980’s after LAPD pioneered their use domestically around the time of the 1984 L.A. Olympic Games.

Early versions of both used dental porcelain as the breaching projectile and standard smoothbore shotguns. The LAPD SWAT Team had the first barrel stand-off designed to limit barrel bounce and possible burst from overpressure from a standard flat muzzle. Over the years several after-market manufacturers have offered to thread your barrel and install a stand-off, but until now no major manufacturer has developed a breaching system complete from the factory.

With over 10 million produced, the venerable Remington 870 has been on the streets of America with our law enforcement personnel and serving our nation’s military in standard LE configuration as well as in a breaching role for years and years. Therefore, it makes perfect sense that Remington would examine the 870 and offer from the factory a complete package. And they have done so. The 870P Breacher’s Kit is well thought out, with little things that certainly add to its role in this function.

The 11.5-inch barrel has been threaded to accept a vented stand-off by Remington. This stand-off has eight “points” from “V” cuts to allow the shotgun to be forcefully shoved against a door and stay in place during recoil thus reducing barrel “bounce” off target. Two of the larger “V” cuts can be used with appropriate breaching rounds to cut through rebar if the mission dictates. Based on the shortened barrel the magazine capacity is three, which means with one round in the chamber, four rounds of breaching ammo are available before a reload is necessary.

The forearm is a new design with a protective shield or flange that protects the operator’s hand from slipping off and possibly in front of the muzzle. On both sides of the forearm a little cutout retained by a single Philips screw allows the included LED micro-lights white lights to be installed. This is a nifty little accessory that provides the operator enough light to see what they’re doing but not too bright to blind them from the reflection off the door.

A section of Picatinny rail is mounted on top of the receiver. If the operator wants to affix a red-dot sight or white light that option is available, since the stand-off does not affect buckshot or slugs the shotgun can be used as a standard scattergun in a deadly force mode (if a breacher armed with specialty rounds were to encounter a deadly threat, rest assured these “Avon” rounds would be deadly force).

A Blackhawk Knoxx adjustable stock comes from the factory. For those agencies that want to further reduce the overall size of the breaching gun a BreachersGrip pistol grip with recoil reducing design is available from Blackhawk as well.

Remington has included two spare shell carriers backed with hook/pile material that can be mounted on the left side of the receiver to supply additional rounds (12 gauge breaching fodder is available for hollow-core, solid wood or metal security doors and is differentiated by color).

Also supplied in the Breacher’s Kit is a bungee-based sling called the Button Sling. This heavy-duty grade black nylon covered sling has elastic material inside the sling to allow the breaching shotgun to be held tighter to the body or moved out of the way so that another long-gun can be brought into play for deadly force encounters. To aid in this function Remington has included a Kydex “retention holster” which can be mounted to the operator’s gun belt or vest carrier to hold the 870P.

Modifying available 870’s for breaching comes with costs and risks, sending a barrel under warranty out for threading would certainly violate that warranty. Cutting the barrel down requires ATF paperwork. Additionally some of the accessories available in this kit are not available otherwise, such as the lighted forearm. Why not go to Remington and order an 870P Breacher’s System directly? You’ll get everything you need plus a protective carry case.

Shotgun breaching is a viable method for LE operators and military personnel to force entry. It is safe and gets the job done. As a tactical team, soldiers or Marines, get trained, get squared away and get the 870P Breaching System from Remington. It’s a blast. For more information, visit remingtonmilitary.com or call 800-852-7634. 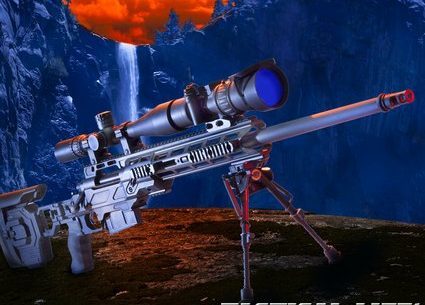 For the ultimate in tactical entry weapons for military or police units, Remington has…