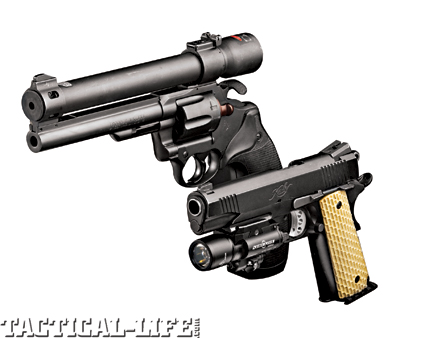 (Top gun) A tried and true Terminator special! A replica of the first fully functional integrated laser on a .357 magnum. (Bottom gun) A Kimber 1911 with a SureFire light mounted on a rail.
Comment(s)

Back in 1984 when Arnold Schwartz­enegger traded in his sword for an AMT Hardballer long-slide .45-caliber pistol fitted with a functional laser, audiences were captivated by the fearless killing machine that would later go on to become the Governor of California.

Amid the explosions, the robots, the one-liners and more explosions was a device that would change optics forever. James Cameron’s The Terminator was the first film to feature an integrated laser sight on a firearm. It would be years before the technology was perfected and SureFire Optics became the firm it is known as today.

SureFire’s origins begin at Bell Labs with Dr. John Matthews. He was conducting military experiments using medical-grade lasers. Matthews then formed Newport Corporation where he miniaturized the laser, made a custom grip and custom batteries. Ed Reynolds was one of the founders of Laser Products along with Dr. Matthews and Dr. Peter Hauk.

“It goes back to Newport before Laser Products was a company. We wanted to integrate a laser into a handgun, a Colt Trooper .357 magnum. It had to be rugged and withstand rough treatment,” said Reynolds from his office in Fountain Valley, CA.

A medical-grade laser on a firearm as a sight had huge potential. The work that Dr. Matthews, Dr. Hauk and Reynolds were doing was light years ahead of anything else that was going on at Newport Corporation.
“What was being done at that time was so alien to anything else that was being done at Newport that they sold off the assets for the development of the integrated laser. That is how Laser Products was formed in 1979. Newport destroyed a lot of product because they couldn’t be liable for anything that was being created.” Reynolds said, rifling through work orders from 30 years ago and chuckling while he reminisces.

Lasers, Cameras, Action!
Powering the first solid-state lasers was not efficient. Many people thought the laser that was featured in the original Terminator was not real. It was actually fully functional. For the laser on Schwartzenegger’s .45 to be functional, a 10,000 volt cable ran down his sleeve and connected to a battery on his belt. Ed Reynolds designed the mount and interface. He made two models, one for show and one that would be functional.
With Terminator now a huge hit movie and Reynolds’ laser helping it achieve that status, it would be expected that Reynolds and all of Laser Products would be catapulted to fame as well.

“I got a hat and a t-shirt.” Reynolds explains humbly. “Realistically, it had no real impact on our company. Our credit for the laser was at the very end of the credits. Nobody thought to tie us to the product.”

There would be no need for moviegoers to know where the laser sights and flashlights came from because Laser Products had already established themselves as the preeminent suppliers of tactical lamps and lasers. Laser Products changed their name to SureFire in 2001 to tie their brand with their best selling product. Their name changed but their methods did not. Everything that is made at SureFire is made in house. Even the machinery that is used to manufacture the products is engineered and created in house.

It should be no surprise that SureFire supplies 80% of the laser sights and optics in film and television productions. Ron Canfield, head of SureFire’s public relations works directly with the production and prop houses.

“These products last 20 years. We deal directly to prop houses like Cinema Weaponry. They know exactly what they need. Size, beam, weight, etc. etc.” Canfield said while we toured the facility. 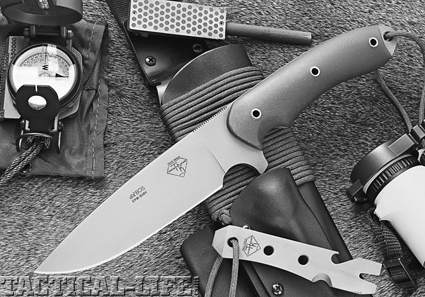