1
SHARES
84
VIEWS
Share on FacebookShare on Twitter
Blackheart International’s Draco is a SBR AK that maintains maximum ballistics and practical application. Its compact size allows for easy concealment and it operates smoothly. Shown with a Burris FastFire optic.

The AK-47 has always had a strong, dedicated following. The efforts made to keep it available despite so much effort spent preventing its import is a strong indication. American-made parts once nonexistent are now prevalent. Even completely American-made AK-47’s are available. Even though a high-end market now exists, many still want a reasonably priced gun built in the country of origin.

Over the years, there have been four different countries that have seen the most imports. A couple of those are now scratched off the list by import laws, and although Russian weapons are available, they are at the higher end. Romania remains one of the most prevalent. Its weapons utilize a simple system that works when many others simply don’t. That feature alone keeps one in my gear most of the time. Most Romanian imports are reasonably priced weapons, and this makes them available to more gun owners. 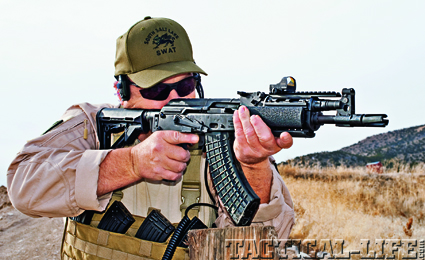 Romania has long been one of the favorite builders of simple stamped-steel AK-47 rifles. Early on, these were high-quality weapons, generally assembled from new mil-spec parts in Romania. For the most part these days, however, they are simply parts guns. They can be built on receivers already legally in the country with Romanian parts or American-made receivers. Their quality level can range quite a bit, though. True Romanian-built weapons are becoming a thing of the past. One exception to this is the Draco pistol. As a pistol, different rules apply and they are 100-percent Romanian built and imported intact. The only change is generally the trigger.