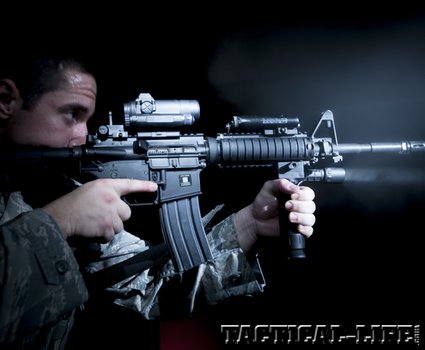 1 of 3
003_phatch
Battle-tested lighting technology and techniques have rapidly evolved, making them indispensible tools that can potentially help operators or make them the target. 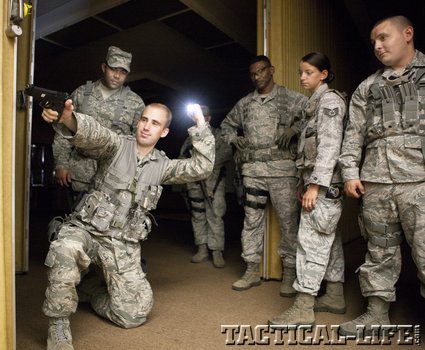 2 of 3
007_phatch
Keeping the light off the body presents a harder target but also puts the operator in a poor shooting position. 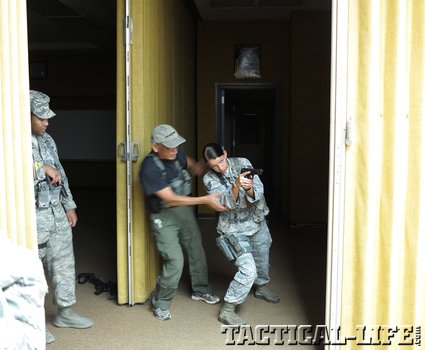 3 of 3
019_phatch
Hesitation and indecision can expose operators and their teammates. Move with a purpose and never be timid. 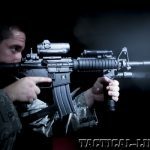 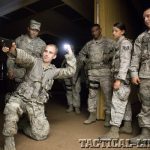 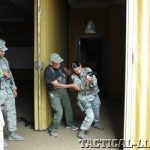 Like the flash on a camera, activate the flashlight quickly enough to take a “snapshot” and then move swiftly away from the spot they may have last seen you. The simple message becomes crystal clear to the 9th Security Forces Squadron (9SFS) participating in low-light training. Use the white light only when necessary and use it very sparingly, for turning it on and leaving it on allows the enemy—whether a criminal or insurgent—to get an exact fix on your position and could invite unfriendly fire.

The 9SFS Airmen coincidently are no strangers to unfriendly fire, with most being multiple-tour Operation Enduring Freedom (OEF) and/or Operation Iraqi Freedom (OIF) veterans. On a previous six-month deployment to Bagram Airfield, Afghanistan as part of the 455th Air Expeditionary Wing, 9SFS Airmen encountered numerous attacks, which included suicide bombers, attempts to penetrate the perimeter of the base and small arms fire from insurgents. 9SFS Airmen successfully protected the assets inside the perimeter, with personnel sustaining only minor injuries. On the other side of the wire, more than 20 insurgents were killed in the various attacks.

Defenders Of The Force

Airmen in the Security Forces career field first go through six weeks of basic training, followed by nine weeks of technical training at Lackland Air Force Base, Texas, with the 343rd Training Squadron, known as the Security Forces Academy. Upon graduation and assignment to the 9SFS at Beale AFB, in Northern California, all Airmen, old and new, will eventually go through more in-service training, earning the badge that reads “Defensor Fortis,” Latin for “Defenders of the Force.”

The Security Forces serve as the “military police” for the Air Force, with the dual role of providing traditional police and investigative services for Beale AFB residents, as well as infantry skills as the air base ground defense forces of the United States Air Force (USAF). The 9SFS’s responsibilities include controlling the five entry gates to Beale AFB, traffic control, protecting firearms storage facilities, non-priority and priority aircraft such as the nation’s fleet of U-2 and RQ-4 Global Hawk unmanned aerial vehicle (UAV) reconnaissance aircraft.

Yet, before the 1994 Fairchild AFB and 2009 Fort Hood shootings, if an active-shooter incident occurred at Beale, the 9SFS would have to wait (over an hour) for the local SWAT team to respond. Today, in the event of a crisis on base, it is clear that they are now the informal patrol rifle officers or ad hoc SWAT—night or day. To better prepare them, 9SFS trainers consistently put their Airmen through advanced tactical training in building clearing procedures, active-shooter response, hostage rescue, and low-light tactics.

Most law enforcement, military, and security professionals will work in various low-light conditions and must properly perform in less-than-ideal conditions. The performance of the 9SFS Airmen is a testament to their training, skills, and lessons learned while at Beale AFB or on an overseas deployment.

Some lessons learned while in training, deployments and through unfriendly fire about low light tactics include:

1. OWN THE NIGHT. Join the dark side and embrace the darkness as an asset. Use the cloak of darkness as a weapon against the adversary. Seeing an adversary without being seen is the greatest tactical advantage in any environment.

2. INVEST IN QUALITY EQUIPMENT. Lighting technology has rapidly evolved over the past few years. There are several weapons mounted, handheld lights, and accoutrements that are “battle tested” and proven reliable by U.S. special operations forces and infantry units fighting the global war on terror in Afghanistan, Iraq and other hot spots around the world. The specifics on type of light will not be discussed as it is a hotly debated topic and a personal choice. But, the types of flashlights selected, especially the size, power source, lumens (brightness), On/Off switching, and incandescent versus LEDs, are all important considerations. Due to the stress of a violent encounter, a simple functioning light is preferred versus one with many features that is difficult to manipulate.

And, those who install lights on their pistol should purchase a holster to accommodate the pistol and light attached. There are many reputable manufacturers making on and off-duty holsters that hold the firearm and mounted light when re-holstering is necessary with the de-escalation of force.

3. BE PREPARED. Though there are pros and cons, a weapon-mounted light is an essential piece of gear. Weapon-mounted lights were made to use the light and firearm at the same time easier. It enhances an operator’s ability to identify and engage a target quickly and effectively. In a rapidly evolving tactical situation, most prefer a weapon-mounted light to keep both hands on their firearm to provide the best opportunity to hit their target and end a violent confrontation successfully. Most know that shooting with both hands is easier to do under stress than hitting a target with one hand while manipulating a light with their other hand.

4. CARRY A SPARE. Always carry a backup light. Two is one and one is none. A handheld light is essential to law enforcement and a vital backup, belt/vest option when the mounted light fails. Check the function of your lights regularly and keep extra batteries and bulbs on hand. It is also not a good practice to use a weapon-mounted light as search tool unless the need for a firearm is necessary. Understand that there are also pros and cons of holding a handheld light while using a weapon, reloading, or handcuffing.

5. TRAIN TO SURVIVE. Train regularly with the equipment on the rifle and pistol. Work on quickly illuminating, shooting and scanning the threat area. Practice the activation of the light as well as manipulation of the rifle and pistol in total darkness. Practice malfunctions with the weapons and clearing them with the backup light in hand to avoid the worst-case scenarios; having the light frozen in the “ON” position while trying to clear the stoppage, thus telegraphing that your weapon is down and your exact position. Placing the light on the ground, tucking it under the arm, back in a pocket or between the legs, are all a waste of valuable time.

There is more to operating in the dark and low-light shooting than knowing how to hold a flashlight using different hand-held techniques i.e. Harries, Rogers, Chapman, FBI, Neck Index, etc, especially since they have far more applications than just shooting platforms. Manipulating the backup light is a tricky, uncomfortable, awkward skill that must be practiced with a rifle (and pistol) because the ability to grip either the same way it is normally held is now very different. Just prior to an operation or in the middle of an armed confrontation, is not the time to experiment with the techniques.

Supplement static range training with various reality based force-on-force scenarios that an officer may encounter to test, hone, and validate low-light tactical skills. There is no substitute for introducing a live opponent into the fight. The learning curve changes dramatically when targets move on their own, hide behind things, shoot or hit back. This allows one or more officers to improve individual and team tactics—and their ability to perform on demand—in a realistic and dynamic situation, against one or more opponents and innocent bystanders, by reinforcing tactical errors with pain penalties ala Simunitions FX marking cartridges.

6. ACHIEVE TACTICAL AND TECHNICAL PROFICIENCY. Attend a low-light school or two. Experiment and validate the tactics for yourself. Once proficient with proven techniques and tactics, practice good light and noise discipline in the field. Don’t silhouette yourself in front of a light source. Don’t activate the light in and/or linger in the fatal funnel. Move to a position of observation (around door or wall) before activating the light.

7. BE DECISIVE. Indecision and hesitation are extremely dangerous during a violent encounter especially when working with a partner. Use the on-off switch or strobe technique to mask movement. Once the decision is made to move (enter), move quickly, quietly and with purpose then search for threats. If no threats are encountered, determine your next step and continue to search the rest of your objective.

8. SHOOT, MOVE, COMMUNICATE. Remember that you are searching for a potentially armed and dangerous subject—expect to find them. Move tactically at a speed that allows you to identify and address any threat you may encounter. Whether with the firearm and/or white light, shoot, move and communicate. Move immediately after activating the light in case the suspect returns fire; the unfriendly fire is directed where you were and where you are.

9. WATCH THE HANDS. The failure to watch a suspect’s hands is a fatal error that has hurt or killed many officers. Resisting offenders must use their hands to arm themselves whether with a knife from the pocket or a firearm from the waistband to attack you. Keep them distracted once it is determined they are no longer an armed threat.

10. HAVE A PLAN. Have a plan after a use of force or armed encounter. Keeping a subject illuminated only works if you are positive that there is only one threat. Whatever the case may be, have a plan to continue clearing, handcuffing, and providing medical attention to an officer or suspect down scenario. Whatever the plan may be, always remember to use the light only when necessary and sparingly.

For those who want to “Aim High” and are interested in a career in the Security Forces or the USAF can go to airforce.com for more information or to find a local recruiter. 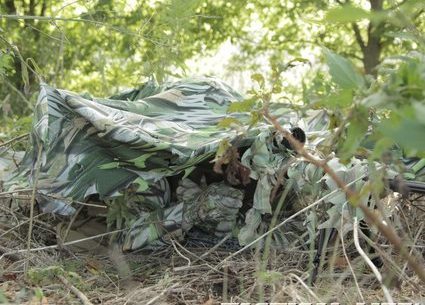 Like the flash on a camera, activate the flashlight quickly enough to take a…