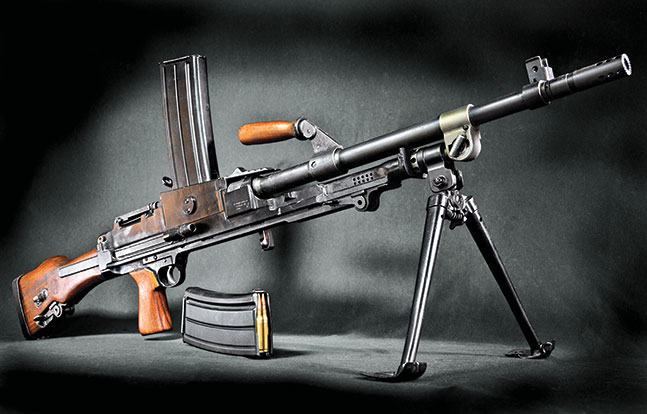 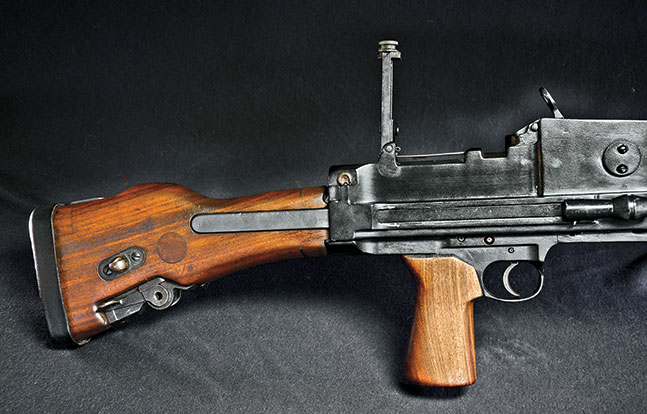 2 of 8
Blast From the Past: The Bren Light Machine Gun
The L4A4 variant of the Bren featured a wooden grip and stock as well as a tall rear sight that could be folded down to keep it from being damaged in the field. 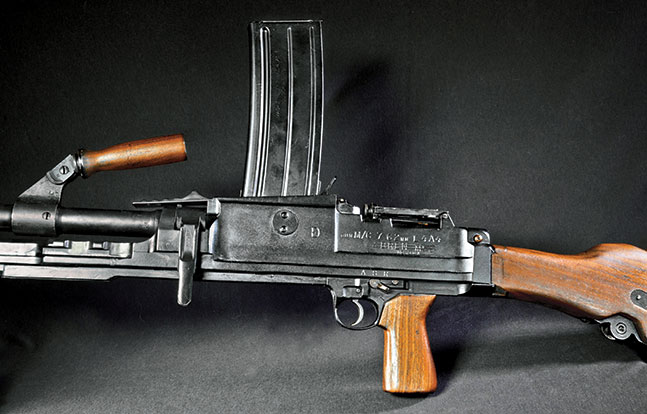 3 of 8
Blast From the Past: The Bren Light Machine Gun
The magazine release is located just behind the magazine. Also note the wooden carry handle, which helped with barrel changes when it overheated. 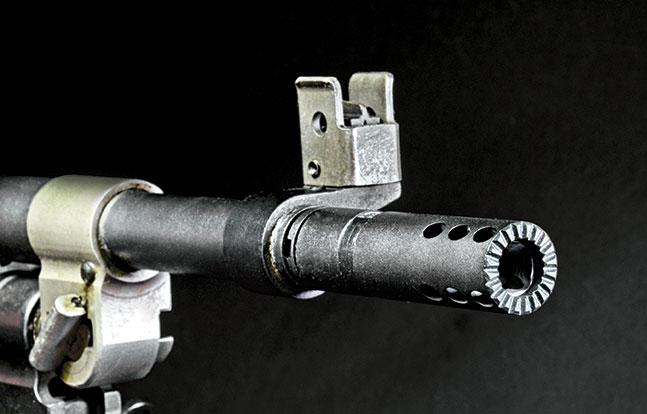 4 of 8
Blast From the Past: The Bren Light Machine Gun
The protected front sight is mounted in an offset position, and the muzzle brake helped reduce muzzle rise between shots. 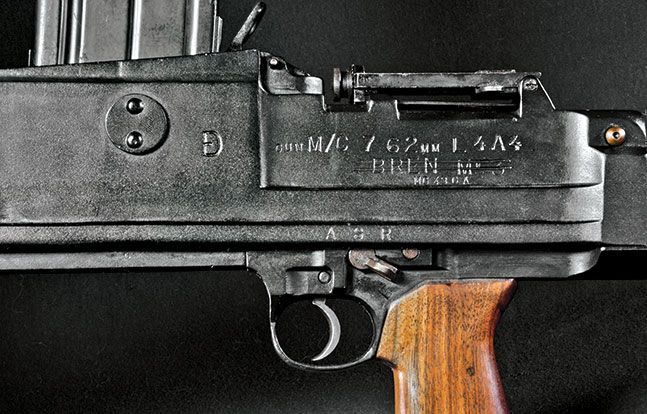 5 of 8
Blast From the Past: The Bren Light Machine Gun
The L4A4’s three-position selector switch is located on the left side of the receiver, just above the trigger. 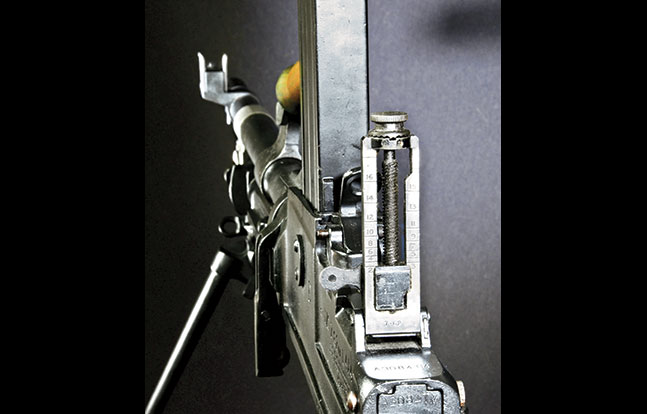 6 of 8
Blast From the Past: The Bren Light Machine Gun
Designed for use by a right-handed shooter, the front and rear sights are offset to clear the Bren’s unique top-mounted magazine. 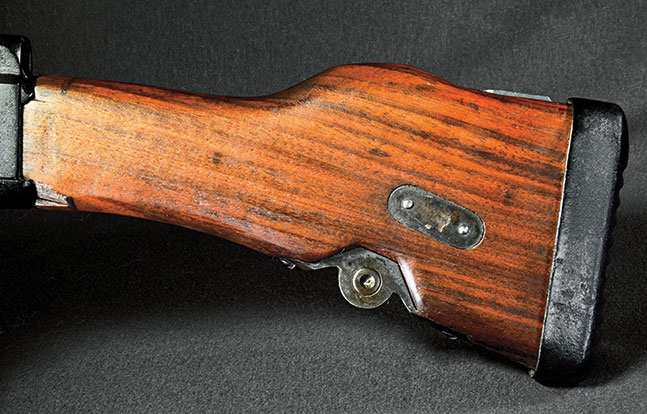 7 of 8
Blast From the Past: The Bren Light Machine Gun
The Bren’s wooden buttstock is designed specifically to allow for comfortable firing from a prone position. 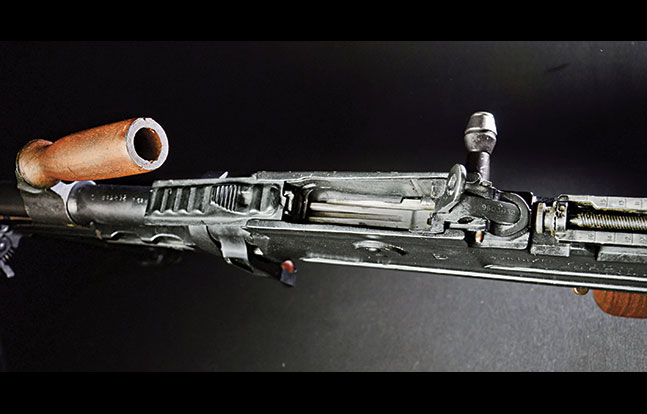 8 of 8
Blast From the Past: The Bren Light Machine Gun
The cocking handle, mounted on the right side, folds down against the receiver so it won’t snag during transportation. 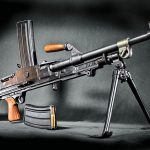 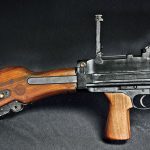 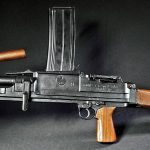 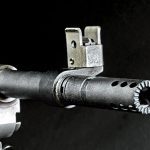 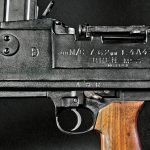 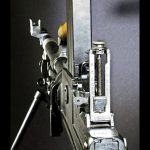 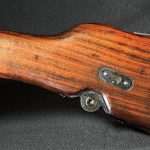 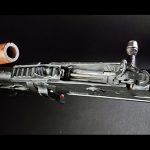 The Bren light machine gun entered service with Britain prior to World War II and served until the Falklands conflict. During that period, it gave fire support in two major wars—WWII and Korea—as well as various counterinsurgency conflicts. Its mission was to serve as a section automatic weapon that could be carried during an advance and deployed for close support. The Browning Automatic Rifle (BAR) served the same purpose in U.S. units, and the M249 squad automatic weapon (SAW) has this mission today. And, like the BAR, the Bren had its strengths and weaknesses.

The Bren Is Born

During the early 1930s, the British Army conducted competitive trails for a new light machine gun. Among those tested was the Madsen, which had an established combat record, since it had been used as early as the Russo-Japanese War, then in World War I and the Gran Chaco War prior to WWII. The U.S. BAR was also tested alongside the Vickers-Berthier, among others. However, it was the Czech ZB vz. 26 light machine gun that was eventually modified to suit British needs and licensed for production. One of the major changes was to modify the magazine, since ZB vz. 26 light machine guns were generally chambered for rimless cartridges such as the 7.92mm Mauser round, while the .303 British service round was rimmed. Other modifications included a shorter barrel, a recoil buffer and a lower cyclic rate of fire.

The Bren took its name from a combination of the first two letters of Brno, the Czech city where the original version had been developed, and Enfield, the location of the Royal Small Arms Factory. It uses a long-stroke gas piston system located under the barrel. A return spring is located in the butt. Additionally, the Bren is air-cooled, select-fire and has a quick-detachable barrel; normally two barrels were supplied with each Bren to allow a change if one got hot from continuous firing. Magazines feed into the top of the Bren, which necessitates sights that are slightly offset.

The sights work fairly well for a right-handed shooter firing from a prone position. It is possible to fire the Bren off-hand, but I always found it rather heavy for such usage. A left-handed shooter will not be able to position his head correctly to use the sights. On the 7.62mm NATO L4 Bren I shot while working on this article, the sights are quickly adjustable from 200 to 1,600 meters using a screw system. They seem to be precise, though I did not try firing at longer ranges. To keep them from being damaged when transporting the Bren, they fold down onto the top of the receiver. The cocking handle also folds against the receiver.

In addition to the sights, other features of the Bren are very well designed for firing while prone. The top-feed magazine allows the shooter to get low to the ground, and the ringed, paddle-type magazine release is easy to operate with the support hand. Another useful feature is the quite sturdy bipod, which positions the Bren solidly. The recoil buffer also helps quite a bit for firing from prone.

Experienced Bren gunners learned to fire the weapon from the hip, braced against the side to give fire support during an advance—“marching fire,” as the Brits termed it. This took quite a bit of arm strength. Although I haven’t read that Bren gunners were selected for size or strength, that has often been the case with light machine gunners. BAR operators were often above average size. A sling would have been of great value as well. I remember an acquaintance who had been a WWII Commando and Bren gunner. I’m 5’10” and weighed about 185 pounds at that time. In 1970s London, that usually put me a bit above average size, but the ex-Commando was at least 3 or 4 inches taller than me and had me by 30 pounds or more, and he was still in good shape. I have no doubt that he handled his Bren gun readily.

During combat in WWII, each Bren had a two-man team assigned: the gunner, who actually fired the weapon, and the loader, who carried extra spare magazines, a spare barrel and a tool kit. Of course, the loader was a fully trained gunner as well and could take over the weapon if the gunner went down. Other infantrymen would carry two Bren magazines along with their other kit to provide more firepower when needed. While the standard Bren magazine held 30 rounds, experienced operators did not load it all the way to enhance reliability. Another trick they learned was to load rimmed .303 rounds with each ahead of the previous round so that the rims did not overlap in such a way as to cause malfunctions. Operators also learned to turn the four-position gas regulator to allow for more gas when fouling built up from continuous firing.

Speaking of continuous firing, with a loader constantly supplying magazines, the Bren could get hot enough that it was necessary to change barrels, but that was not necessary except in heavy fighting. The relatively low cyclic rate of around 500 rpm also helped counter overheating, as did chrome-lined barrels supplied on some later Brens.

The Bren remained in British service at least until the Falklands War, though, when the 7.62x51mm NATO was adopted as the standard battle rifle round along with the L1A1 version of the FN FAL rifle, Bren guns were converted to that caliber and designated as L4s. This necessitated a new bolt, barrel and magazine. The first production L4A1 Brens were converted from .303-caliber Mk3 Brens between 1955 and 1956. As the L4A1 Brens entered service, the need for modifications was discovered in the field, resulting in the L4A2 Bren. There were also L4A3 Brens, which were converted from the Bren Mk2. Finally, in 1960, the L4A4 went into service. It was supplied with two barrels, one of which was chrome-lined. This barrel would be used as the primary barrel since it would be more resistant to overheating.

L4 Brens can be easily recognized by looking at the magazine, which is straighter than the curved .303 magazine on earlier Brens. In fact, the L4 will take standard 20-round L1A1 magazines, though Bren gunners are issued 30-round magazines. These magazines will also fit the L1A1 rifle.

Almost all of the shooting I’ve done with the Bren has been with L4 version, as my contacts with the British armed forces did not start until the later 1960s. Since I am right-handed, I found the sights quite usable when firing from a prone position. By firing on semi-auto, I found that the sights allowed me to shoot accurately to at least 300 meters. I’m sure more skilled operators can do much better. I also found the Bren’s pistol grip comfortable and the sturdy bipod a real boon since I could pull or push against it without worry about it collapsing. I have seen Brens mounted on tripods but have never fired one mounted in this manner. I have also seen them mounted on the light armored “Bren Carrier” and other vehicles.

I could use low cover well due to the top-mounted magazine, though I have read that experienced Bren gunners learned to try to camouflage the magazine when in concealment, as it was quite noticeable. Magazine changes are also relatively easy with the support hand since the magazine release is located just behind the magazine atop the receiver. I have primarily fired the L4A4 using 30-round magazines, but I’ve also used L1A1 20-rounders a few times. I have been told that since the magazines feed downward, gravity will normally allow them to operate reliably.

The Bren was replaced by the L108A1 and the L110A1 light machine guns (based on the FN Minimi) in the 1980s, when the L85A1 rifle in 5.56mm NATO replaced the L1A1. The Bren remained in service with some military units until the early 1990s. The Royal Marine Commandos carried the Bren as late as the Falklands War, as neither the L110A1 Para nor the L108A1 had yet gone into service. There’s a certain symmetry to that, as the World War II Commandos were among the best-known users of the Bren light machine gun. Since the L110A1 and L108A1 are lighter than the Bren, still incorporate a chrome-lined, quick-change barrel and use belts that allow for more sustained fire, this British version of the Minimi arguably offers an improvement over the Bren gun, which is, after all, a 1930s design.

It was a very good 1930s design, though—one that saw a lot of combat in both big wars and small wars with British armed forces and served with three-dozen or more countries. During WWII and Korea, as well as Malayan Emergency and the Mau Mau Uprising, British troops were armed with bolt-action rifles. As a result, the presence of a Bren gunner in a section who could lay down quite a bit of fire was a comfort. Today, the Bren light machine gun is an interesting piece of history, but for more than 50 years it played its part in making British infantry among the most effective in the world. 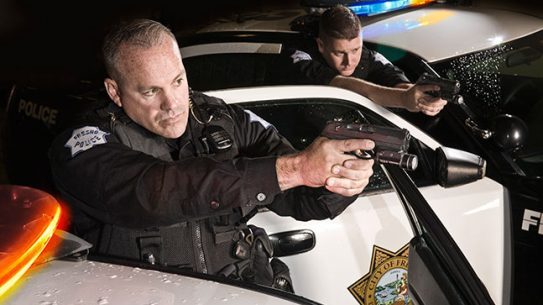 Rounding up some of the best primary and backup handguns for police and SWAT...

Survey Shows 1 in 20 Households Purchasing Firearms Due to...