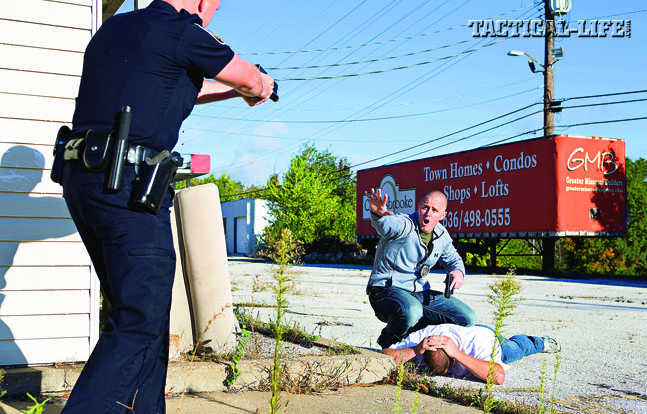 1 of 4
Blue-On-Blue Tragedies 1
In stressful situations involving a weapon, the uniformed officer may not notice the plainclothes officer’s badge around his neck 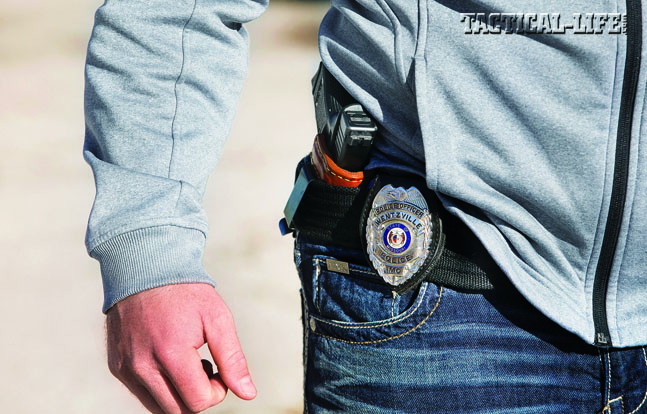 2 of 4
Blue-On-Blue Tragedies 2
In some cases, a shield on the belt may be overlooked. 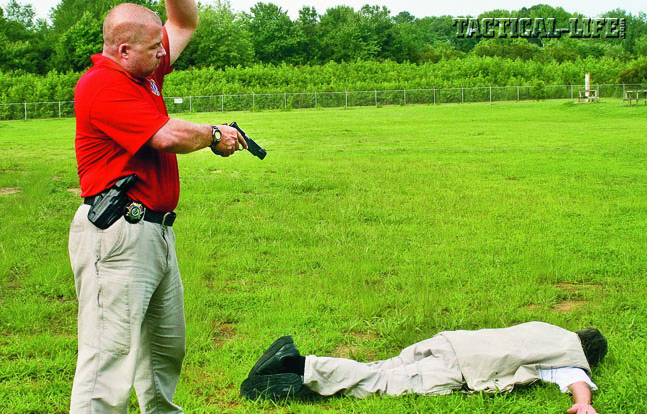 3 of 4
Blue-On-Blue Tragedies 3
Sergeant Bob Trautman demonstrates rotating his shield slightly above his head to be identifiable to responding officers. 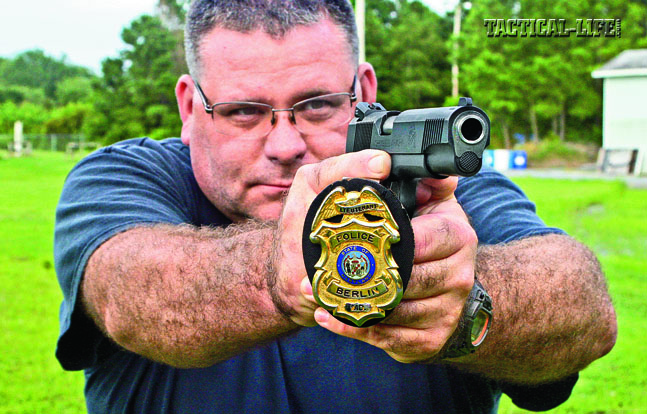 4 of 4
Blue-On-Blue Tragedies 4
Lieutenant J.D. Lawson has his badge positioned with his duty Kimber TLE, where it is easily visible from the front. 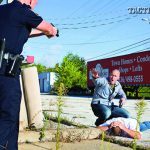 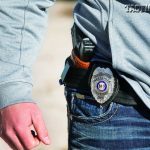 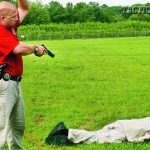 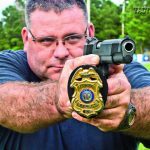 Dr. Bill Lewinski’s highly respected Force Science Institute recently issued an in-depth analysis of what we’ll call Case One. Law enforcement personnel were conducting a guns-drawn search outdoors for an armed and dangerous fugitive at night. One lawman peered over a fence with his issued Glock 17 in hand. Another officer saw an unidentifiable head and a pistol looming over the fence. He swung his light-mounted weapon in that direction, shouting a command. He perceived the pistol to be moving in his direction and fired. The bullet killed the first officer.

There were many lessons there, and any cop would be wise to look them up in the report at the Force Science website, forcescience.org. One point was that the officer who fired saw only a man with a gun in threatening position. Over the years, many police departments have gotten away from such distinctive headwear as the eight-point uniform cap and the campaign hat. It’s understandable: They can be uncomfortable, they take time to put on when getting out of the patrol car and they can even impair your upward field of view during a search. At the same time, though, their distinctive silhouette can greatly help when one officer sees another in dim lighting or when they’re backlit. There’s an instant recognition factor, which is worth considering.

The Halo Effect
Some years ago in southern New England, I spoke to a grand jury in Case Two. Uniformed officers were making an arrest at gunpoint in a restaurant parking lot under less-than-optimal lighting conditions. An off-duty cop from the same department emerged from the restaurant with his small .32 pistol drawn and aimed at the suspect. He was coming from the opposite direction, meaning that he was facing the officers with the suspect in between, and his gun muzzle was oriented toward the uniformed patrolmen. They shouted at him to drop his gun, and when he did not, they pulled the triggers of their .40-caliber pistols. The bullets proved fatal to the young off-duty cop.

The officers who fired were cleared by the grand jury because they had acted with objective reasonableness. An unidentifiable man had pointed a gun in their direction and refused to obey lawful commands. One can only assume what I call the “halo effect.” We have so much ego invested in being the good guys that, subconsciously, we expect everyone else to see that halo over our heads. I suspect that in his last moments, the off-duty cop in Case Two thought the uniformed brethren were shouting at the suspect, not him. This is why it’s absolutely critical for plainclothes officers to remember that even cops who know them can’t always recognize them in the dark, and the unidentifiable officer must always obey the commands of the identified officer, who is usually (but not always) in uniform.

Only Human
Case Three was a tragic blue-on-blue death that occurred decades ago in an eastern city. A policy change had been announced: Nickel-plated service revolvers could no longer be purchased for duty. One young officer did not get the fine print of the order: Previously approved nickel guns were “grandfathered” in, and those who had them prior to the new order could keep them. That young officer came upon the scene of a man holding a nickel-plated Colt Detective Special on another man. When he barked a command to drop the gun, the guy with the Colt turned toward him, and the uniformed policeman fired with fatal results. It turned out that he had killed a detective who was making an arrest with a grandfathered nickel gun. The officer who fired testified that when he saw the nickel finish, he determined that the man holding that gun couldn’t possibly be a cop.

In Case Four, an off-duty cop responded to a violent disturbance in his apartment building with his service weapon in one hand and his badge in the other. He wound up proning out a suspect on the floor. Responding uniformed officers came up the stairs behind him, saw only the gun and ordered him to drop it. They saw an impatient movement of the left hand, but the right hand did not drop the weapon. On the next louder command, the man with the gun began to turn toward the officers. Seeing the weapon coming toward them in the hands of a non-compliant suspect, they fired, killing the off-duty brother. Only later did they determine that his left hand was gesturing with the badge; at the scene, tunnel vision had sucked the responders’ vision toward the deadly weapon in his right hand.

Any of us could find ourselves on one side or the other of a confrontation such as this. We must always remember certain human factors. Tunnel vision will, more likely than not, occur. Focused on the gun, we may not see the badge in a hand or on the belt. Your shield or other identifier must be held in a conspicuous position. If your free hand holds it high, slowly rotating it, officers approaching from the rear or the flank can better see it. More human factors: We turn toward startling sounds, and “where the head goes, the body follows.” The unidentifiable officer needs to remember this, trying for discipline to keep that from happening, and expecting sudden police commands so that when they come, they won’t trigger that sudden turn.

Finally, consider that it’s the gun in the unidentifiable officer’s hand that creates the perception of deadly danger to the responders and draws their fire. Consider that, in a dangerous situation, having the hand on the holstered weapon may be a better tactic. The draw to the shot, if necessary, will be similar in speed to coming out of Position Sul or some ready positions, but is much less threatening to a responding uniformed officer who has not yet identified the plainclothesman. 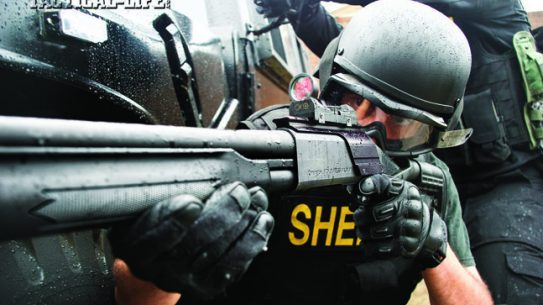 The debate over today’s military-style police and SWAT responses!