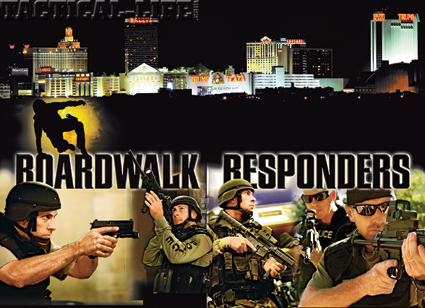 Whether a crisis occurs at a home, mall, school or high-rise casino, ACERT must stay “Always Turned On” to get guns on target quickly and work all the angles to end incidents safely and with minimal force.

Officer Kevin Hincks assumed a low crouch as he approached a victim lying on the floor of the mall’s department store. Covered by the charged HK UMP of an officer alongside him, Hincks lowered his rifle and grabbed the collar of the victim’s shirt before pulling him behind a service desk that provided some cover. Realizing the victim was shot in the thigh, Hincks told him to apply direct pressure to his wound then resumed covering the aisles and lanes in front of him.

The gunman was less than 20 feet away when Hincks made his move, but seeing that other officers attempting to negotiate distracted the man, Hincks decided to take the chance to save an innocent life. With the help of the store’s surveillance system and a floor plan with a map of fire exits posted to the wall, it took only minutes for the officers to close on and contain the gunman, who earlier walked in and opened fire with a handgun. Despite heroic attempts to negotiate his surrender, the gunman later raised his weapon at the officers who had surrounded him and forced them to open fire and end his life to protect their own. Fortunately, these events were all part of a training scenario designed to test the capabilities of the Atlantic County Emergency Response Team (ACERT).

The seaside resort of Atlantic City boasts glamorous hotels, shopping malls and casinos, but outside the well-protected entertainment districts are tough neighborhoods where patrol officers are not permitted to enter alone. To combat violent crime in these and other areas of Atlantic County, police departments throughout the jurisdiction combined their efforts with the formation of ACERT.

Managed and led by the Atlantic County Prosecutor’s Office, the team is staffed by over 50 officers from various county and local agencies who continue to work their regular shifts while remaining on call to respond to any crisis the team is ordered to. 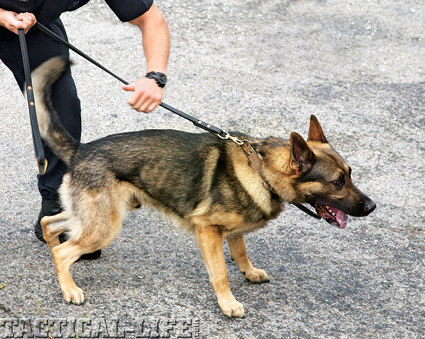 “When ordered, the K-9 sprinted to the suspect’s position and clamped its jaws onto his arm before pulling him down onto the dirt.”

Responsible for 671 square miles of urban and residential communities and a population of nearly 300,000—not counting summer’s influx of tourists and temporary residents—the team’s operating area includes every inch of the county and their callouts involve all types of crime. Serving high-risk arrest and search warrants makes up the bulk of their workload, with cocaine and heroin trafficking from New York and Philadelphia contributing to a high operational tempo. Less common, but often posing a greater risk to both officers and civilians, are the hostage takings, barricaded suspects, active shooters and manhunts that require the high level of training, proficiency, and resources ACERT was created to provide.

TEAMS FIREPOWER
With multiple agencies detailing officers to ACERT, the team’s weapons represent the preferences of their respective commands. Not surprisingly, much of the team is armed with the Smith & Wesson M&P15, a 5.56mm AR-15 platform featuring selective-fire and Picatinny rails for mounting optics, lights and other tools.

Heckler & Koch’s .40-caliber UMP and 9mm MP5 are also represented, and are the preferred weapons of several of the team’s longest-serving operators because of their compact size and reliability. A variety of EOTech and Trijicon optics are fitted to these rifles in addition to Insight and SureFire lights with the SureFire M900V Foregrip LED being the most popular. Sig P229R and Glock 22 sidearms, both chambered for .40-caliber ammunition, are the two most prevalent models in the team’s holsters and are all fitted with removable Insight lights. Each operator’s woodland camouflage pattern uniform is partially covered by an MSA vest that holds Level IV ceramic plates for ballistic protection and a variety of tools in MOLLE-compatible pouches. A GENTEX ballistic helmet completes their standard protective kit.

To allow movement and staging during high-risk operations, an armored Lenco BearCat, procured through a Department of Homeland Security grant, is permanently assigned to the team. It saw regular action in 2006 when area schools received a series of written bomb threats. To safely approach and search the targeted schools, the BearCat provided protection for ACERT and supported bomb disposal technicians until the threats were finally stopped after the team made a series of arrests. A fleet of other vehicles is also available for ACERT’s use, including the OEM’s mobile command post where ACERT commander Lt. Sean Clancy and team leader Sgt. Tom Finan routinely oversee major operations. With the team and the Atlantic County Prosecutor’s Office for over a decade, Clancy and Finan were founding members of ACERT and are now a major force in ongoing efforts to standardize equipment and develop it into a full-time capability for the county. The pair pushed programs and equipment for tactical medicine, explosive breaching and an expanded sniper team. All are set to become a reality, which will greatly increase the safety of officers assigned to ACERT and the communities they protect.

Qualifications
Only volunteers staff ACERT and each must first be selected by their own agency before competing in the team’s competitive tryout process. Following selection, all new recruits complete a 40-hour course in basic SWAT tactics before they’re considered a full member. After initial certification, operators continue to train as a team a minimum of 16 hours per month and must pass an annual physical fitness test to stay active.

Officers also have the option of choosing to enlist in the county Hostage Negotiations Team (HNT). Intended to de-escalate situations and facilitate their positive outcome using communication rather than force, these men and women respond to many callouts alongside ACERT’s traditional operators. All of the team’s formal training is conducted under SWAT standards developed by the National Tactical Officer’s Association (NTOA), which the team follows on actual operations.

To keep their skills sharp, ACERT frequently conducts exercises like the one in the mall described above and also trains with other teams in the area, including the Atlantic City and Cape May County Regional SWAT teams, which have mutual aid agreements in place to assist one another in the event of a large-scale crisis that might exhaust the resources of a single agency. Many of these events are full-scale exercises using Simunition FX rounds that focus on major and populated infrastructure.

Always Ready
Whether a crisis occurs at a home, mall, school or high-rise casino, ACERT is expected to get guns on target quickly and work all the angles to end it safely and with minimal force. This takes training, equipment, and especially dedicated officers with the knowledge, experience, and skills to take on the county’s worst criminals. Mirroring the motto of their county’s largest city, ACERT stays “Always Turned On.” 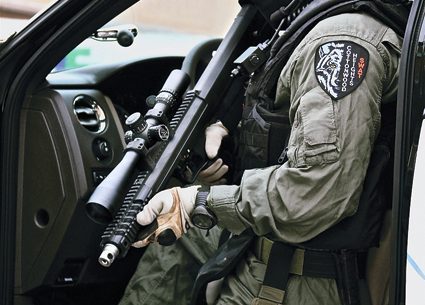 Whether a crisis occurs at a home, mall, school or high-rise casino, ACERT must…