0
SHARES
8
VIEWS
Share on FacebookShare on Twitter
Boeing and BAE integrated a tactical laser system on the Mk 38 Mod 2 chain gun. The laser can be used as a weapon or as the gun’s targeting system.

The U.S. Defense Department is on the threshold of a revolutionary technological change that is in many ways comparable to the adoption of firearms in the 17th century. Because technology drives military strategy, the implications of this have yet to be determined or fully appreciated, but they will likely be profound. So, what new technology will alter the future of warfighting? For one, in just a few years, the U.S. armed forces may employ directed energy weapons, an idea that isn’t new but is considered farfetched—death rays have long been a science-fiction staple. Although they’re not really visible until their energy diffuses on a target, brightly hued laser beams have been the most commonly wielded futuristic-movie weapons for decades.

Directed energy is to current weapon systems as current weapon systems are to edged weapons. Present-day weapons are often collectively described as “kinetic” because they rely on the striking power of projectiles to destroy targets and utilize operating concepts that are completely distinct from that of directed energy, which involves no projected mass but only energy in the form of electromagnetic radiation using amplified light (lasers) or amplified microwaves (masers). Other, less common forms of directed energy use particle beams (technically micro-projectiles) or sound waves. 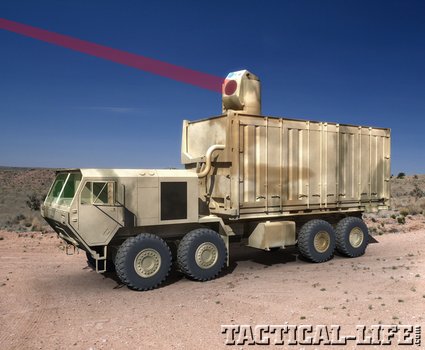 The HEL MD is mounted on a U.S. Army HEMTT heavy truck. Despite its size, the system is highly mobile. In real life, the laser beam is invisible.

Many armed forces and defense manufacturers around the globe have been working on lasers for years, but no one has produced a more spectacular outcome than aerospace giant Boeing. Working with the U.S. Air Force, Boeing produced the YAL-1 Airborne Laser Testbed, a modified 747-400F jetliner with a chemical laser system capable of emitting a megawatt-class beam that could destroy a ballistic missile in flight. After a low-power test in 2007, the YAL-1 successfully completed high-energy tests in 2010, destroying two missiles. The Airborne Laser Testbed now rests in the Davis-Monthan Air Force Base’s “boneyard,” after funding ceased in December 2011. The YAL-1 was undeniably expensive, but its achievements are unique, unmatched by any other system and placing Boeing in the vanguard of military laser development.